Crostini make epic party appetizers, of course, but they’re also delicious as a dipper for our Beefy Taco Soup! Try serving with our fresh Pico de Gallo and some Homemade Guacamole! 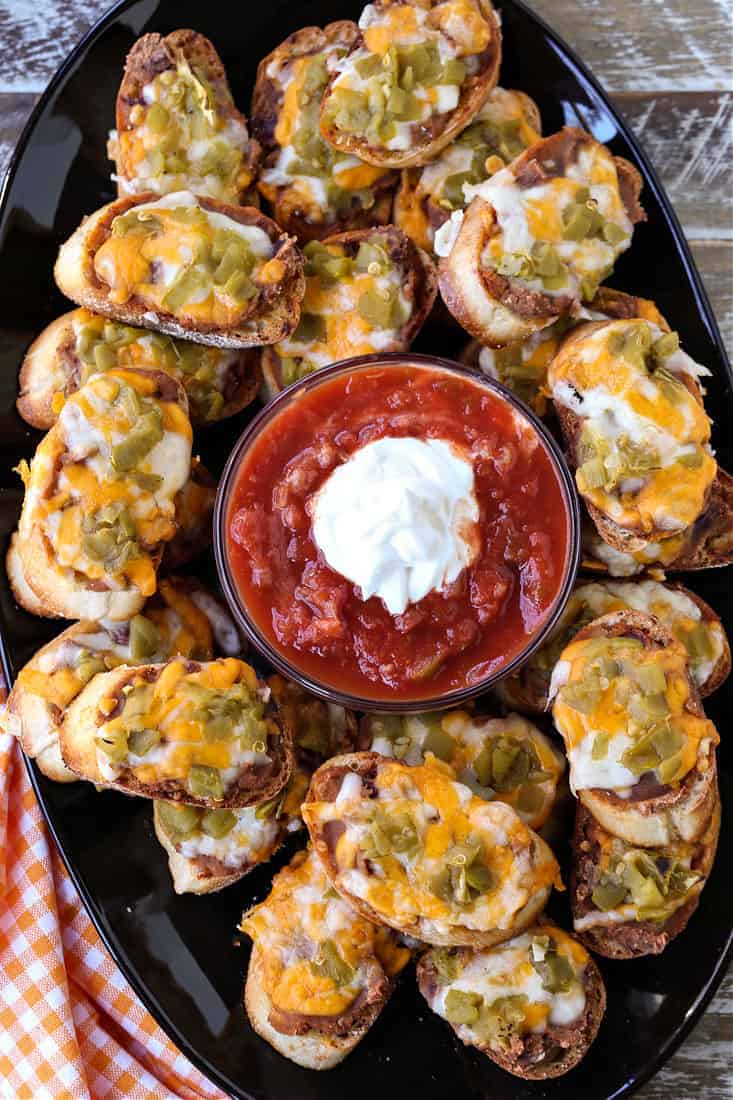 How To Make Crostini

There are some basic steps to making a really good crostini recipe, like these Cheesy Taco Crostini. First you have to get the right bread, any type of crusty loaf like French or Ciabatta. Stay away from a soft, more “bready” loaf that won’t crisp up the way we want it to.

Now it’s time to figure out what kind of crostini you want to make! For this recipe, we’re using refried beans, Mexican blend cheese, taco seasoning and diced green chilis. 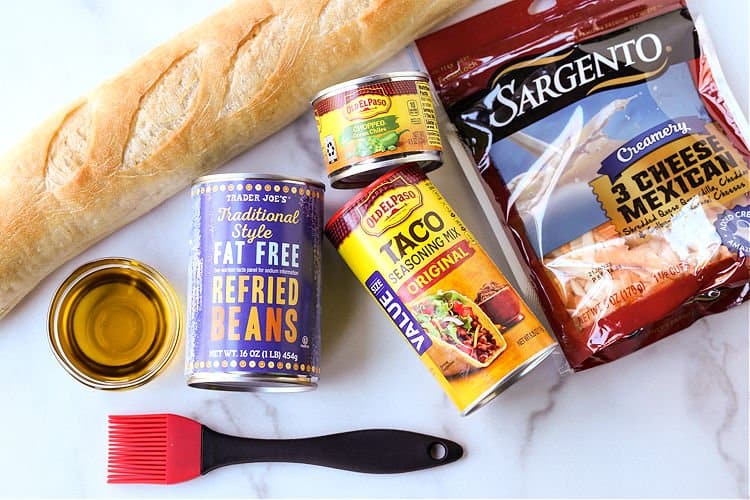 Next step is slicing the crostini into about 1/2 inch thick slices, slightly on the diagonal. Cutting the bread on an angle isn’t just about a fancy presentation, it makes it easier to bite into because there isn’t a straight, sharp edge to the bread.

Brush the bread slices with oil and then season with taco seasoning and kosher salt. 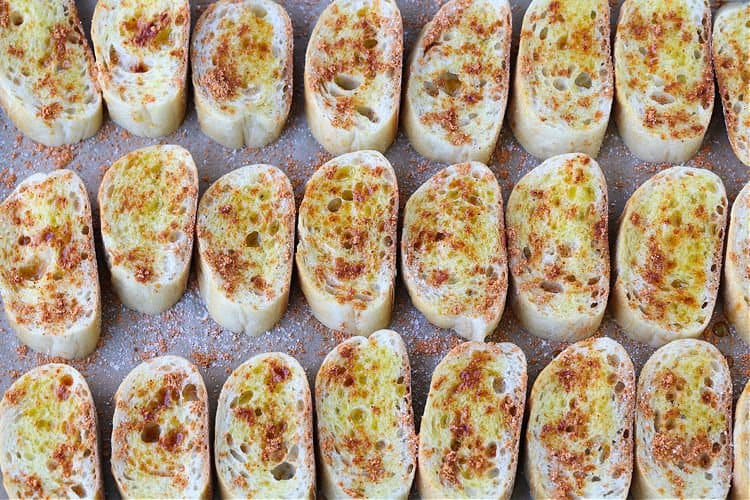 Get that into the oven and bake at 425 degrees for 10 minutes, until the edges are crispy and brown. Take the crostini out of the oven and let cool until you can handle the toast.

Spread a layer of refried beans on each piece of toast. You’ll need about 1 1/2 cups of refried beans, regular or fat free. It’s just shy of a 16 ounce can, but you can add as much or as little as you like. 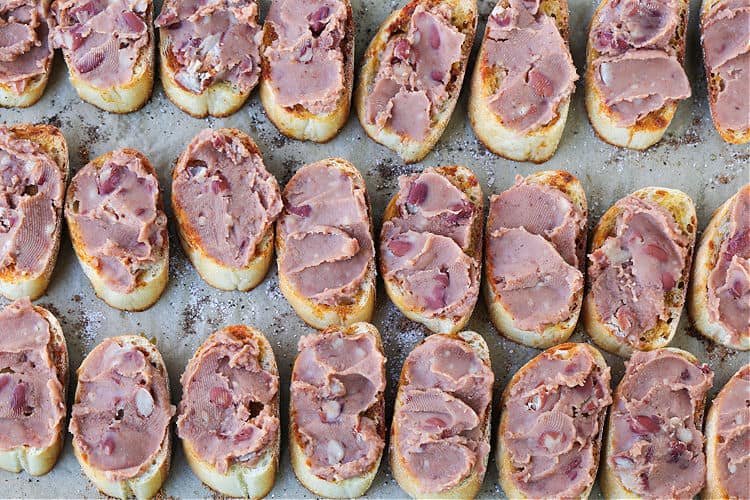 Top this Cheesy Taco Crostini with Mexican blend cheese and finally a small spoonful of diced green chilis on each toast. Get this crostini back into the oven or under the broiler for just a few minutes and it’s ready to serve! 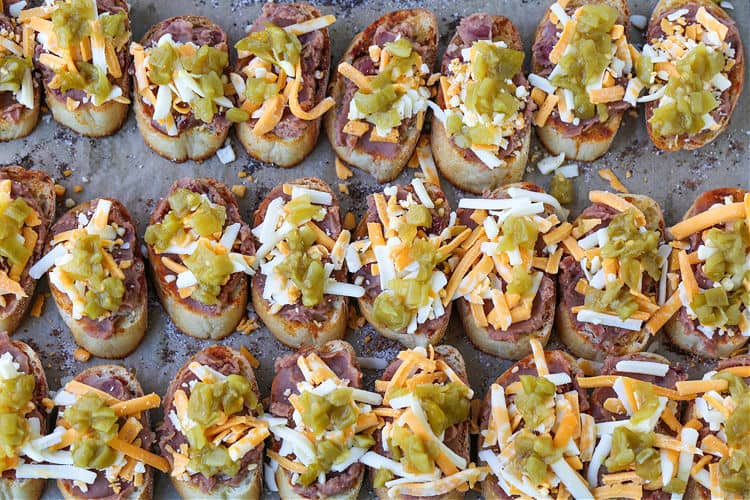 How To Serve This Cheesy Taco Crostini

Serve this taco crostini with all your favorite taco toppings! Homemade Guacamole, salsa or pico de gallo and sour cream are all favorites. A drizzle of hot sauce or sriracha is a good idea for those who like to spice it up, too.

Like we mentioned before, these crostini are also delicious used as a dipper in soup recipes like our Beefy Taco Soup and more! 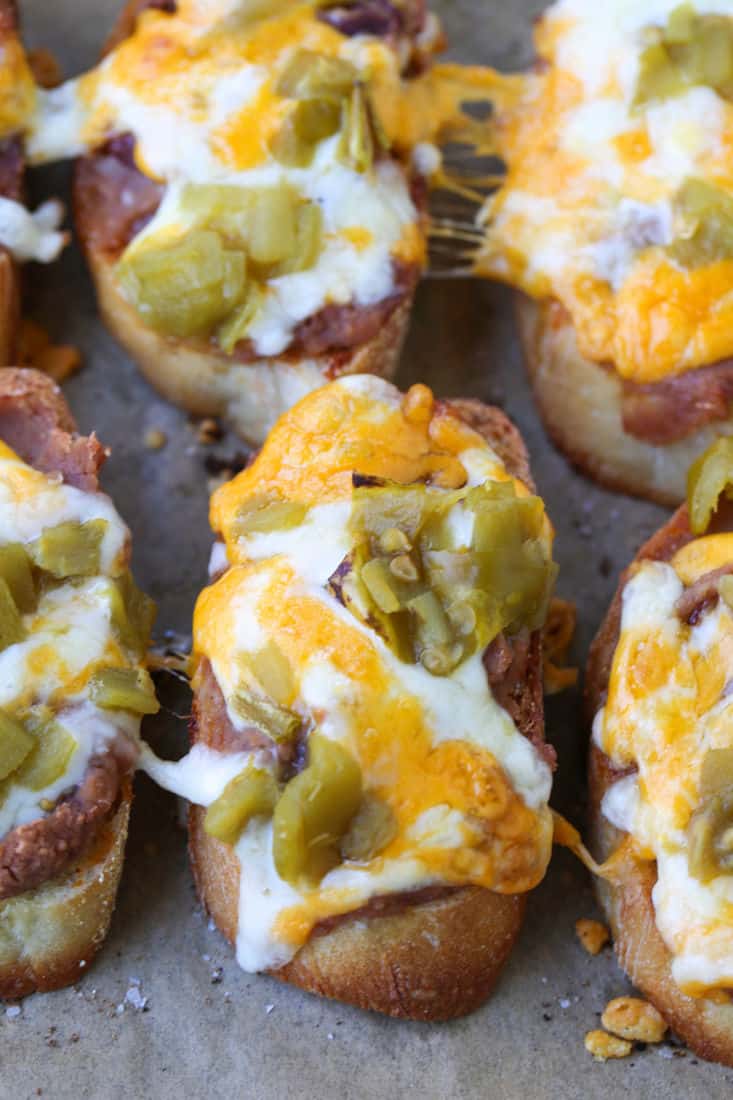 Other Topping Ideas For This Crostini Recipe

There’s so many different ways that you can make these fun taco crostini! Try adding different cheese like pepper jack for a little spice. A Mexican cheese like cotija would be delicious, although it isn’t a melting cheese, but you could combine it with mozzarella, monterey jack or cheddar.

Turn these Cheesy Taco Crostini into dinner by adding taco meat or shredded chicken! Our boys love anything taco or Tex-Mex flavored, so dinner is always going to be a hit when those flavors are involved. 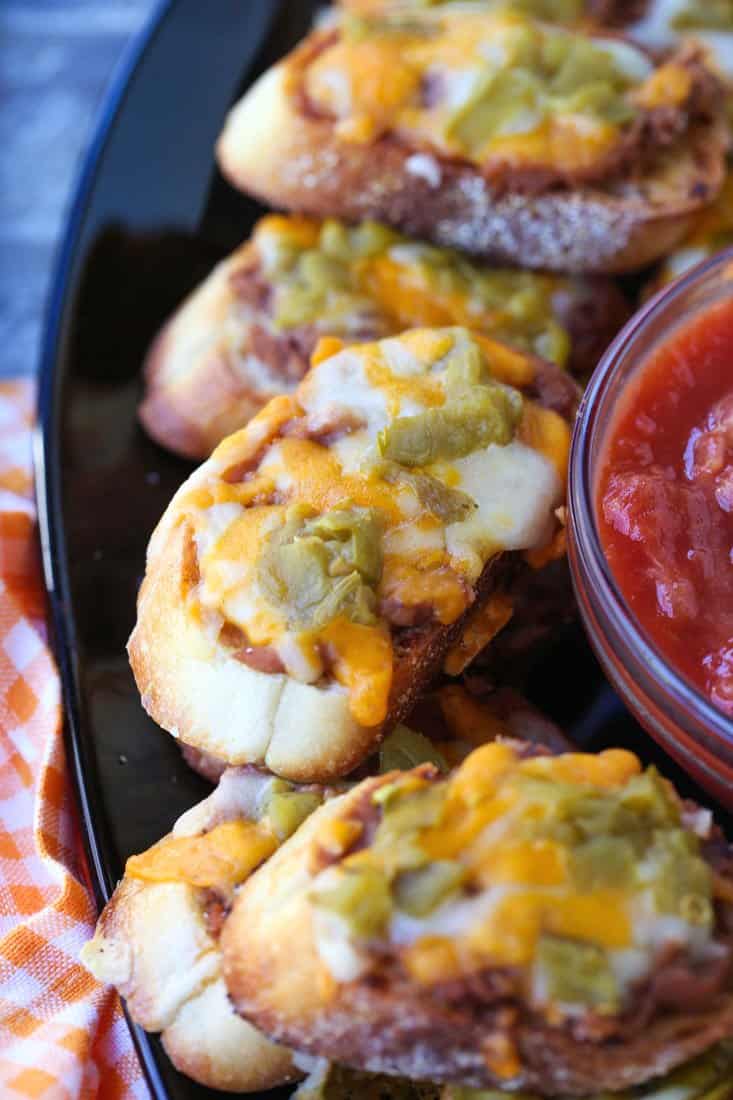 Can You Make Crostini Ahead Of Time?

Crostini is always best when it’s first made, the toast is super crunchy but not hard, the cheeses are all melted perfectly…but yes, you can make this appetizer recipe in advance. There’s a couple of different ways to do this, so stick with me.

If you’re really looking to save time, you can make this crostini recipe, bake, let cool and freeze. Then remove them from the freezer and let sit at room temperature while your oven is preheating. Bake at 375 for 10 minutes and you’re ready to serve! 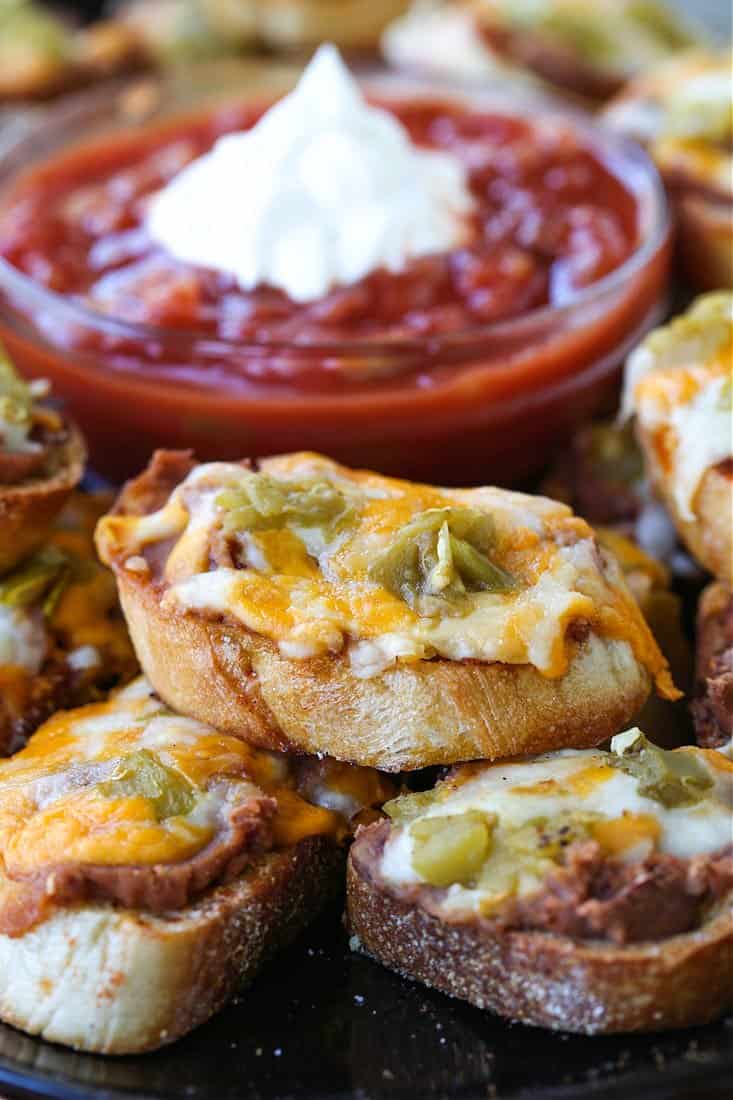 What’s The Difference Between Bruschetta and Crostini?

Not too much, but there are a few differences. Classic Tomato Bruschetta is a favorite appetizer of ours, so we make it pretty often. With bruschetta, the bread is toasted but not to the point where it’s super crispy like crostini.

With bruschetta you kind of want that crispy/soft (dare I say mushy??) combo like the fresh tomato toppings that soaks into the bread a little. For crostini, all you want is crunch. So crostini is baked until super crunchy and then topped with dryer ingredients, not a wet topping like a tomato bruschetta. 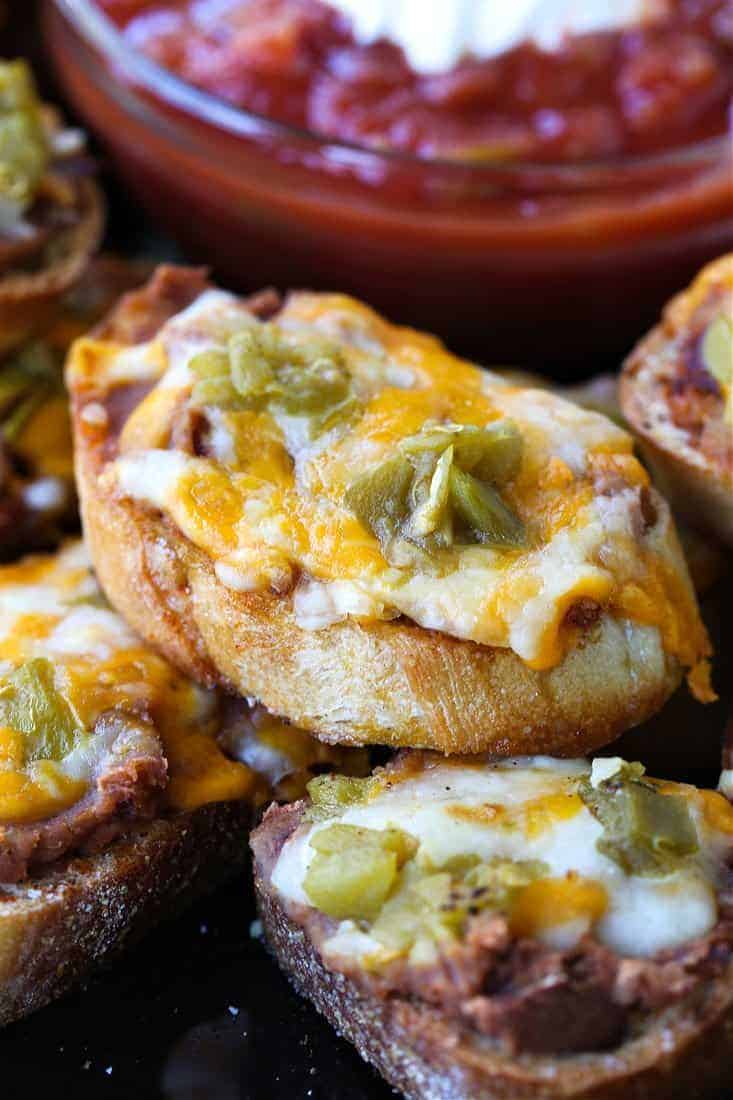 Dinners To Serve With This Cheesy Taco Crostini Recipe

We’ve got tons of fun party food to share with you guys! For more inspiration, head over to our Dinner Ideas menu! 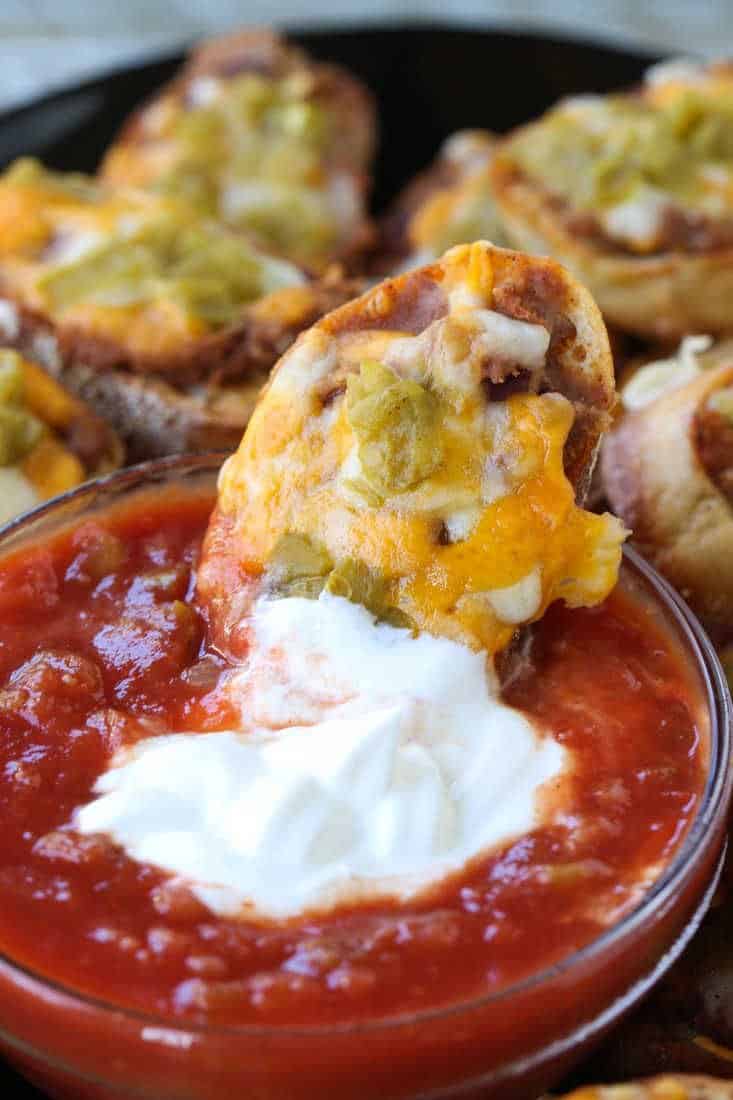 This Cheesy Taco Crostini can be served as appetizers or used as a dipper for taco soup! Serve with salsa, sour cream and guacamole for dipping!

Reheating leftovers: Place on a baking sheet in a 400 degree oven for 5-7 minutes or until the cheese has melted.

Reheating from frozen: Place crostini on a baking sheet and bake at 375 degrees for 8-10 minutes or until the cheese has melted and the center is warm.