This New York Strip Steak tastes just as good as if it came from a steak house! Tender and juicy steak flavored with fresh herbs, garlic and butter. It doesn’t get much better!

We love making strip steak for special dinner nights at home. Looking for something besides wine to drink with steak? Try this Amaretto Sidecar Cocktail made with Homemade Amaretto! 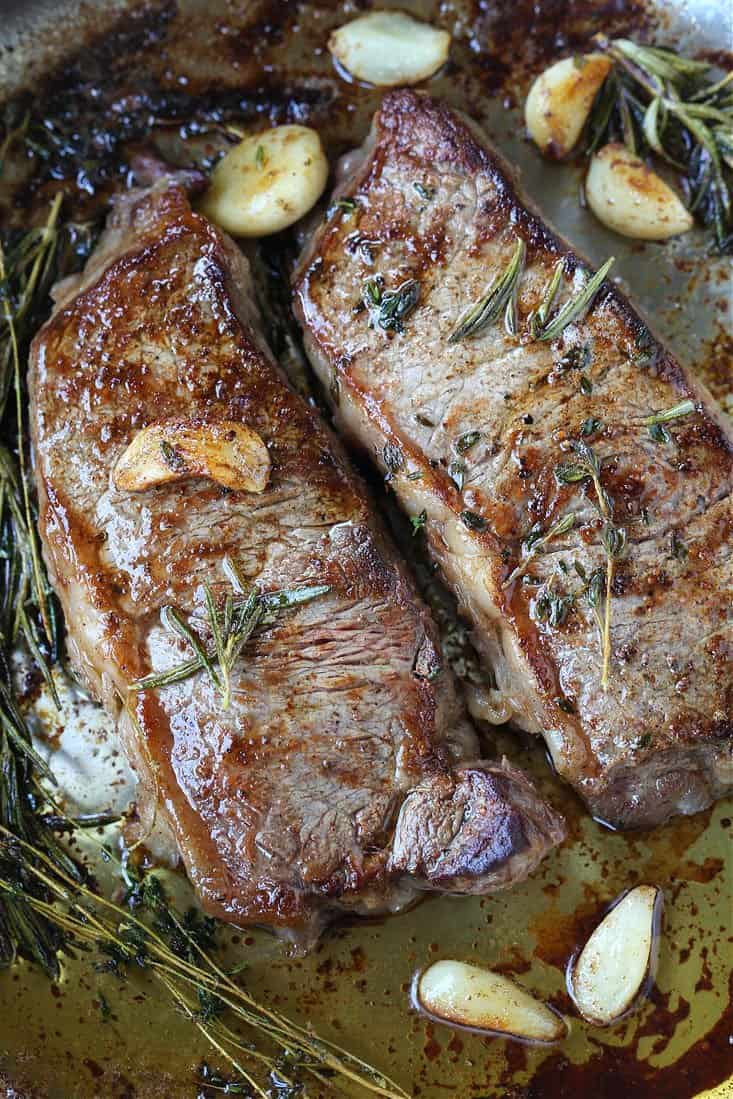 Everything is so expensive these days, so instead of having a pricey night out, make a New York Strip Steak dinner at home instead! Even though a strip steak can be a little expensive, it’s still way cheaper than paying restaurant prices.

Add a potato side dish and a roasted vegetable and you’ve got a dinner at home perfect for that special occasion. The most tender, juicy steak you’ll ever make at home is finished off right in the oven!

What You Need To Make New York Strip Steaks

First of all, try to get the best quality strip steak that you can find. This might mean heading out to your local butcher instead of the grocery store, but try to find a prime cut of meat instead of choice.

New York Strip Steak: Strip steaks are most often a boneless cut of beef with a lot of marbling. The marbling in the meat makes these steaks very tender and full of flavor. We like to cook with larger cuts, about 1 inch thick.

Fresh Herbs: Rosemary and thyme are our favorites with a strip steak, but you can play around with those ingredients, too. 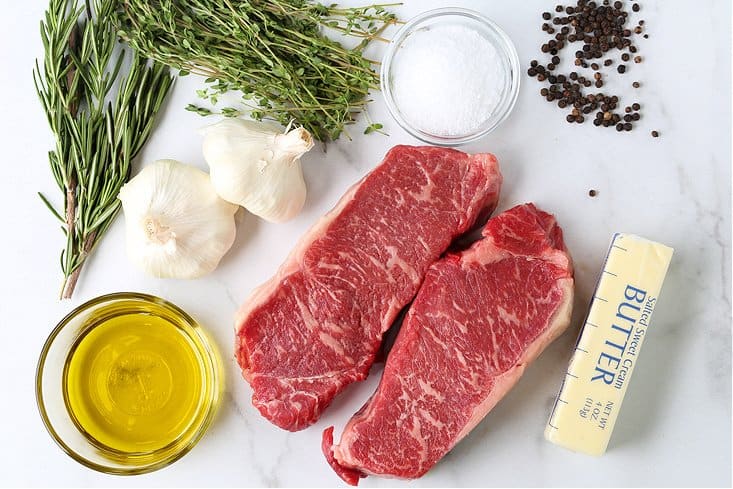 Butter: Salted butter for us, it adds more flavor. And yes, even though we’re generously salting the steaks.

Garlic: Go for the amount that you feel is right:) The garlic in this New York strip steak recipe really just flavors the oil that you use to baste the meat with. So in our opinion, the more the better.

Olive Oil: Since we’re searing these steaks at a high temperature, olive oil wouldn’t be a good choice on its own. Since olive oil has a relatively low smoking point, you typically don’t use it with higher temperatures. But since we’ve added tons of butter to the mixture, the olive oil will hold up and add the flavor that we’re looking for.

Kosher Salt & Pepper: To this day I haven’t found pre-ground black pepper that really adds the flavor that fresh ground pepper does. So if you can use a pepper grinder, that’s the best bet. And always, always Kosher salt for it’s coarser texture and better flavor. 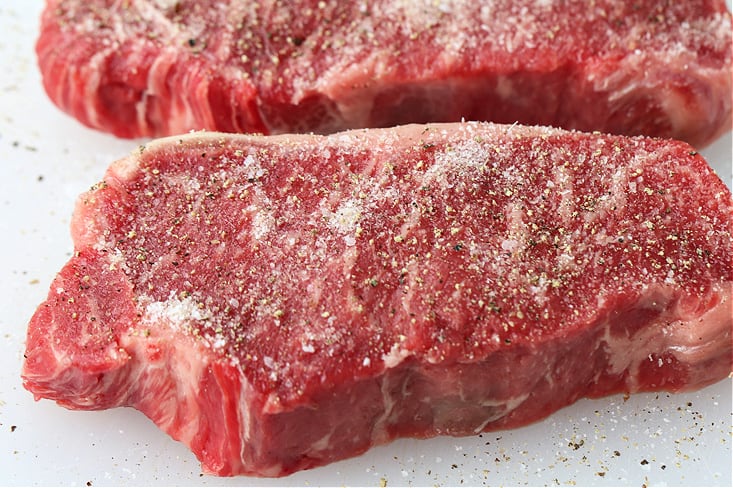 How Do I Know When My Steak Is Done?

The best way to know when your steak is done to the right temperature is by using a meat thermometer.  These temperatures are for when you take the meat out of the oven, then it will rise a few more degrees during the resting period. 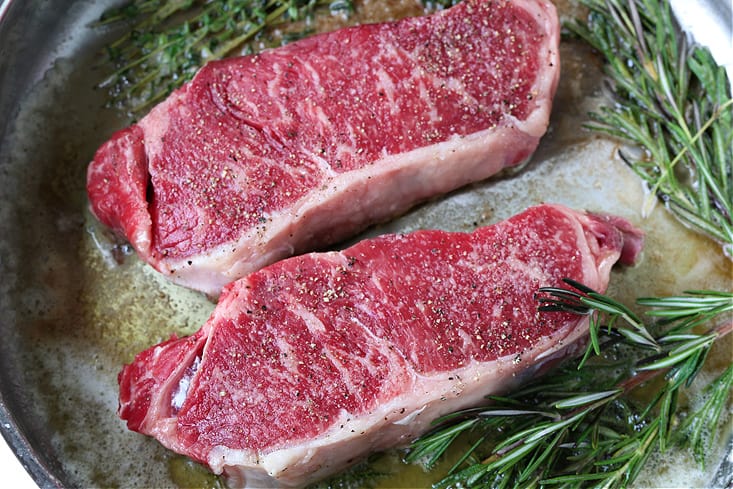 Cooking a strip steak over 150 degrees isn’t recommended as it will become tough. If you don’t prefer your steak on the rare side, then the most I’d cook this steak to is medium well.

New York Strip Steak is a little pricey so try not to overcook it and dry it out. 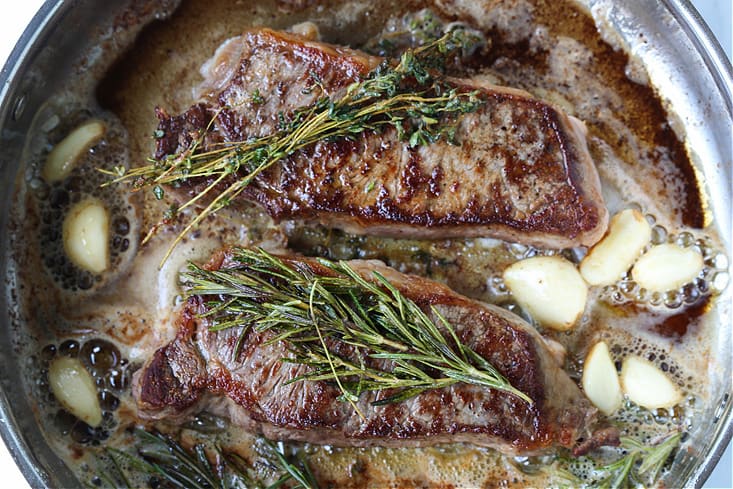 What Is The Best Pan To Use To Cook Steak In The Oven?

Cast iron skillets do work nicely, but if you don’t have a cast iron pan, no worries. Usually we grab a heavy bottomed, stainless steel skillet and that works just fine. As long as you have a sturdy skillet that’s oven-proof, these steaks will come out beautifully! 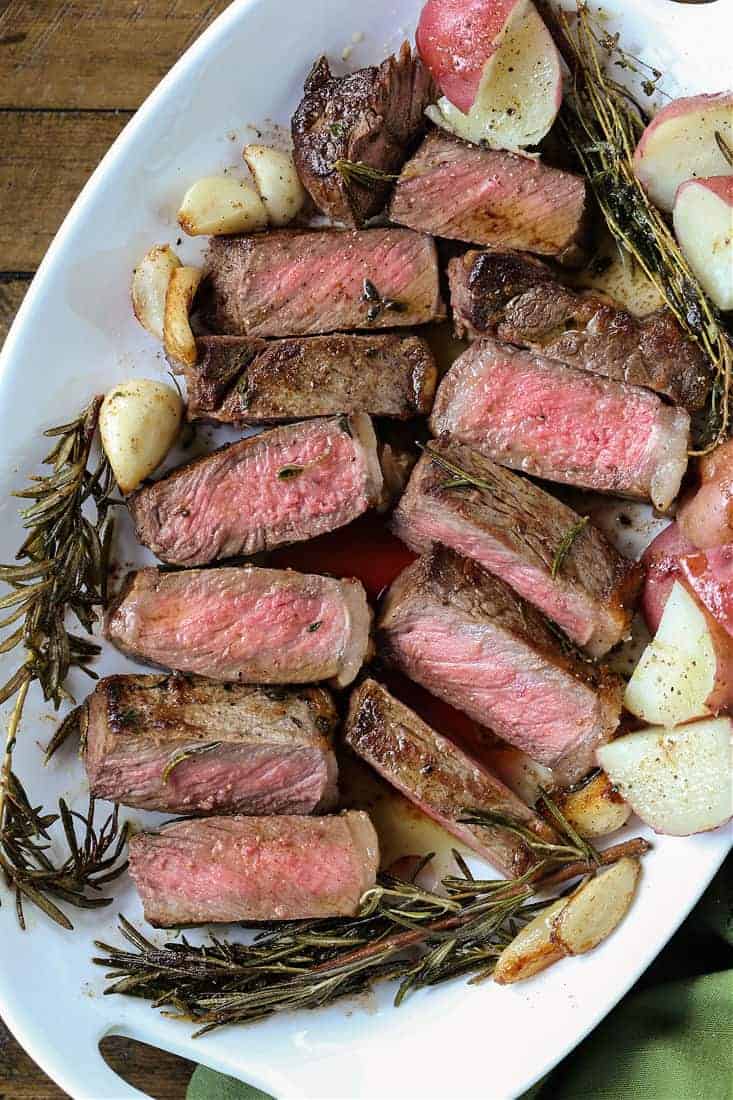 Should I Trim The Fat Off A Strip Steak Before Cooking?

Definitely not. The layer of fat on the outside of a strip steak is what gives it so much delicious flavor. Of course, you don’t have to eat the fat; after it’s given its flavor to the meat you can trim it off as you’re eating.

Also, you can sear the fat side of the steak in the skillet before it goes into the oven. This will crisp up and render the fat down slightly. 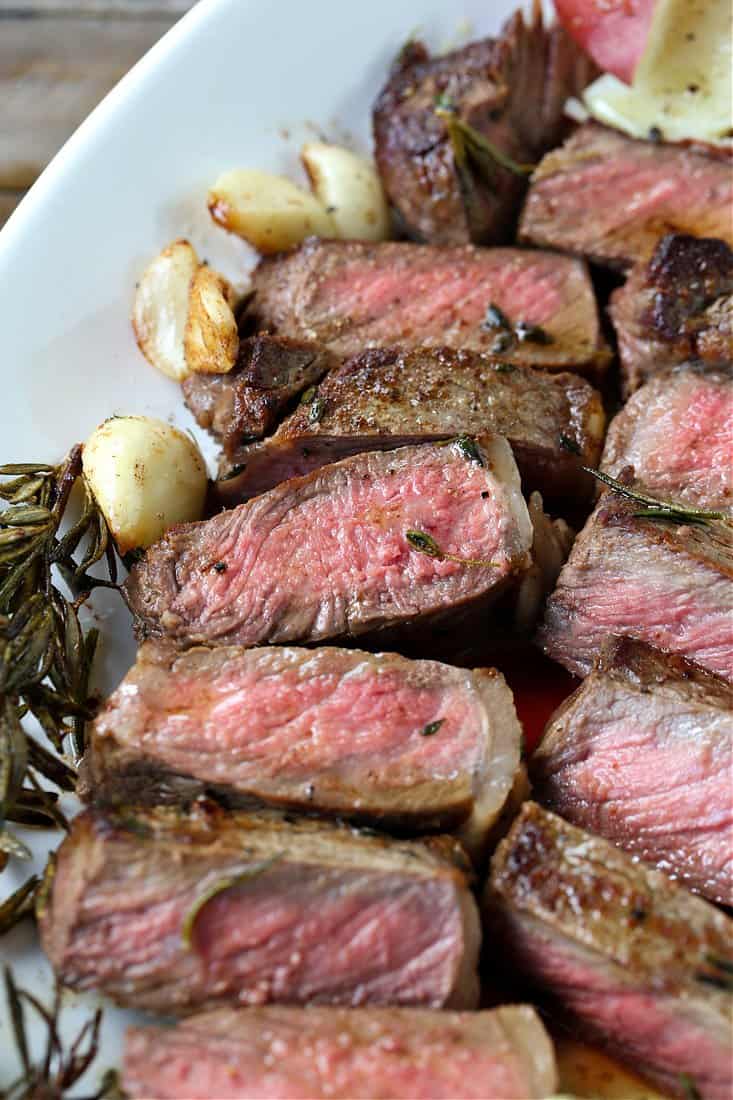 What Sides Go Best With A Steak Dinner?

Because you can’t have a steakhouse dinner without the sides! We’ve got SO many delicious side dishes to go with this NY Strip Steak dinner, it’s going to be hard to choose. Make a couple, make a few. 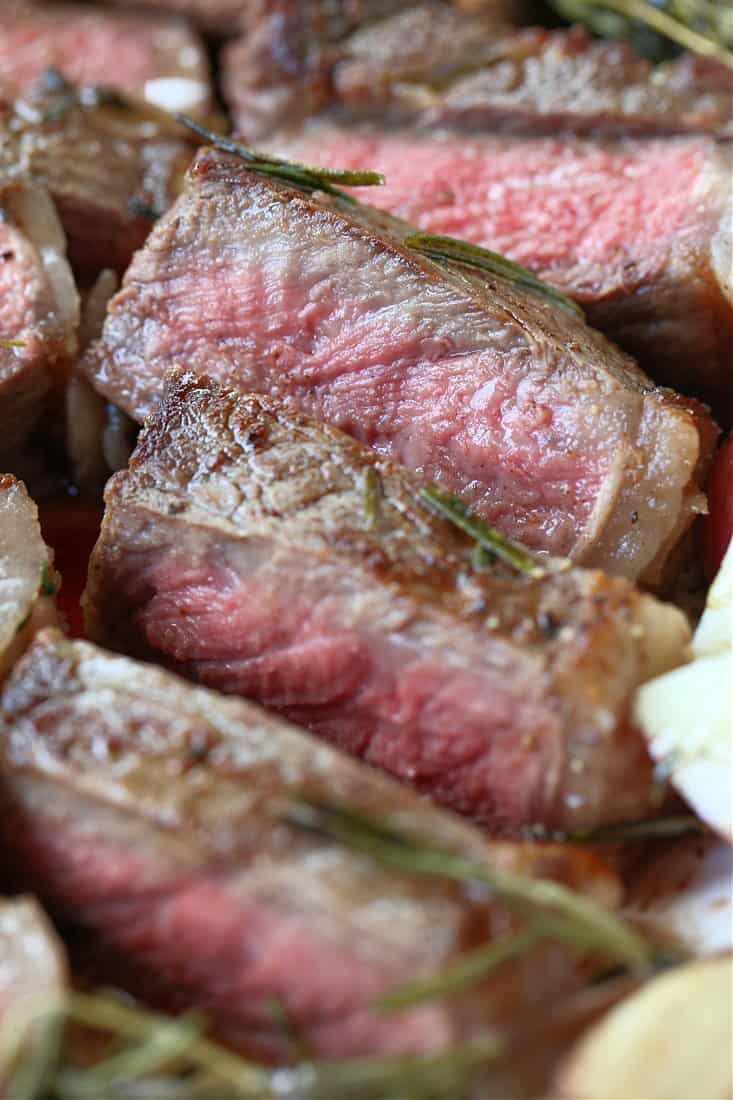 Can I Make This Steak Recipe On The Grill?

Of course you can make strip steaks on the grill, but for this recipe stick to the oven. For one, there’s a lot of butter going on with these steaks and that will most likely cause a flame up on the grill.

But if you’re really looking to make steaks just on the grill, here’s how to do it. 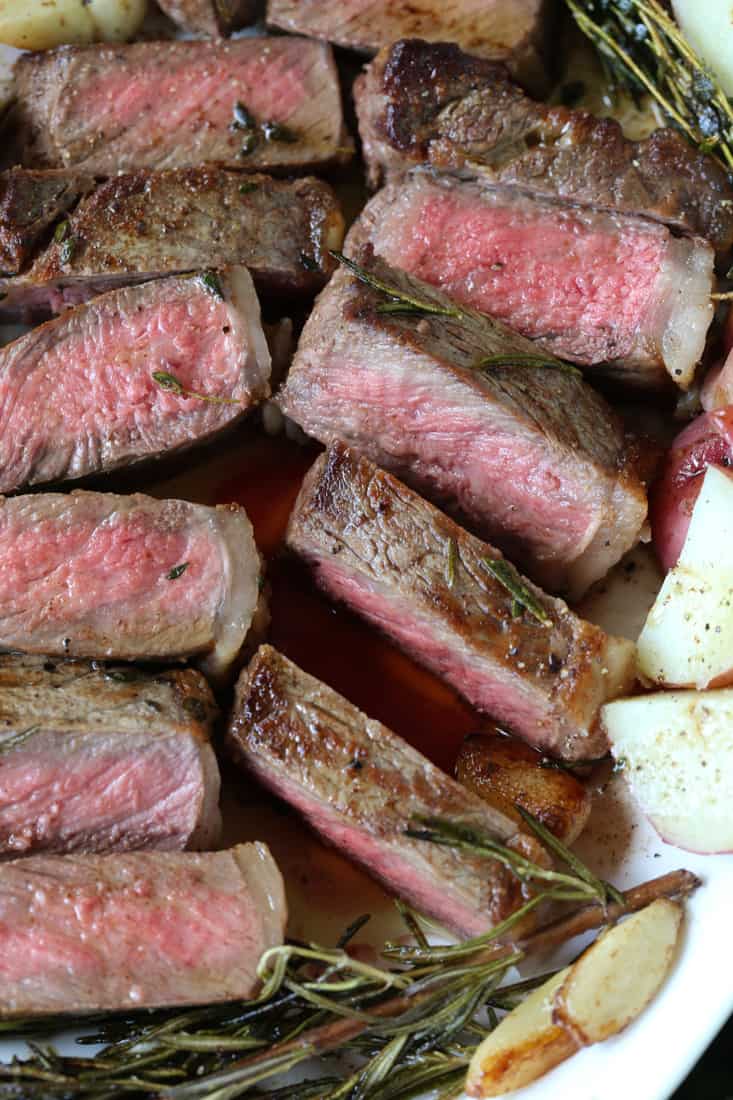 Perfectly cooked New York Strip Steak is so easy to do at home! All you need is fresh herbs, garlic and butter to have the most juicy, tender steak dinner ever!

The best way to know when your steak is done to the right temperature is by using a meat thermometer.  These temperatures are for when you take the meat out of the oven, then it will rise a few more degrees during the resting period.

Strip Steaks are anywhere between 10 ounces and 1 1/2 pounds. Any size will work with this recipe (you’ll need to adjust cooking times for larger steaks), but you’ll need at least two 12 -14 ounce steaks to feed four people.