These Whiskey Glazed Chicken Wings are crispy fried to perfection! It’s all about the addicting whiskey glaze on these chicken wings, get the napkins ready!

Looking for more addicting and easy chicken wing recipes? Try these amazing Salt and Vinegar Chicken Wings or these fried Parmesan Chicken Wings. I promise you won’t be disappointed! 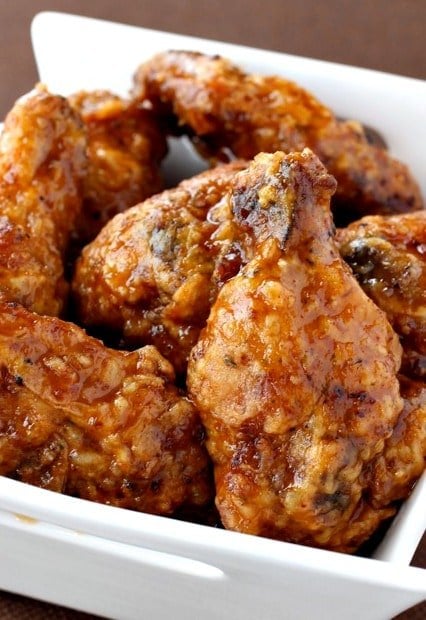 There’s just something about wings that says party food to me. Or game time food. Watching the game with a whole plate of wings in front of me – it doesn’t get much better.

These Whiskey Wings are a take on the Chicken Fried Ribs with Whiskey Glaze that we made. They were crazy good. And some people thought I was crazy – who would ever think to deep fry a rib but me?

Until they tasted them that is.

The whiskey glaze is a recipe all by itself that you might want to have handy. It’s a sauce that would be good on all kinds of things like instead of using BBQ sauce on your pulled pork, toss it with this whiskey glaze. Don’t want to fry? Grill up some chicken and pour the glaze all over it. Use it as a dip for chicken fingers…or drizzle it over steak before serving.

But back to the wings…

How to Make the Best Fried Chicken Wings Ever

First I seasoned these wings then baked them. It’s an extra step but then the wings are cooked through and they only have to spend a couple of minutes in the fryer just to crisp up the coating. 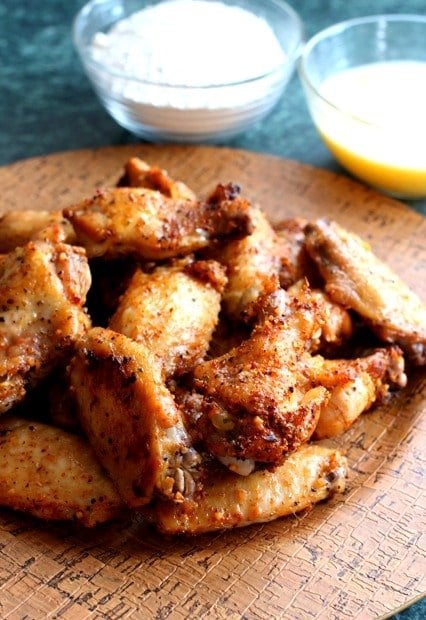 Just a side note, if you stopped at this point and dipped these oven-baked wings in that whiskey glaze you’d have some awesome tasting wings. IF you wanted to skip the deep fry.

But I have to ask you to try the deep fry this time…you won’t be disappointed….

So after you bake them, coat them in some seasoned flour and then the can take a dip in the hot oil.

Let them drain off and cool a little and then toss them in that whiskey glaze. 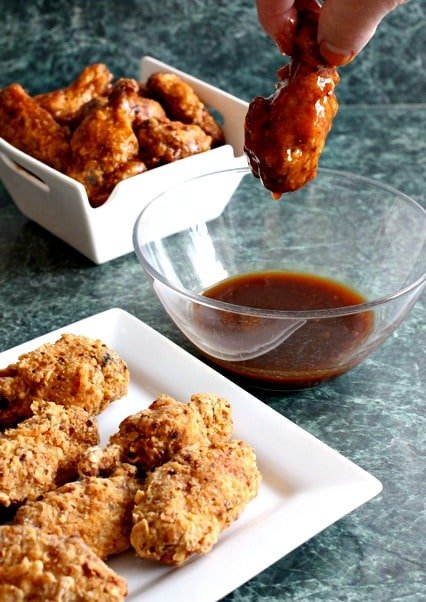 Lot’s of napkins for these wings…and lots of beer! 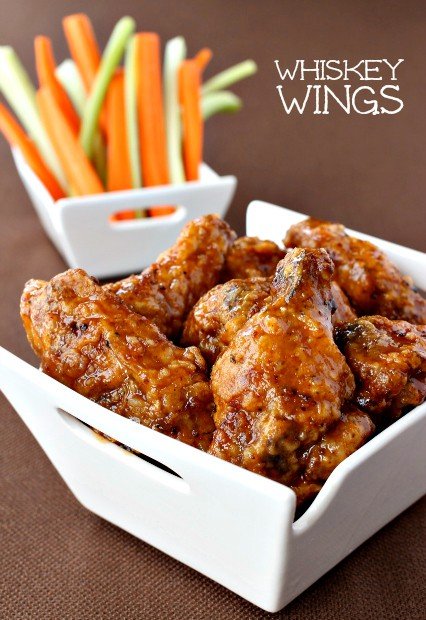 These wings are deep fried and tossed in an amazing homemade whiskey glaze. An easy chicken wings recipe that’s so addicting there won’t be any left!

For the Whiskey Glaze

If you don’t have a thermometer for the oil, stick the handle of a wooden spoon in the oil. If it bubbles then your oil is ready.
Alternately, if you don’t want to fry, you can stop after the wings have been baked, skip the flour coating and just toss them in the whiskey glaze and serve.