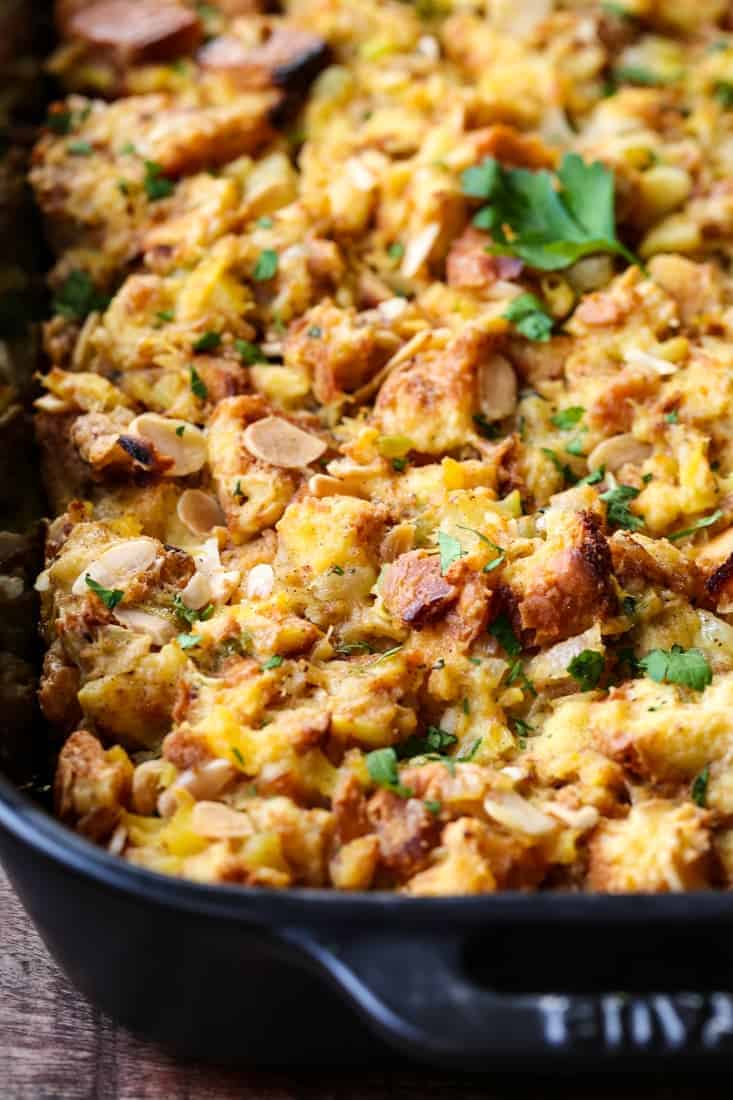 Seriously Delicious Pineapple Stuffing is our version of classic pineapple stuffing! This stuffing recipe goes perfectly with your holiday ham or turkey!

Serve this pineapple stuffing with your Favorite Baked Ham Recipe or a juicy Roasted Turkey! But honestly, we think our version of this stuffing recipe goes amazing with almost any dinner!

How We Made This Pineapple Stuffing Recipe Taste Better

OK, so we mostly enjoy our stuffing recipes with sausage. That’s just the way we like it and have always had it. But in doing a little research on stuffing recipes for Thanksgiving we would constantly came across Pineapple Stuffing.

Pineapple Stuffing is basically crushed pineapple, bread, eggs and sugar. And it actually tastes as boring as it sounds, to be honest.

We made it a couple of times following traditional recipes and then started over.

Instead of using plain white bread, we switched to a buttery brioche bread for more flavor. Then we added a custard-like filling with vanilla and cinnamon flavors to make this stuffing taste rich and sweet, bot not at all bland. 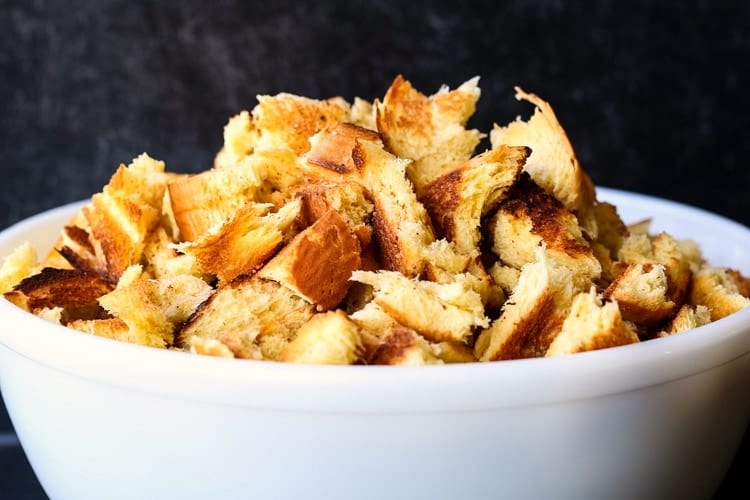 You’ll need about 14 cups of toasted brioche bread cubes to make this pineapple stuffing recipe. I grabbed two loves of bread and used about one and a half of the loaves, just to give you an idea of how much you need to buy for 14 cups of bread.

For this stuffing we broke the toasted bread into pieces with our hands and made the pieces slightly smaller than what we do for our favorite sausage stuffing.

The smaller bread cubes will soak up the cream filling a lot better than larger pieces of bread. 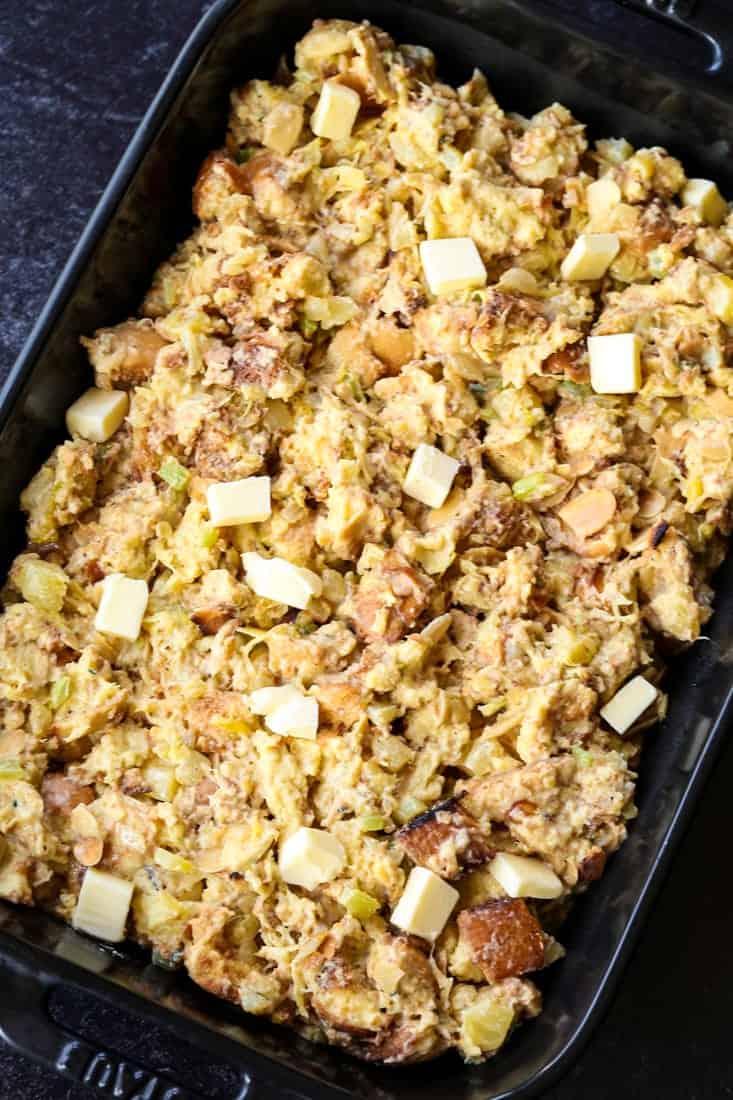 How Do You Make Pineapple Stuffing?

Once you have your toasted bread cubes, you’re going to whisk a few eggs together with half and half, pineapple juice, vanilla, brown sugar and cinnamon.

Of course you add in crushed pineapple, a few more seasonings and about a cup of sliced, toasted almonds. We really like the addition of almonds in here for a little texture but you can leave the nuts out if you’re a nut-free house. 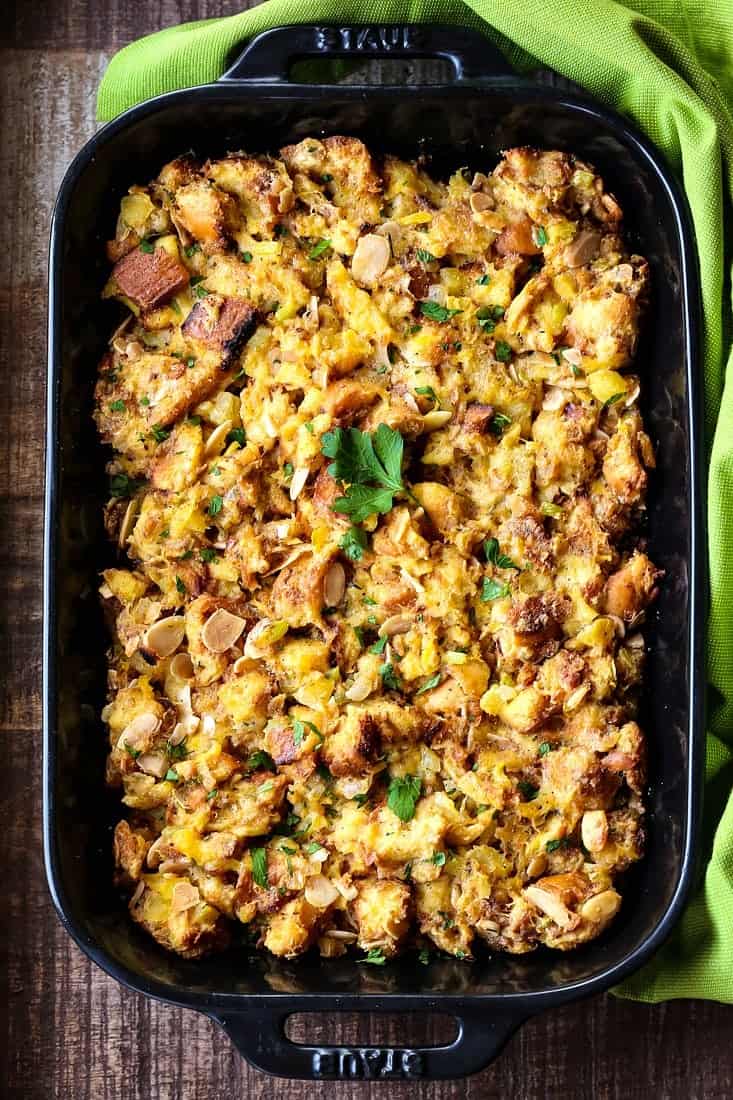 Now add the stuffing mixture into a 9″ x 13″ baking dish and dot the top with butter. Cover with aluminum foil and bake for 30 minutes.

After 30 minutes of baking, remove the foil, turn the oven up to 400 degrees and bake an additional 20 minutes. The top of the stuffing will get brown and crispy and the inside will be soft and creamy. 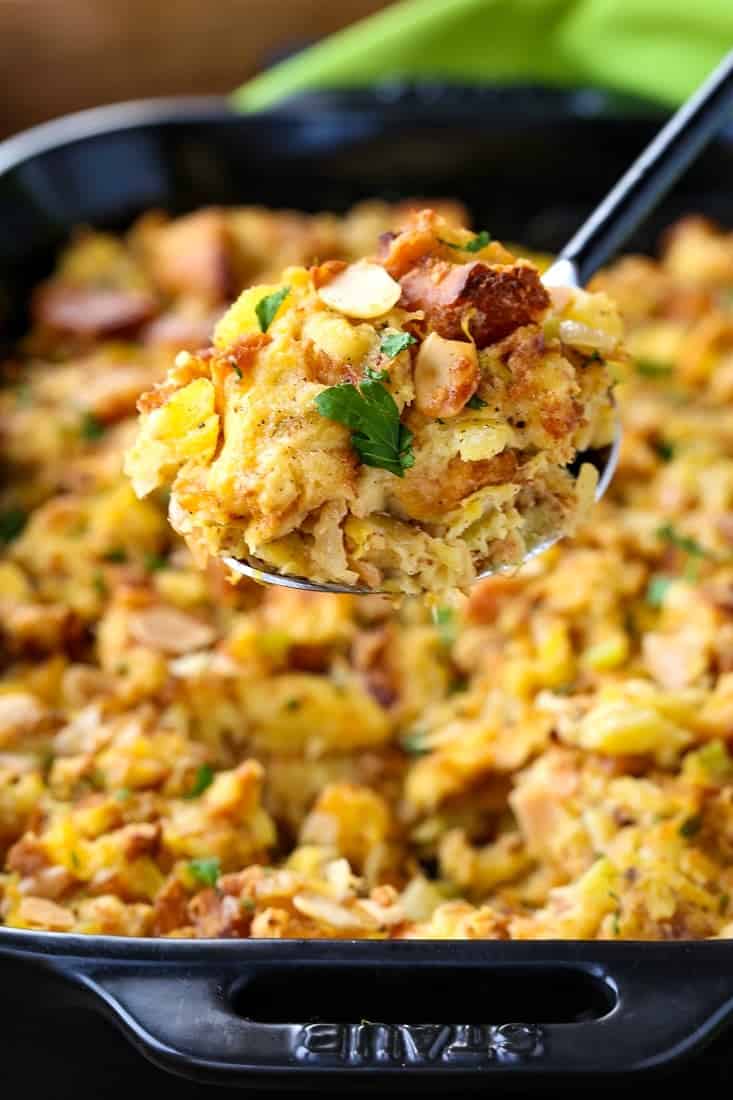 Serve this stuffing with your holiday ham or turkey or roast, or with your favorite Sunday dinner! There’s so many side dishes that go really well with stuffing, here are some of our favorites! 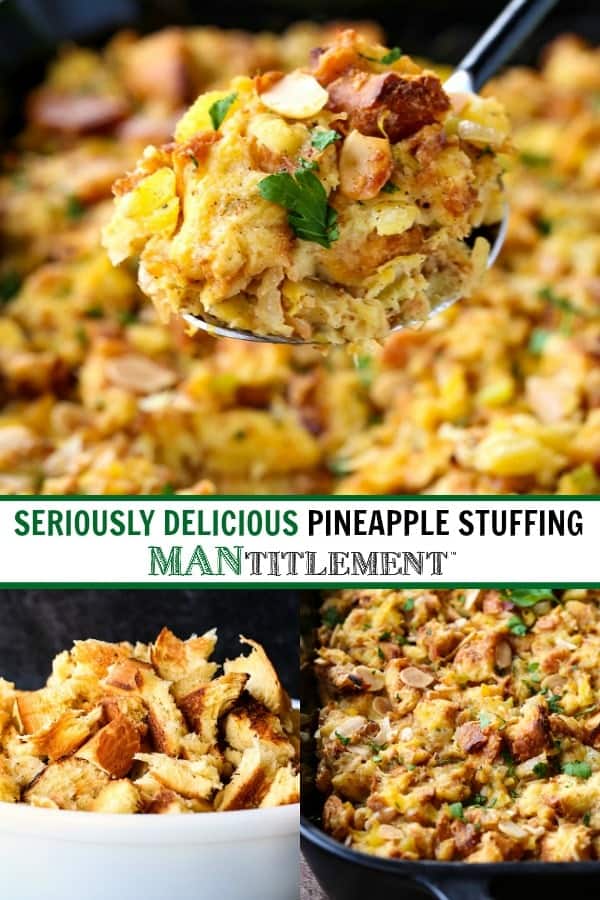 14 cups toasted brioche bread cubes (I bought 2 loaves of brioche that were 17.6 ounces each))

2 cups half and half

Melt the butter in a large skillet, then add the onion, celery, salt, pepper and thyme. Cook for 10 minutes until the vegetables are soft. Remove the skillet from the heat and let cool.

In a large bowl, beat the eggs with the half and half, reserved pineapple juice, brown sugar, vanilla extract, cinnamon, and parsley. Stir in the drained pineapple, almonds, and the cooled onions and celery from the skillet.

Add the toasted brioche to the bowl and toss gently until all the bread is combined with the egg mixture.

Transfer the stuffing to the prepared baking dish, cover with foil bake for 30 minutes.

Turn oven up to 400, remove the foil from the baking dish and bake the stuffing uncovered for another 20 minutes until inside of stuffing is cooked through and top of stuffing is brown.