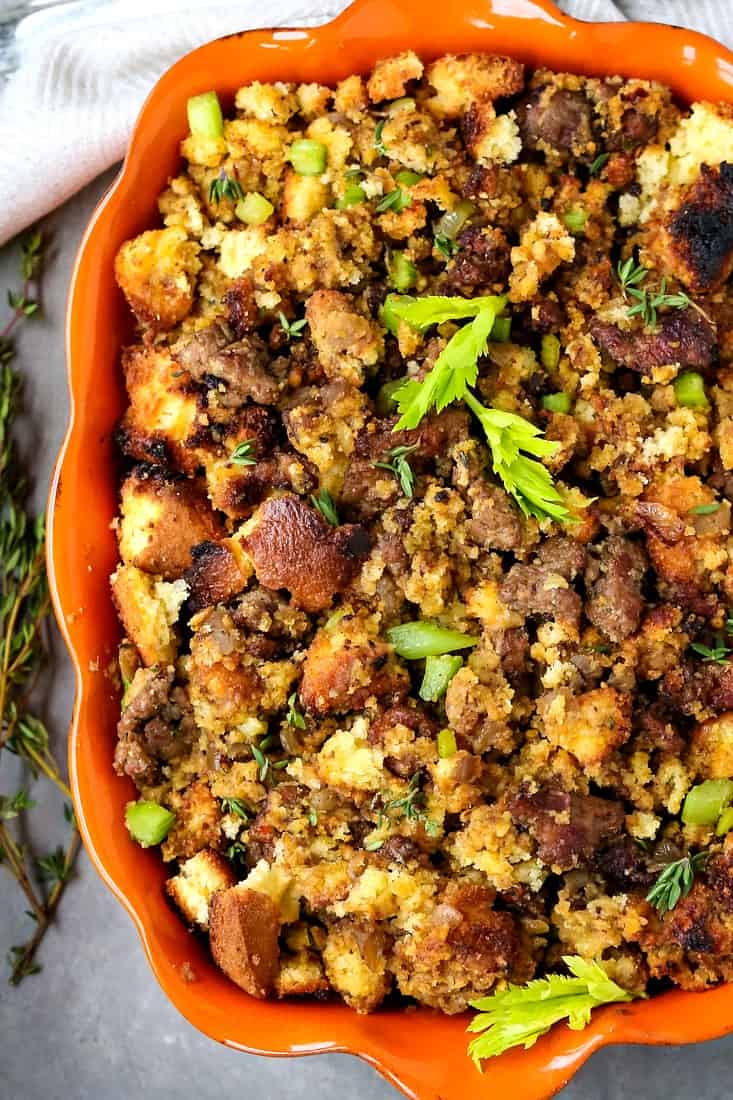 This Spicy Sausage Cornbread Dressing is one of our favorite Thanksgiving side dish recipes! This easy stuffing recipe is sure to become a family favorite!

Be sure to get the recipe for our Simple Roast Turkey that will make you look like a turkey expert! Making a ham, too? Check out our newest Baked Ham Recipe that’s just as easy!

This Spicy Sausage Cornbread Dressing is our day 2 stuffing recipe for Stuffing Week! We used our base stuffing dressing, The Best Sausage Stuffing, made a few changes and came up with this mouth watering stuffing recipe!

I do love the holidays, don’t get me wrong but I feel like two seconds ago it was summer. That’s how the seasons go in New Jersey, one second it’s warmer than you want it to be and the next second – it’s winter.

But what do we have to look forward to? THE FOOD. Comfort food, creamy casseroles and the holidays. Thanksgiving and Christmas are all about the food and drinks where we come from so let’s dive into this stuffing!

Dressing is the same thing as stuffing the only difference is that dressing cooked in a baking dish or a casserole dish, not stuffed inside your turkey.

How Do You Make This Cornbread Dressing?

Glad you asked that, too because today I’m going to show you how to do it! Like I said, this Spicy Sausage Cornbread Dressing is a dressing recipe, so it’s just going in a baking dish and into the oven.

Making homemade cornbread stuffing this way also makes it an easy make ahead stuffing recipe. Come time for Thanksgiving dinner all you need to do is pop this into the oven!

We’re going to start this recipe off by swapping out the white bread in our original sausage stuffing recipe and using cornbread instead. Store bought cornbread already made is the way I go…or make your own.

Break up the cornbread into smaller pieces but still big enough so that it doesn’t all crumble together. You want some smaller and some larger pieces just like this – 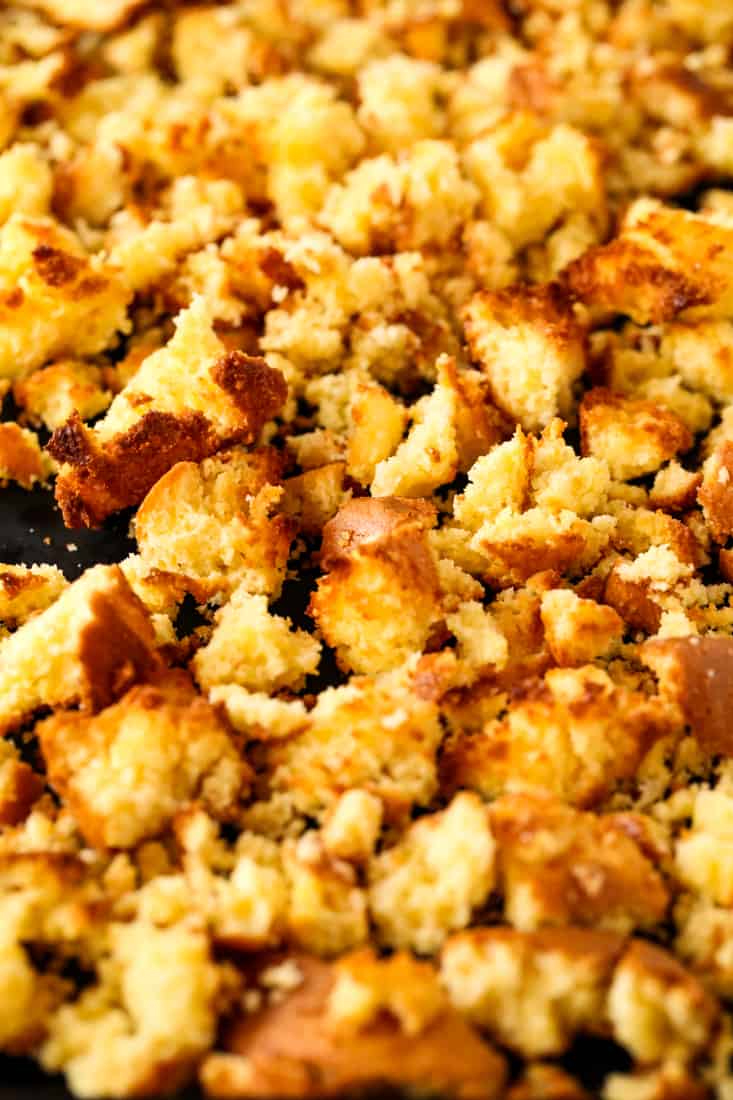 Now bake the cornbread in the oven just for a few minutes to get it nice and toasty.

There’s two reasons for doing this, one is that toasting the cornbread gives it a richer, nuttier flavor. The second reason is that it gives the cornbread some firmness and texture so it doesn’t all break apart into mush in your dressing.

Once the sausage is browned add an apple, onion, poultry seasoning and fresh thyme. Cook for about 5 minutes until the onion is softened, then pour in some chicken stock. 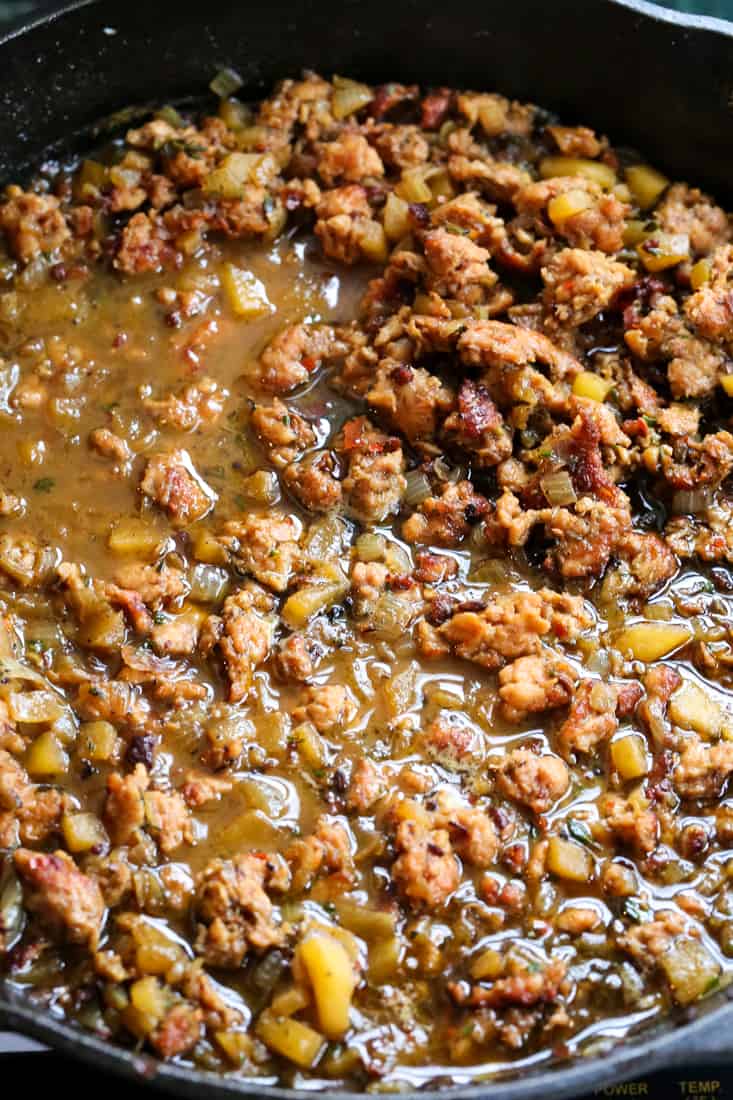 Now you’re going to let this simmer for about 10 minutes, season with salt and pepper and give it a taste. It’s really important to taste what you’re cooking guys – something I never used to do before.

Add the toasted cornbread to a very large bowl, the biggest one you have, and pour in the cooled chicken broth mixture.

Next stir in a couple of beaten eggs and parsley, stir again carefully so you don’t break up all the cornbread and pour into a 9″ x 13″ buttered baking dish. 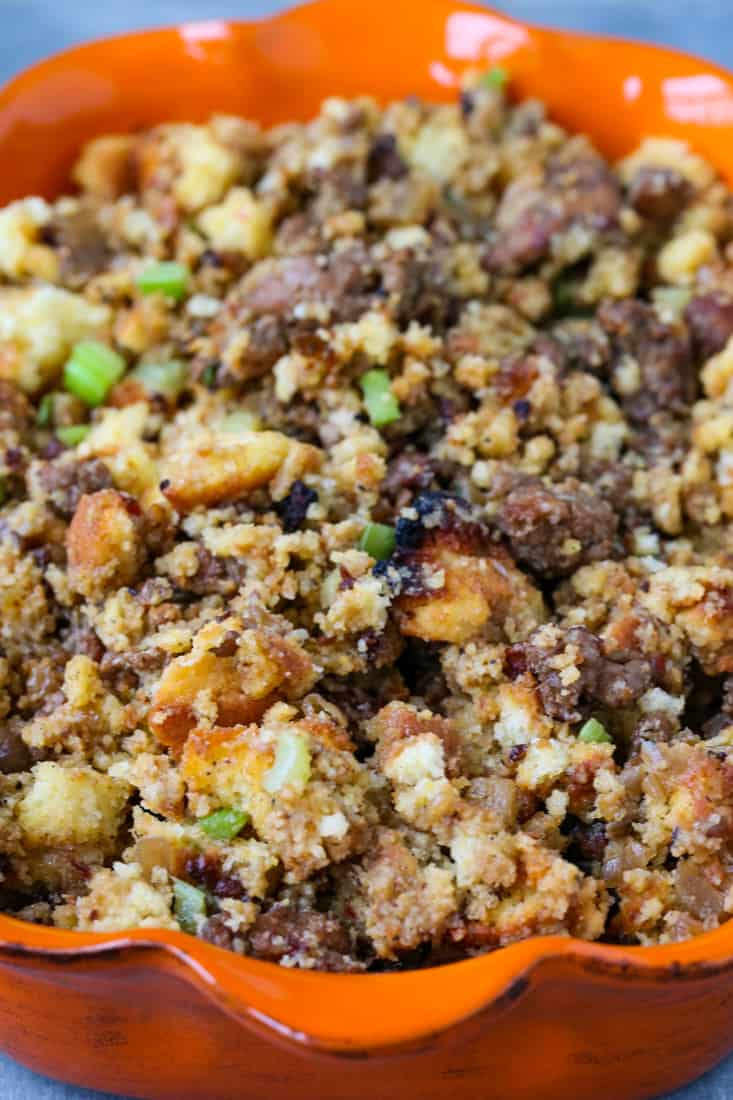 Can You Make This Stuffing Ahead Of Time?

Yes! This is a perfect make ahead recipe for the holidays, which makes life a whole lot easier. Getting as much food prepped ahead of time is the best way to do it.

Just follow the instructions for this recipe and let it cool, then cover with foil and store in the refrigerator. Take the stuffing out of the refrigerator about 30 minutes before you need to bake it, just to take the chill off.

Sometimes I think recipes like this taste even better when you make them ahead of time so the flavors all come together. 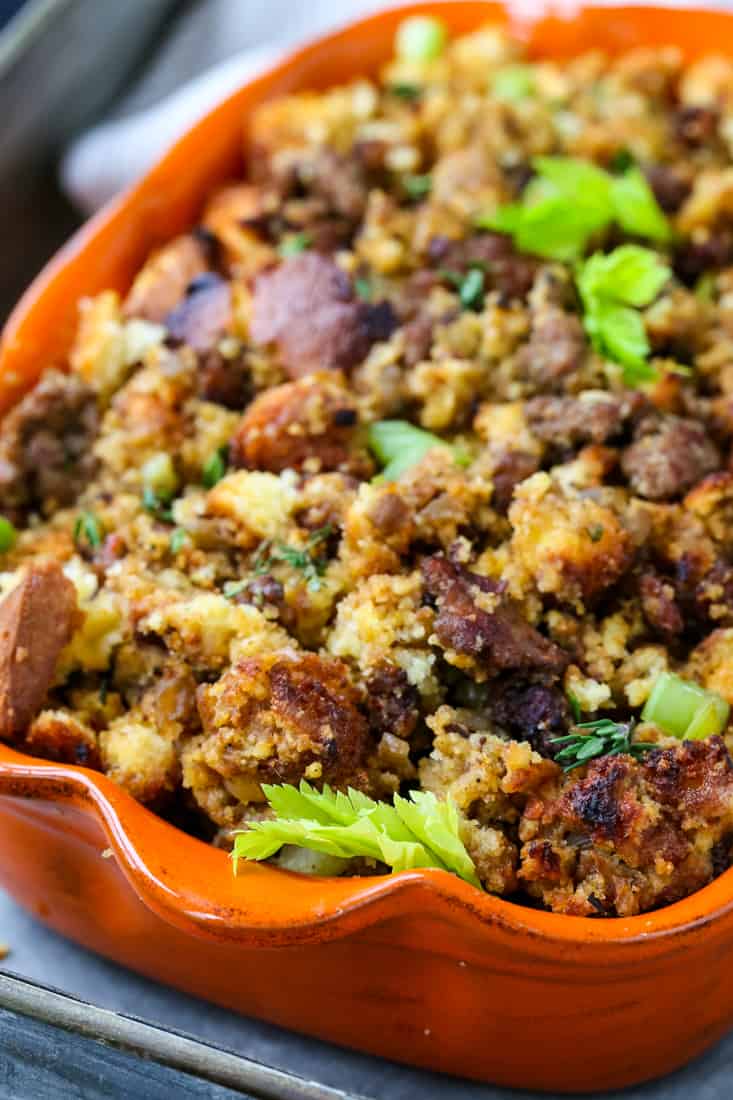 Look at all that crispy cornbread and sausage going on in there. I’m telling you, this Spicy Sausage Cornbread Dressing is the perfect combination of sweet and spicy. But not too spicy, it’s very kid friendly, no worries there.

Here’s a few swap out ideas for this recipe:

• Switch the spicy sausage for regular sausage or turkey sausage

• Add mushrooms for another vegetable addition

• Switch the apples for pears or leave the fruit out completely 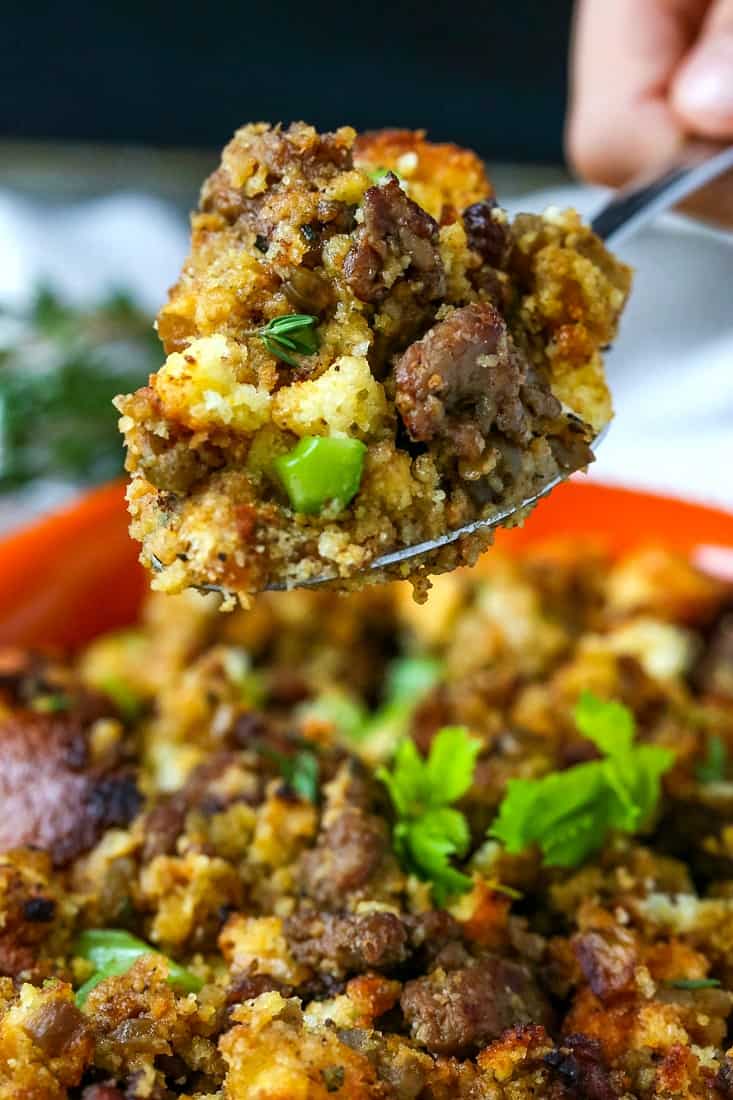 Looking for more stuffing recipes? Head over to our BEST Stuffing Recipe Collection for all your stuffing needs!

This easy cornbread dressing recipe is packed with spicy sausage and sweet cornbread! A great make ahead stuffing recipe especially for Thanksgiving!

2 pounds cornbread (either from muffins or a loaf)

Preheat the oven to 350 degrees.

Add the butter to a large skillet over medium heat. Once the butter is melted, add the sausage to brown, breaking up with a spoon.

Once the sausage is browned, add the onion, celery and apple.

Cook for 5 minutes until the onion has softened.

Add the poultry seasoning, thyme, salt and pepper then the chicken broth.

Bring the broth to a simmer and cook for 15 minutes.

While the broth is simmering you can toast the cornbread. (You can also do this ahead of time)

Place the cornbread in a large bowl then pour the chicken broth and sausage mixture on top. Stir gently to combine then add the beaten eggs and stir.

Pour into a buttered 9″ x 13″ casserole dish and dab some extra butter on top.

Add an additional 5-10 minutes to the covered cooking time if the dressing is cold from the refrigerator.