Male this Brown Butter Glazed Ham for your holiday dinner! This baked ham is coated with the most unbelievable brown sugar and butter glaze! 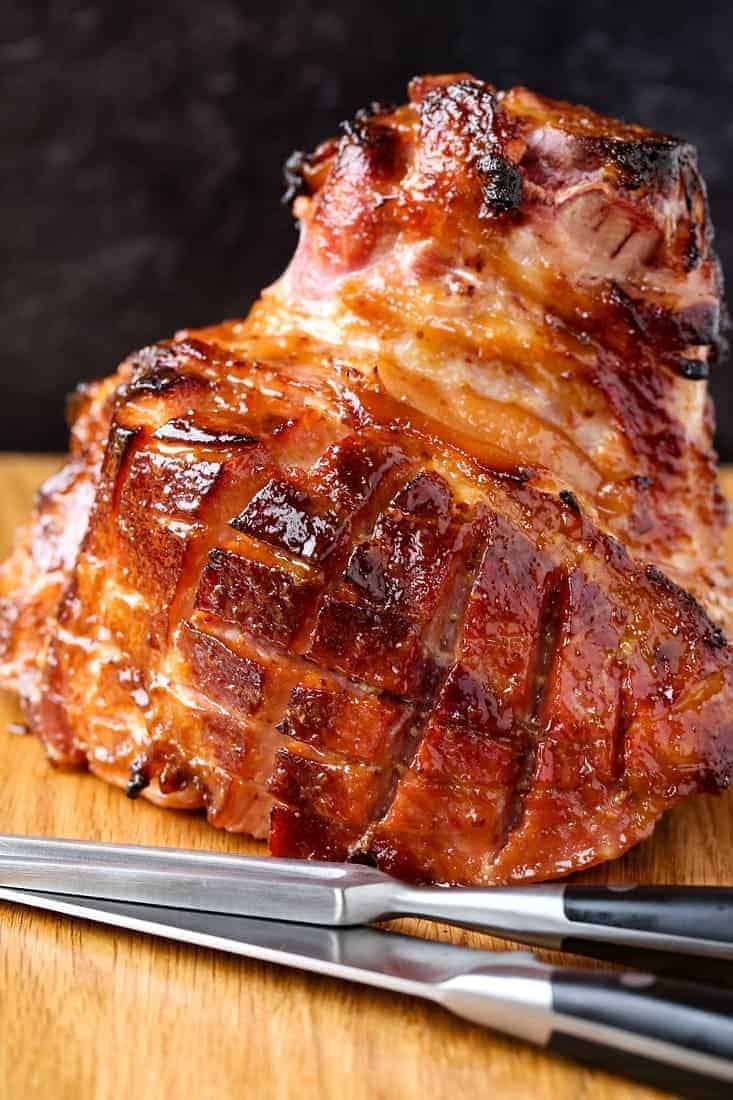 Just take a look at that ham and tell me it doesn’t look like a picture perfect holiday dinner! A lot of people serve baked ham for Christmas dinner, but if your family is anything like mine one turkey for Thanksgiving just isn’t enough.

Not that the quantity isn’t enough…but we like to have options. Normally we serve a roasted turkey and a baked ham recipe for Thanksgiving dinner.

This Brown Butter Glazed Ham is so darn delicious and easy to make, you won’t want to save it just for your holiday meals. Sunday dinners, meal prepping for the week…it’s on our go to dinner list.

What Kind Of Ham Should I Use To Make A Baked Ham?

We like using a bone-in ham because I think it tends to be juicier, plus the presentation is on point. But you can also use a boneless ham for this recipe, it’s really what you prefer.

You’ll definitely want to ditch that glaze packet that comes with the package and use this brown sugar and butter glaze recipe instead! 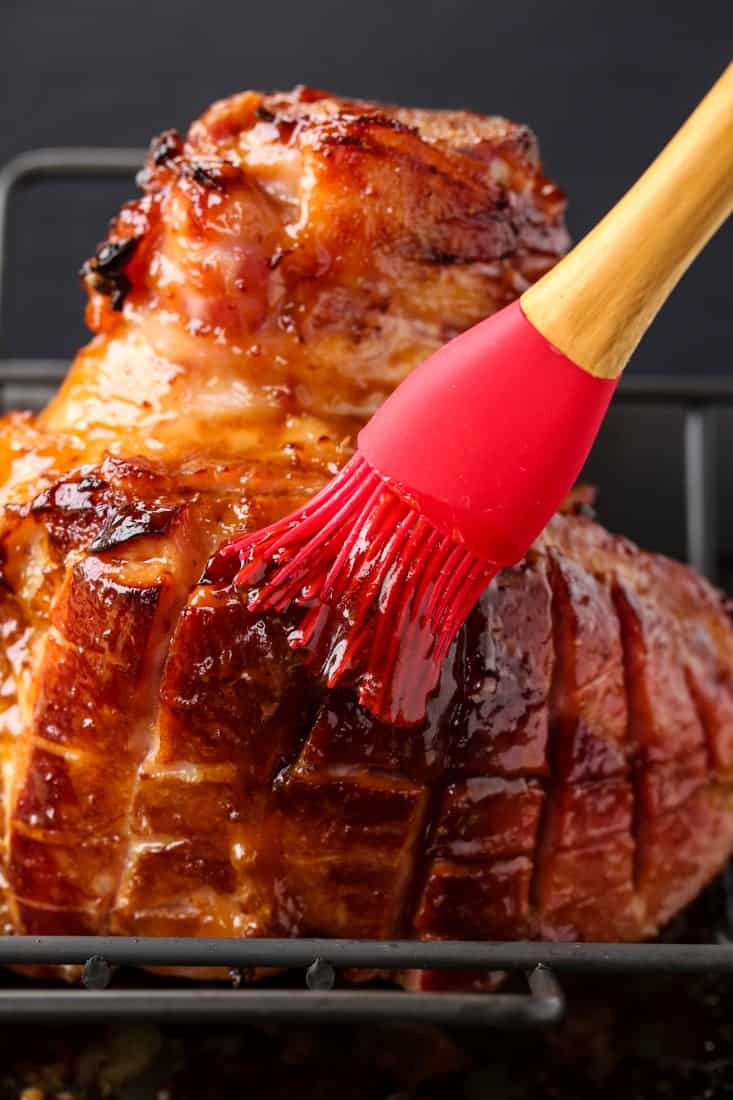 How to Bake a Ham

Baked hams are one of those dinners that just look so impressive when you put it on the table, people don’t realize how easy they are to make!

All you need to do is remove the tough skin (or rind)  from your ham and score it. Removing the skin is really easy once you do it, just run your knife along the bottom edge of the skin and run your fingers between the skin and the fat of the ham. It comes off pretty easily.

Scoring the ham is simply making a diamond pattern along the fat of the ham, how big or how small the scoring pattern is is up to you. What scoring the ham does is create crispy edges for the glaze to stick onto and caramelize. Literally my most favorite part of the ham, especially when the glaze is as tasty as this one is. 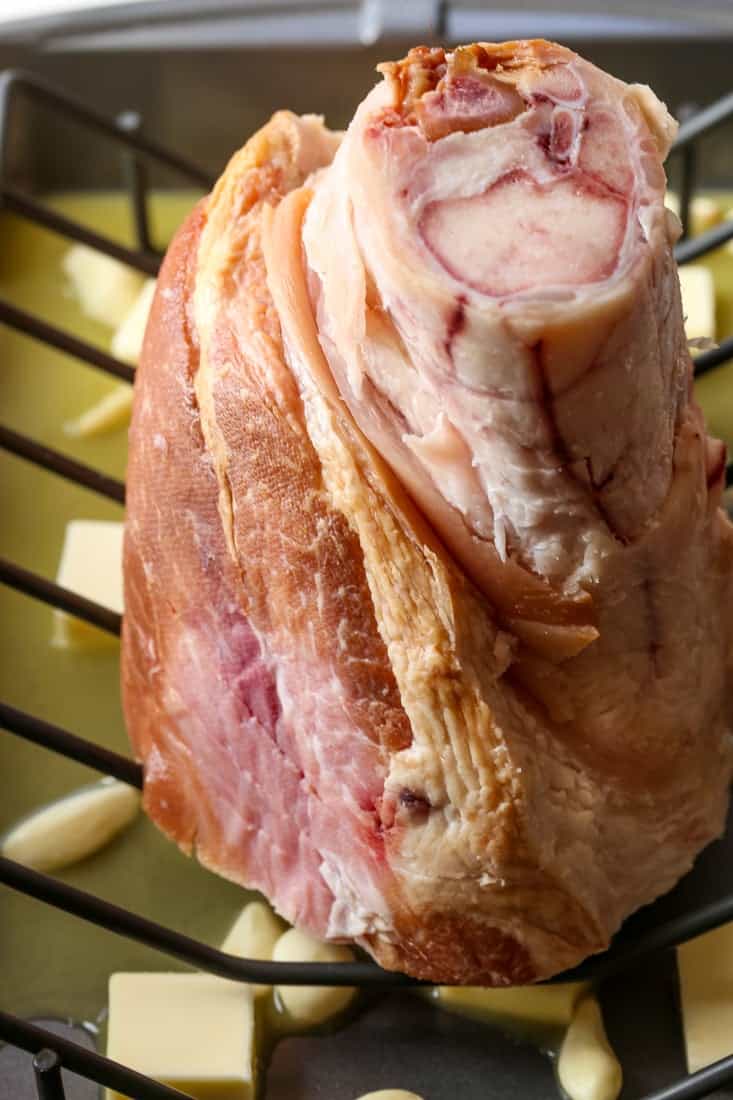 The bottom of the baking pan is where the magic happens, for this ham recipe we added a good amount of butter to the bottom of the pan, chicken broth, garlic and a bay leaf. As the ham cooks, the juices will run down and add to the butter mixture which will eventually create the glaze.

The ham is going to cook almost until the end without any glaze at all, the glaze comes in during the last 30 minutes of cooking otherwise the glaze would burn.

Burnt glaze is no good. Caramelized glaze is the bomb. There’s a fine line but a big difference, which is why the glaze goes on towards the end.

How Do You Slice Ham On The Bone?

Once the ham is done, let it rest for 15 minutes tented with foil before slicing. Then turn the ham on its side and start slicing the ham to your desired thickness until you reach the bone in the center. You can keep slicing the ham this way and then turn it over to the other side and slice the rest.

Alternately you can stand the ham upright and carve down the bone into 3-4 thick pieces and then cut the pieces that you cut off the bone into thinner slices. Either way works, it’s all what you feel the most comfortable doing.

Some people use a ham stand for easier slicing but I don’t really feel like they are necessary, a sharp knife and a cutting board will work just fine! 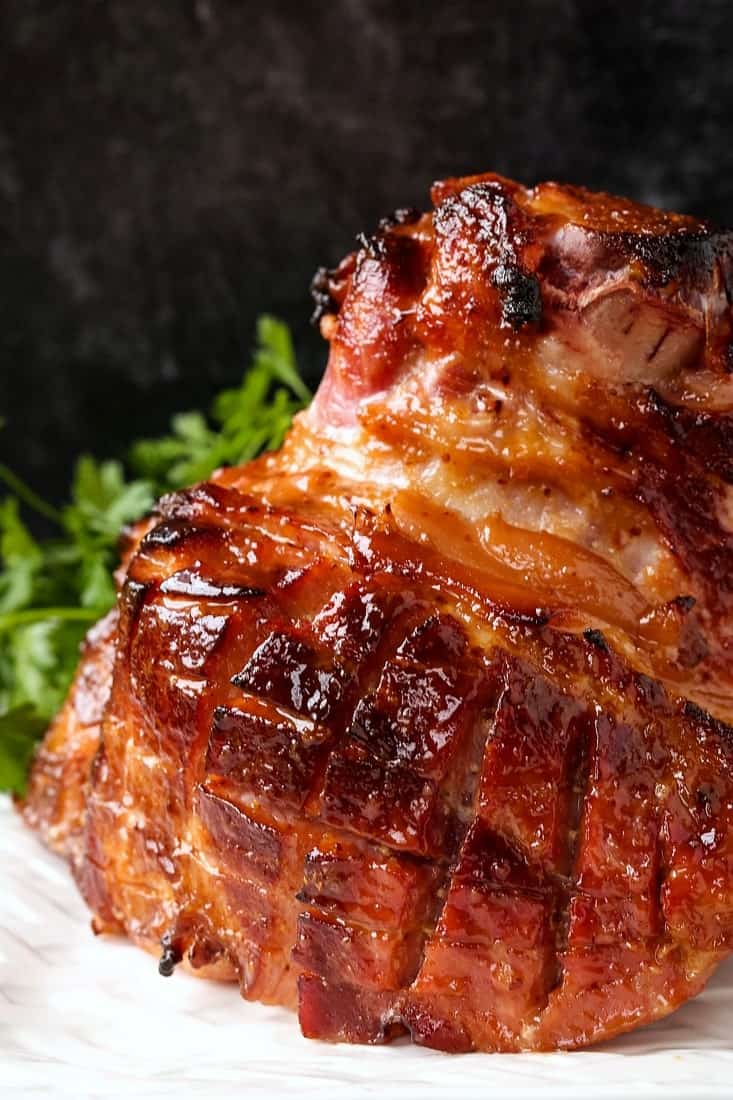 One thing we know is that this Brown Butter Glazed Ham is going to be on your permanent holiday menu! Recipes like a baked ham look so beautiful when serving, they always please a crowd. Then there’s the flavor or this buttery, brown sugar glaze that can’t be beat, it’s a holiday dinner win. 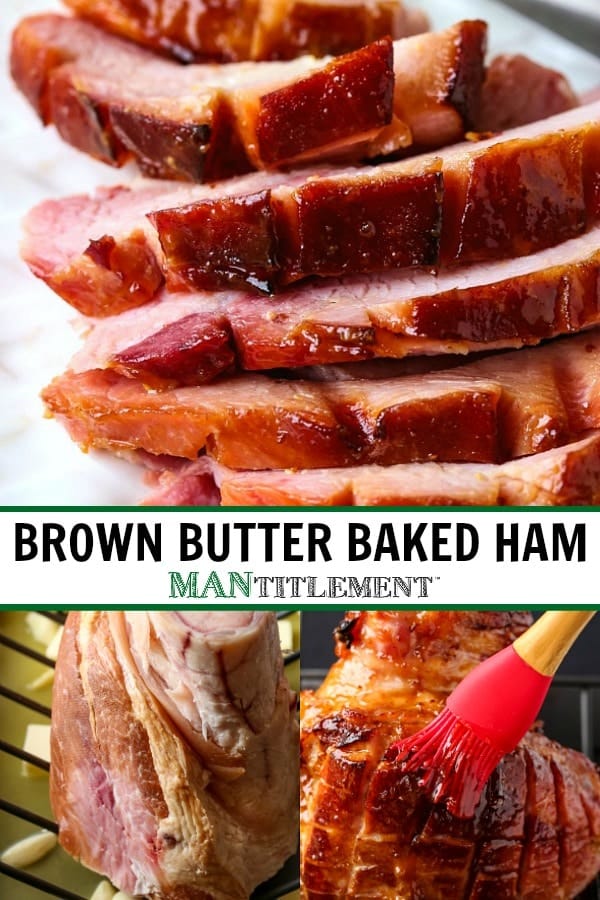 What Side Dishes Go Best With Ham?

We’ve got side dishes by the dozens here to share with you! Just head to our “Side Dish” menu and start browsing. We’ve got low carb recipes, casserole recipes, roasted vegetable recipes…take your pick!

Try our Brown Butter Glazed Ham for your holiday dinner! This easy baked ham recipe is covered with the most unbelievable brown sugar and butter glaze!

The cooking time in this recipe is for a 10 pound ham, adjust the cooking time higher or lower depending on the size ham you have. The usual cooking time is about 20 minutes per pound, until a thermometer registers 160 degrees.