Make this Skillet Chicken Pot Pie with Cornbread Topping for an easy one skillet dinner. Use leftover chicken or turkey to make this dinner a breeze! 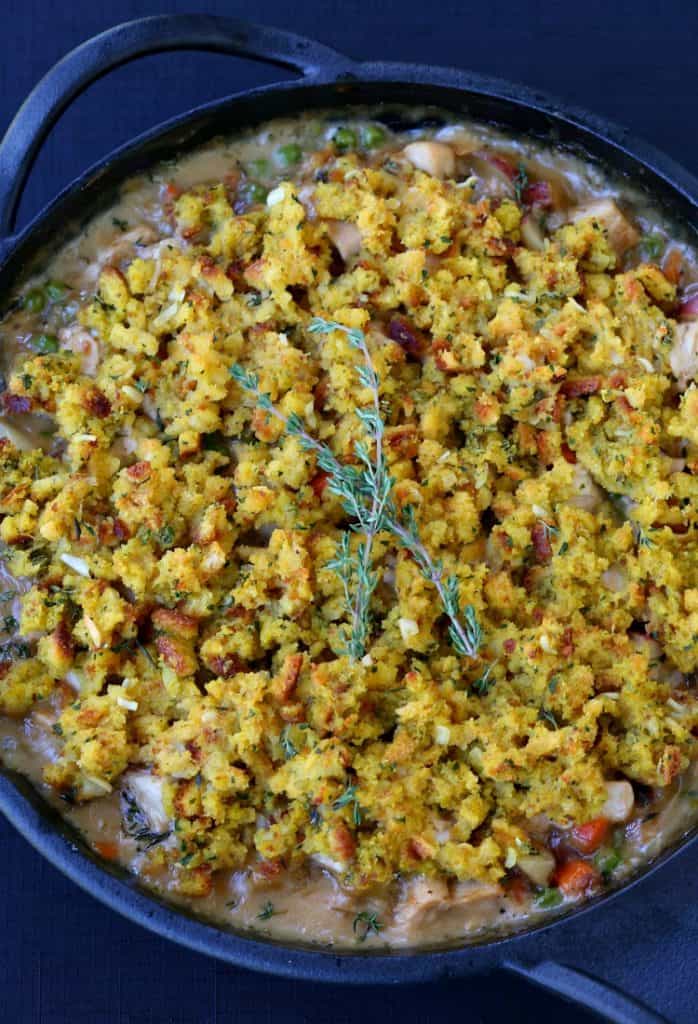 Chicken Pot Pie is up there with one of my favorite dinners. Loads of chicken and potatoes – I guess you can throw some vegetables in there too – in that creamy, thick sauce…you really can’t beat it.

I have to admit when we make chicken pot pie we always use a store bought crust. Back in the day Christie used to make it using this chicken pot pie recipe from scratch and it was really, really good.

But no one has time for that these days and honestly, the store bought pie crusts are pretty good.

But for this Skillet Chicken Pot Pie with Cornbread Topping, just like the name says, we used a cornbread topping. It’s actually cornbread stuffing – right from the box.

Now if you’re making you’re own stuffing, like we do all the time, you might have some extra Sausage Stuffing in your refrigerator that you can use too. 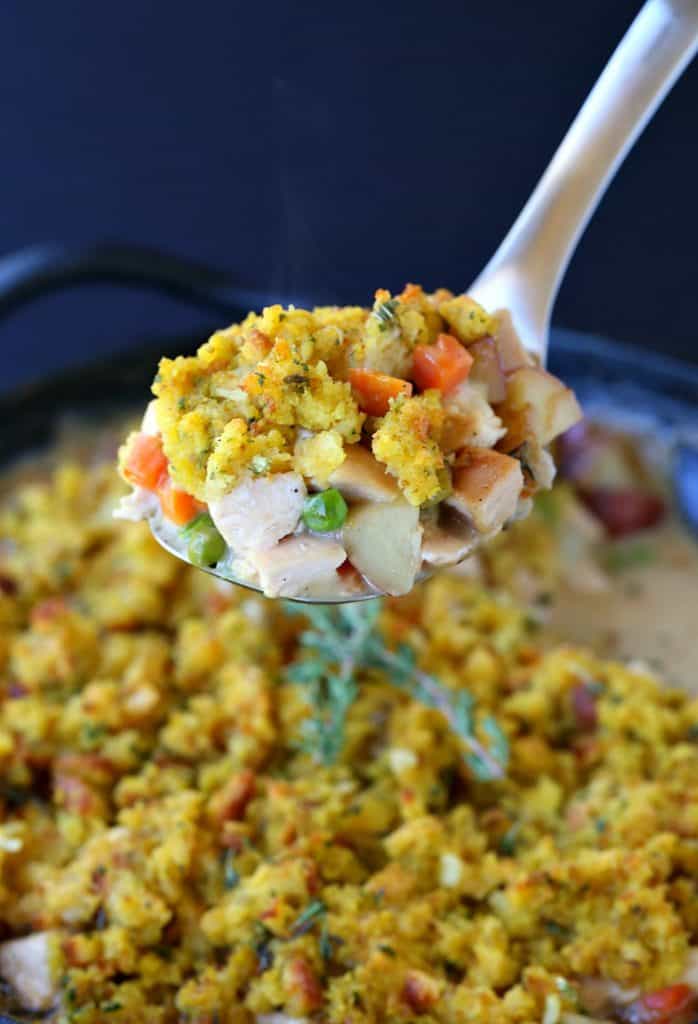 Yes. I said right from the box.

Of course if you have a cornbread stuffing recipe that you make all the time and love, you should definitely use that. But using the box and basically stirring it together with hot water and it’s done…it doesn’t get easier that that.

And after you spread the stuffing onto this crazy good chicken pot pie filling and bake it until it’s crispy on top, you’re never going to remember that it was from a box.

It’s going to be that good.

Start out by roasting seasoned chicken breasts in the oven at 400 degrees. You can grab a rotisserie chicken from the store if you want to skip this step, that will work too.

OR if you have leftover turkey or leftover chicken from dinner you made the other night, this is a great leftover recipe.

Once the chicken is cooked, cut it into cubes and set it aside while you start the filling.

So don’t leave it out. 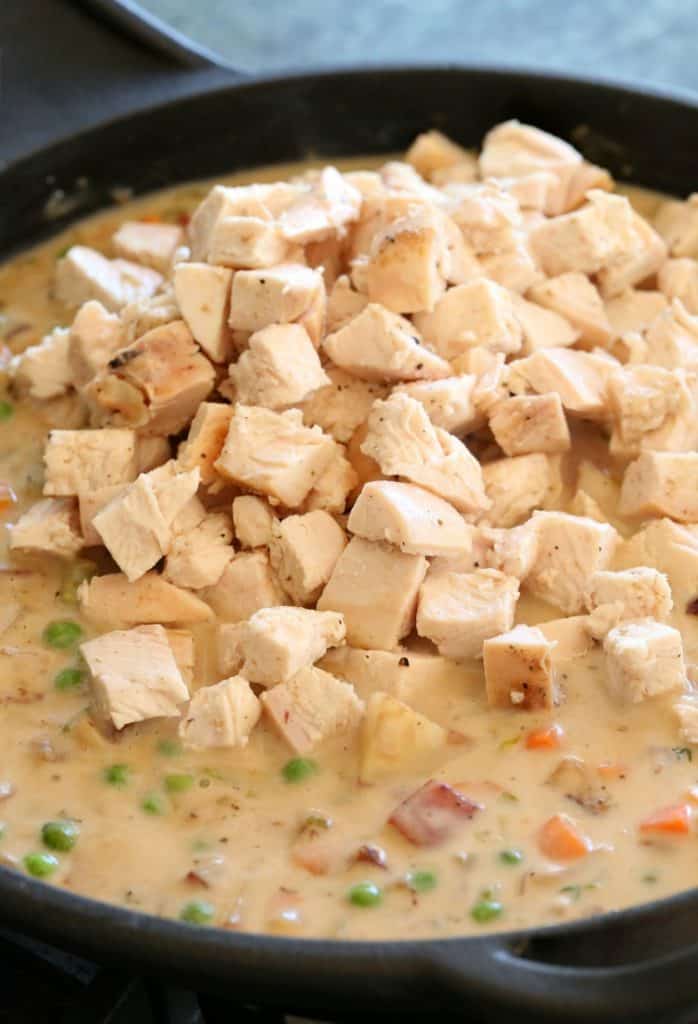 Then while the filling is cooking you can whip up that boxed cornbread stuffing mix. I know you guys all know which box I”m talking about…boiling water, stir and done.

So do that, then spread the stuffing on top of the chicken pot pie filling and get it in the oven. 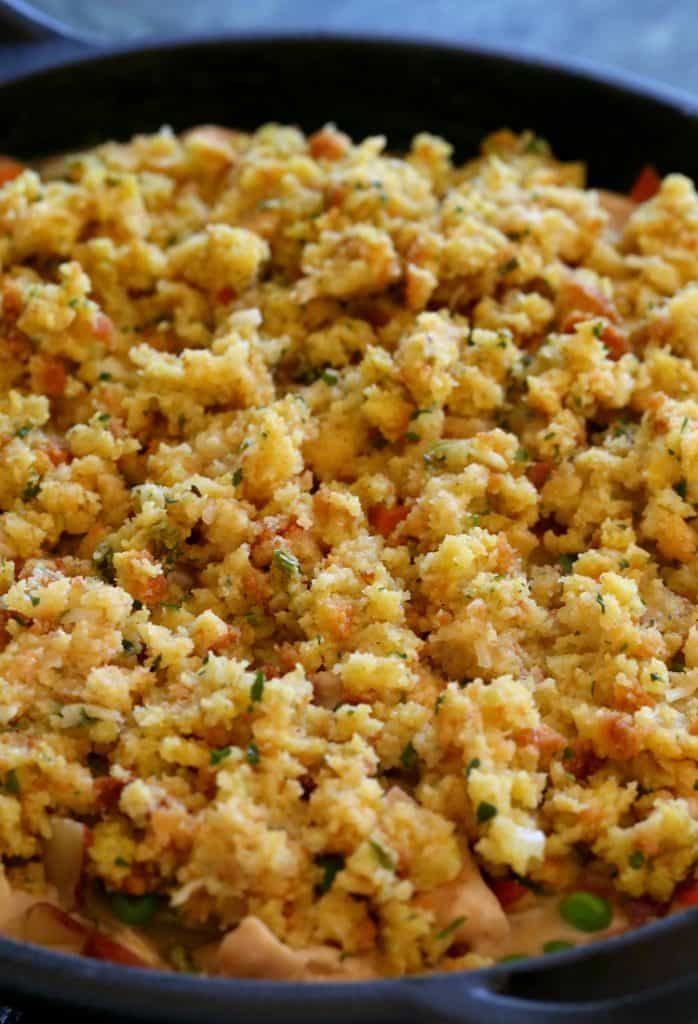 Bake for 15 minutes until the topping is browned and it’s ready to serve!

I mean there’s no one alive who’s going to turn this Skillet Chicken Pot Pie with Cornbread Topping down. 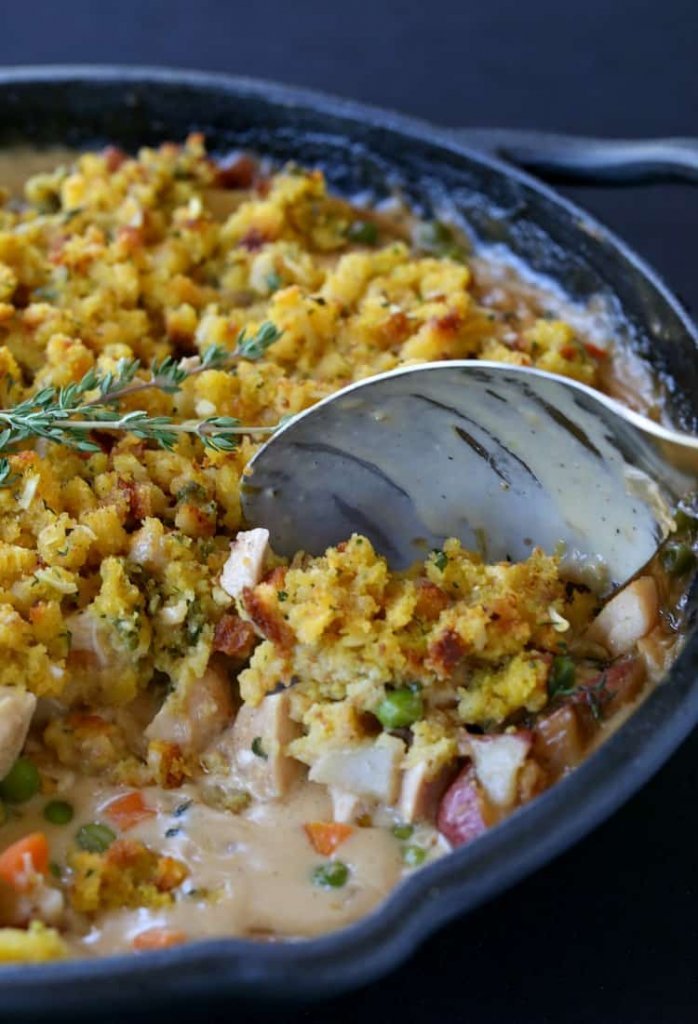 Grab a spoon and dig in!

Now I’m going to say this recipe serves 6. Because for normal people it will. But I gotta tell you – there wasn’t much leftover after my boys and I got into it. We did leave a little for Christie, too, but honestly… 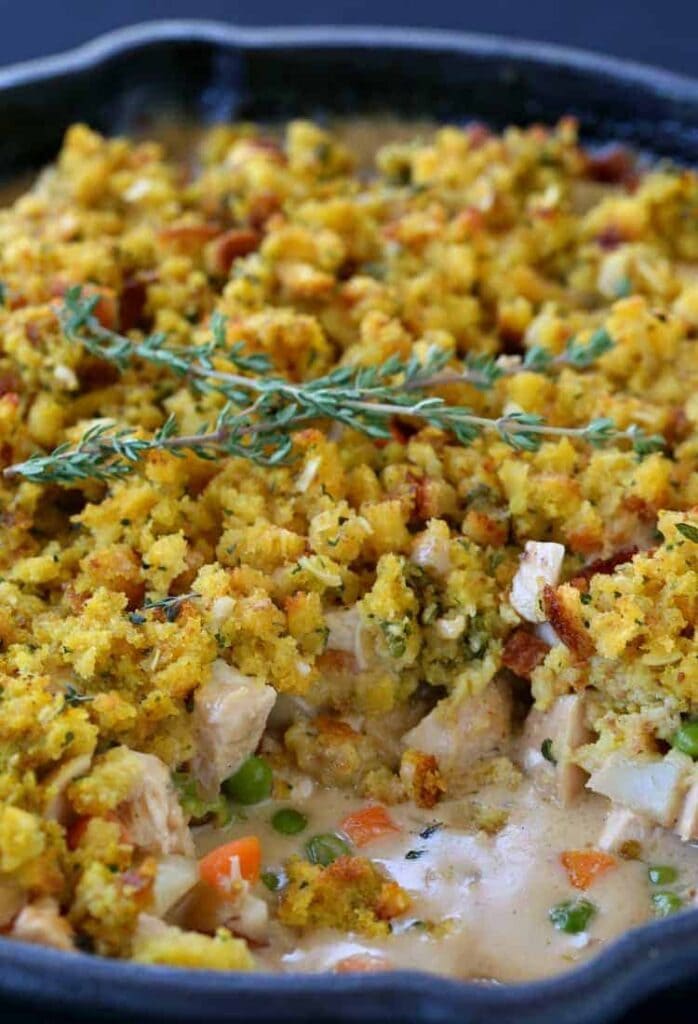 This delicious one skillet dinner uses store bought stuffing as a short cut! You can also use your leftover chicken or turkey to get this dinner on the table fast!