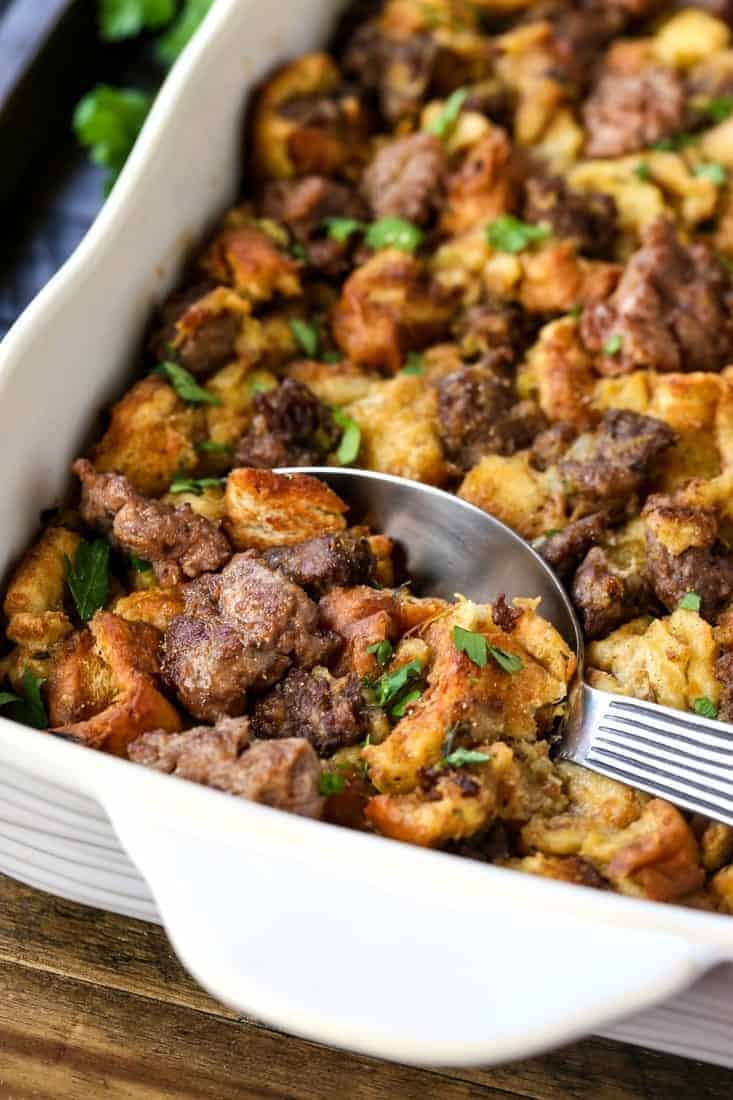 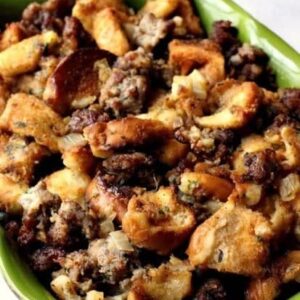 Many recipes claim to be “The Best”, but this really is The Best Sausage Stuffing! We make it as a Thanksgiving side dish and also during the regular year – this stuffing is so good we have to get our fix!

Wondering what to serve with stuffing? This recipe goes great with Roasted Turkey or Glazed Baked Ham. Just add another side dish or two and you’ll have a meal fit for a king! 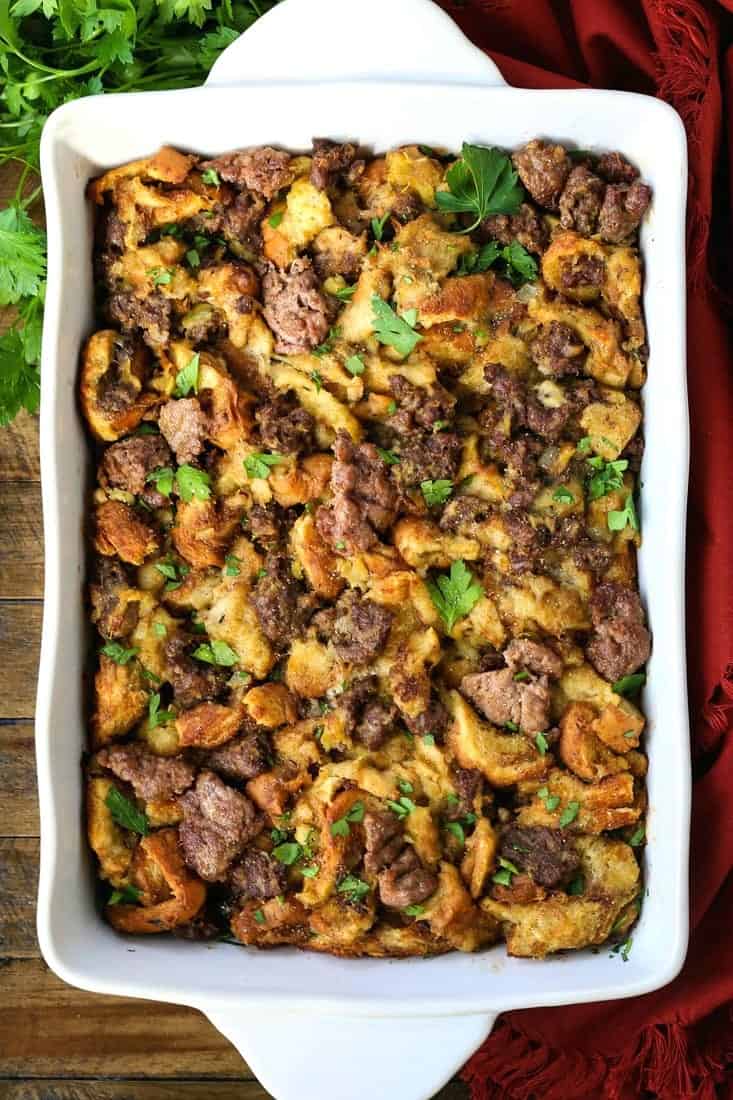 I’ve actually run into friends of mine at the grocery store with an oven stuffer chicken in one hand and two loaves of white bread in the other hand. They laugh knowing that I’m going home and hoping the wife will throw together a roast chicken dinner with some of my favorite sausage stuffing that I’m craving.

Luckily for me she usually does.

But things have changed and I want to learn how to make this recipe myself. And with Thanksgiving around the corner I thought you guys could all use a go-to recipe for the best sausage stuffing.

Seems like most people have a favorite stuffing recipe…but this might just become your family favorite too.

What I really should have called this is the best sausage and apple stuffing recipe. Because for me, it’s the apples that give it that addicting flavor. Which is another funny food story for me because when Christie first made this stuffing years ago I couldn’t believe she was chopping up an apple… 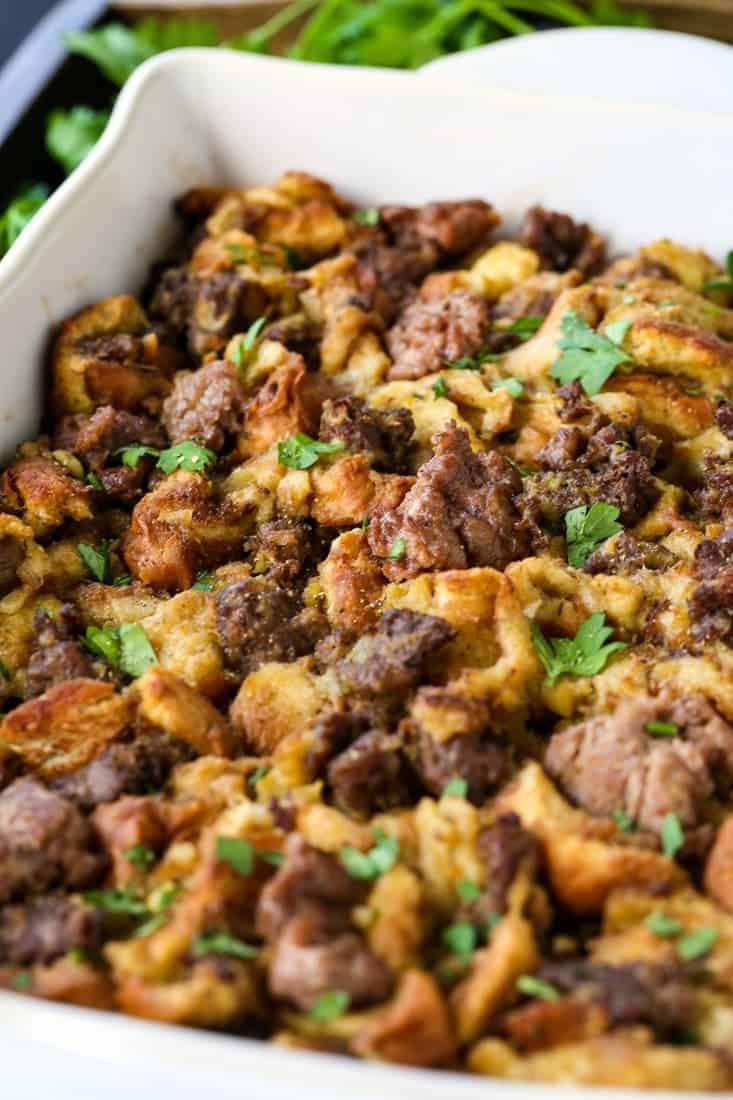 I even asked her not to put that into the stuffing recipe, please. Sometimes you just need a sausage stuffing fix and I didn’t want any apples messing it up. Little did I know that it was going to be the best flavor addition to this stuffing recipe ever!

Now I find myself adding even more apples to this recipe, and more sausage if I have it. Because my sausage stuffing recipe needs to be loaded with sausage – and now apples of course, too.

What is the Best Sausage to Use for Stuffing?

In my opinion you want to go with Italian sausage, mild or spicy. Or you can use a combination of both but it’s the flavors and spices in Italian Sausage that really work for this stuffing recipe.

You can use a pork sausage or a breakfast sausage, that will work too but I think the flavors and spices in Italian sausage really bring the best flavor.

Now I know you guys want to get into it so let’s get ready to make The Best Sausage Stuffing ever!

How to Make Homemade Sausage Stuffing

Start by browning the sausage and draining any drippings from the pan if needed. Next add onions and chopped apples, letting them cook down a bit, then pour in some good quality chicken broth. 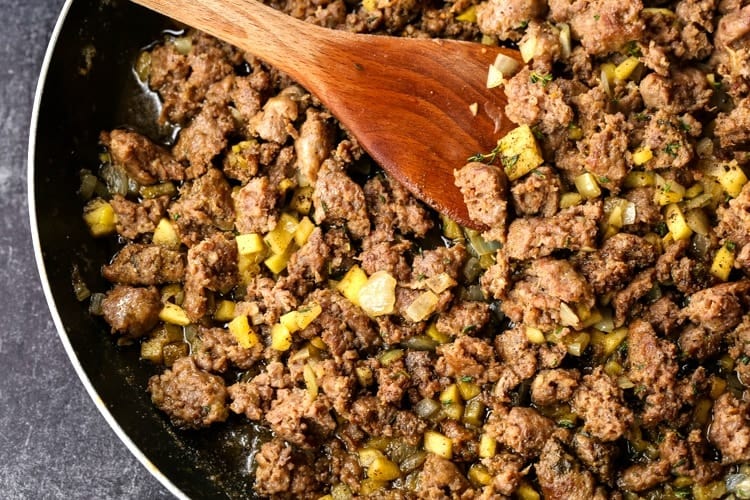 While that is simmering start toasting a whole loaf of bread. (Or you can toast the bread ahead of time, too. Doesn’t matter if it’s cold) Use regular white bread for this, not sourdough or whole wheat or ciabatta.

Just white bread please, there is a time and a place for white bread and this is it. I’m not saying that you can’t try different types of bread for stuffing. In fact, there are many AMAZING recipes that call for different bread

But for my recipe – my favorite stuffing recipe ever – just stick with good old fashioned white bread. All of these ingredients added together is what makes The Best Sausage Stuffing taste the best…trust me on this one. 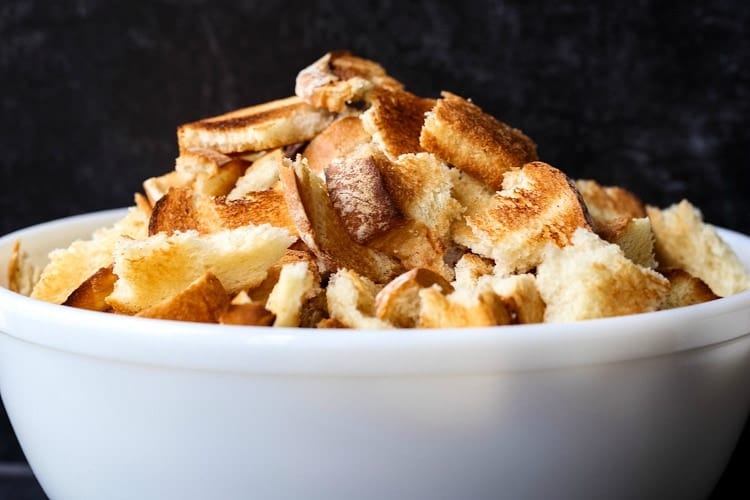 Tear or cut the bread into cubes and add them to the biggest bowl you can find. Now you can pour the sausage and broth mixture over the bread cubes and stir together gently until all the bread is moistened with the broth.

At this point you should taste a piece of bread to make sure that it’s seasoned properly, adding more salt or pepper if needed. Now pour in the eggs and parsley and gently toss one more time. You don’t want the bread to turn into mush, some of it will and that’s ok but try to keep some pieces in tact.

Pour into a heavily buttered dish, top with more cubes of butter and bake. 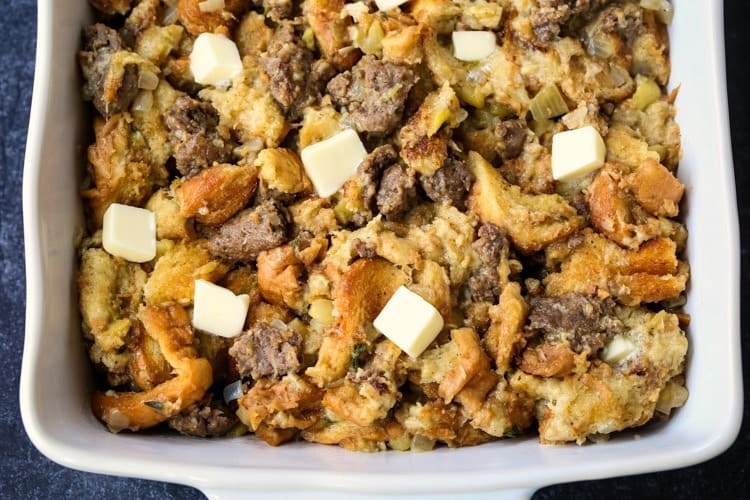 Can You Make Sausage Stuffing Ahead Of Time?

Yes, you can make this stuffing ahead of time and keep it in your fridge until you’re ready to cook it. You can also freeze it and take it out to thaw before cooking – that’ll be a huge timesaver for those big Thanksgiving dinners!

Since we make this stuffing all the time, I’ve actually have found that it tastes better if you make it the day before. Let it sit in the fridge until you’re ready to get it in the oven. That perfect white bread soaks up all the flavor from the broth and sausage and it really makes the flavor better.

And leftover stuffing (if there is any) usually becomes a main meal for me. Pour on leftover gravy if you have it, but just as is works totally fine. 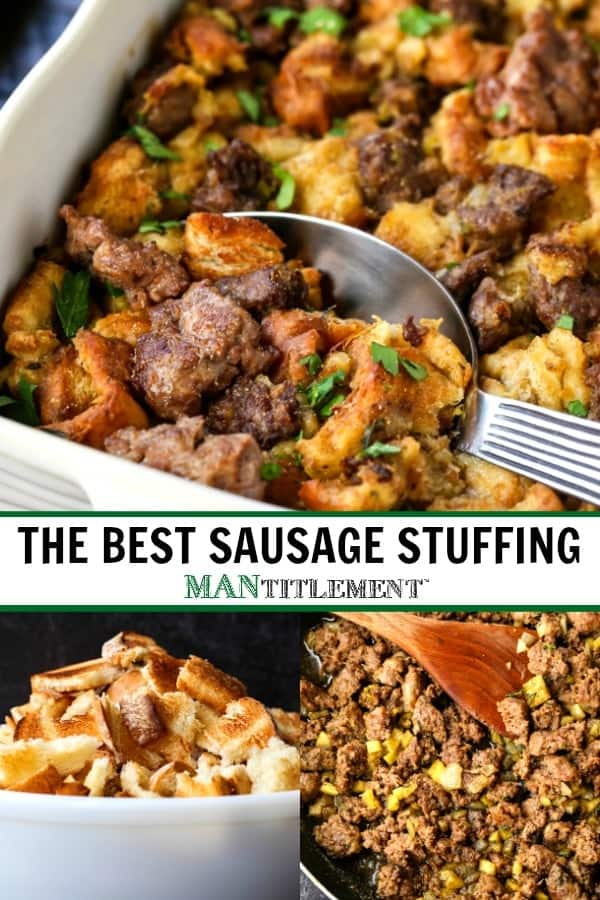 There are a lot of recipes that claim to be “The Best”, but this really is The Best Sausage Stuffing recipe! We make it as a Thanksgiving side dish and also during the regular year – it’s so good we just have to get our fix!

If you prefer to not have a crispy stuffing then leave the foil on for the entire cooking time. You can make this stuffing recipe ahead of time, cover and keep in the refrigerator until ready to bake. Bring the dish out about 30 minutes before cooking to let it come to room temperature first.

You’ll need to buy 2 regular loaves of white bread (you’ll use about 1 1/2 loaves for 16 cups) or you can buy and extra large 24 ounce loaf.