We love serving this lentil soup with crusty bread or a buttery Garlic Bread! A light tossed salad like this Escarole Bistro Salad will finish off the meal! 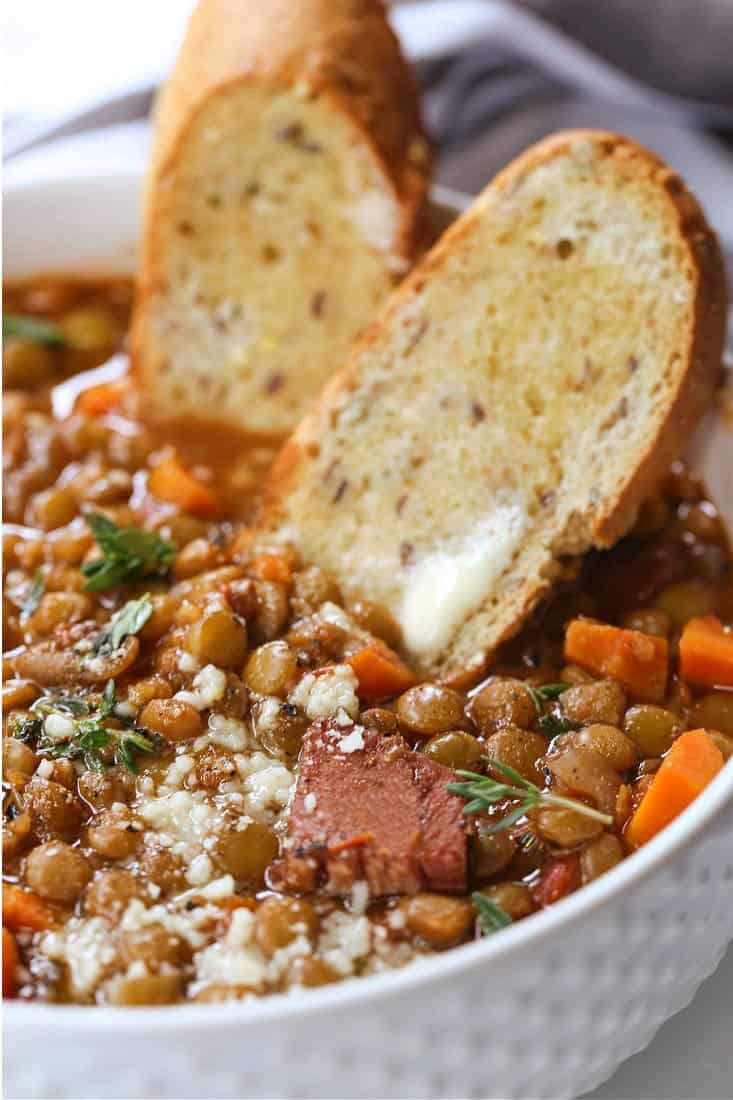 Of course we make this lentil soup with ham with our leftover ham from Thanksgiving or Christmas, but we love it so much we find ourselves grabbing ham at the deli counter just so we can make a batch.

Lentils are hearty and filling, and also very nutritious so this soup recipe is a home run in many ways! Our boys love grabbing crusty pieces of bread slathered with butter for eating this soup.

Lentil soup freezes beautifully, too! Lentils retain their shape and texture really well after a few days in the refrigerator and even after freezing. So this leftover ham recipe will not only make you a couple of dinners, but create even more leftovers that you can freeze for another easy dinner!

How To Make Lentil Soup with Ham

Start by cooking down your aromatics. Carrots, onion and celery for this lentil soup recipe, followed by a good amount of chopped garlic. Once the vegetables have softened, pour in your favorite, dry red wine to deglaze the pot.

If you’re not a red wine drinker, you still can grab a decent, inexpensive bottle to cook with – as long as it’s not cooking wine. Use the rest to make a delicious Beef Stew or many other recipes that use red wine as an ingredient. 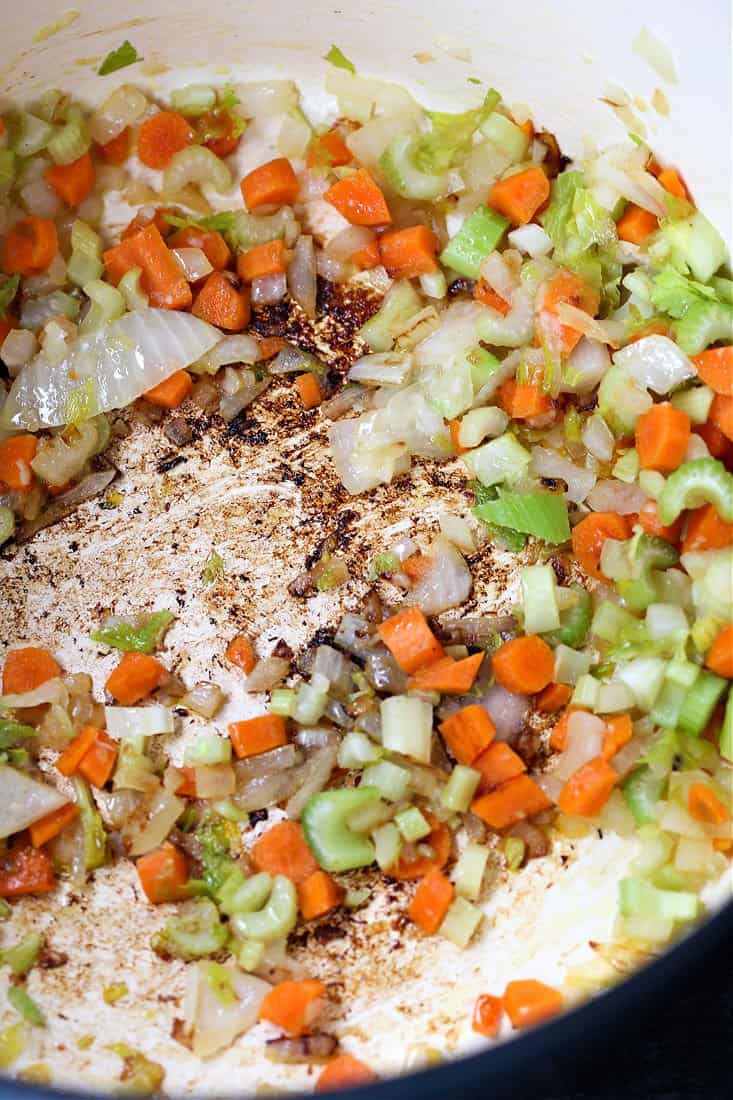 Why Do You Add Wine To A Soup Recipe?

When you add wine or any kind of alcohol to deglaze a pan, it not only works wonderfully but it adds  ton of flavor to whatever you’re making. See how perfectly clean the bottom of the pot is after adding the wine? 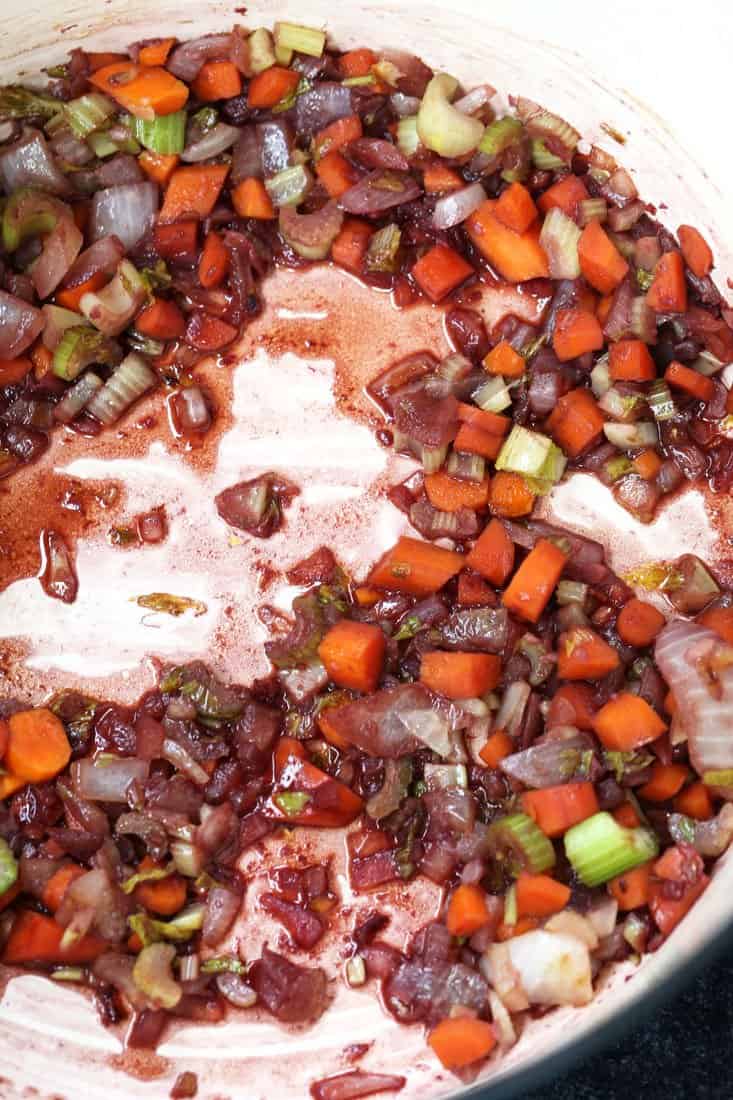 After you have deglazed the pot, stir in the dried lentils and leftover ham. I like adding the ham at this step because it adds flavor to the broth as it cooks. Some lentil soup recipes call for adding the ham at the end, but I feel like you’re missing out on all that ham flavor! 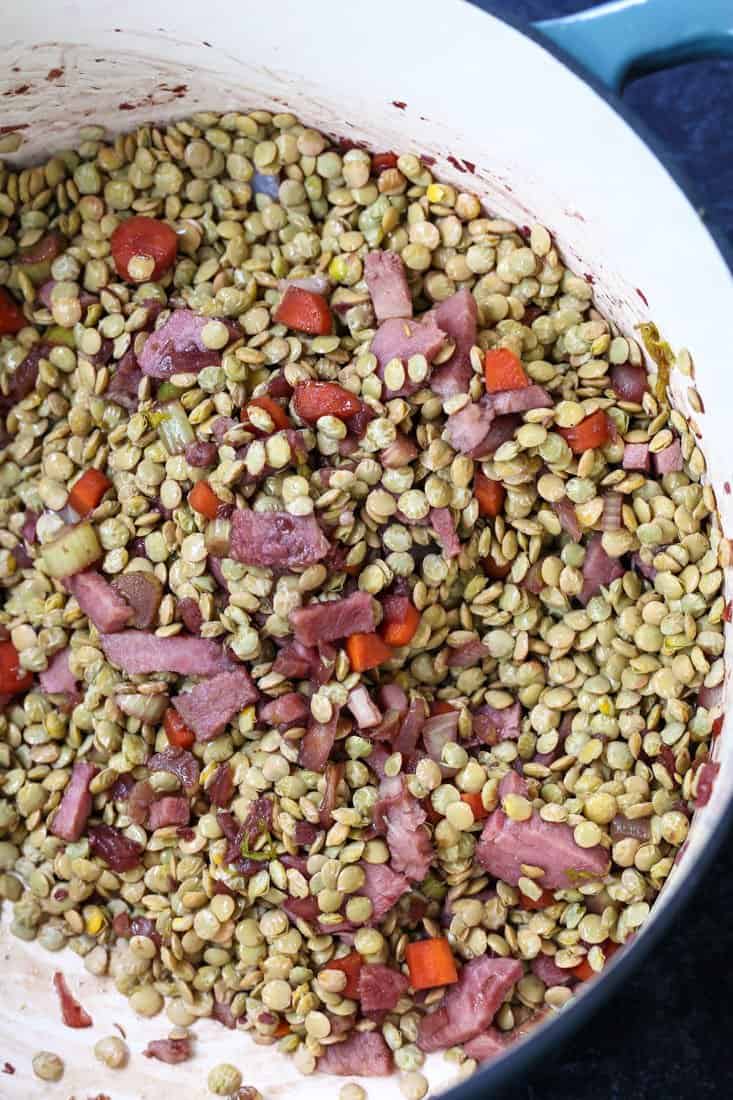 Simmer the soup for about 35-40 minutes until the lentils are nice and tender. Adjust the seasonings in the soup at this point if needed. Our trick to thickening this lentil soup is to take out about a cup of the lentils and mash them in a bowl. Add the mashed lentils back to the soup and stir to combine.

Mashing the lentils will thicken the base of the soup slightly without adding any flour or cream and it’s oh so tasty. 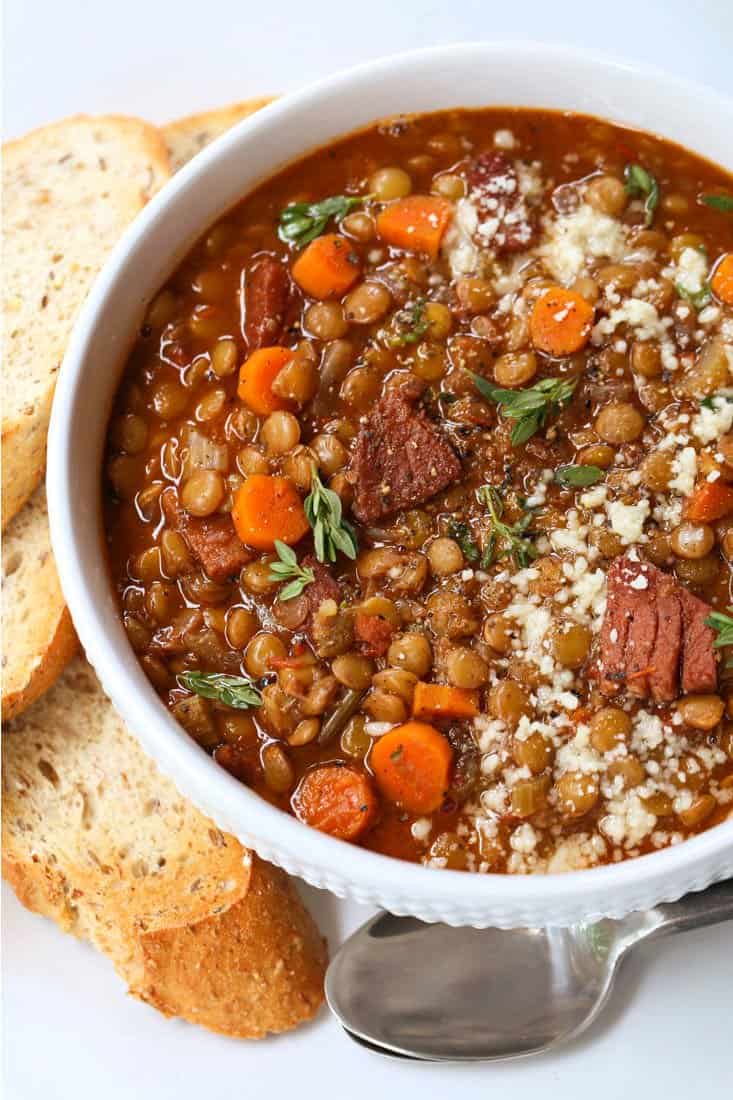 How Do You Serve Lentil Soup with Ham?

Like you see here in our pictures, we love serving this soup recipe with lots of good quality grated parmesan cheese and extra fresh thyme and black pepper. I’m not really sure if parmesan cheese is traditional for lentil soup or not…but I can tell you that it’s super yummy. So we add it. 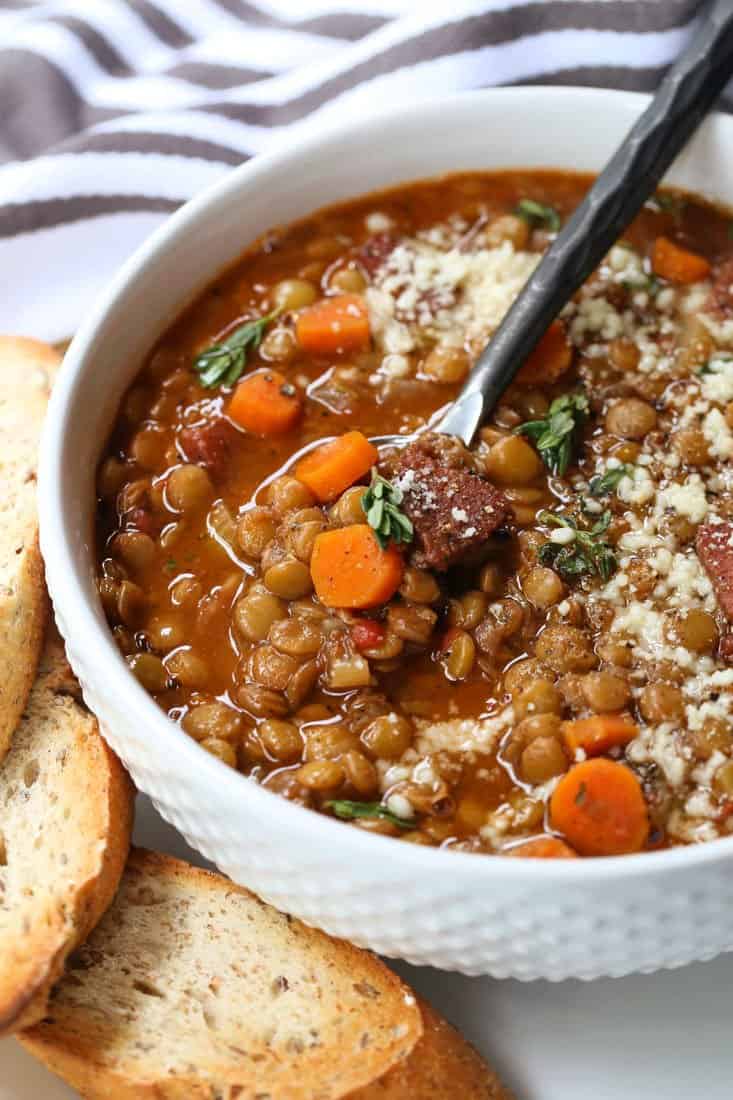 In addition to garnishing our soup, we like to slice and toast some good, crusty bread like a French baguette or ciabatta bread. Slather that bread with lots of salty butter and you’ve got edible utensils for eating this lentil soup with ham.

At least that’s how our boys eat it. The more bread and butter the better. 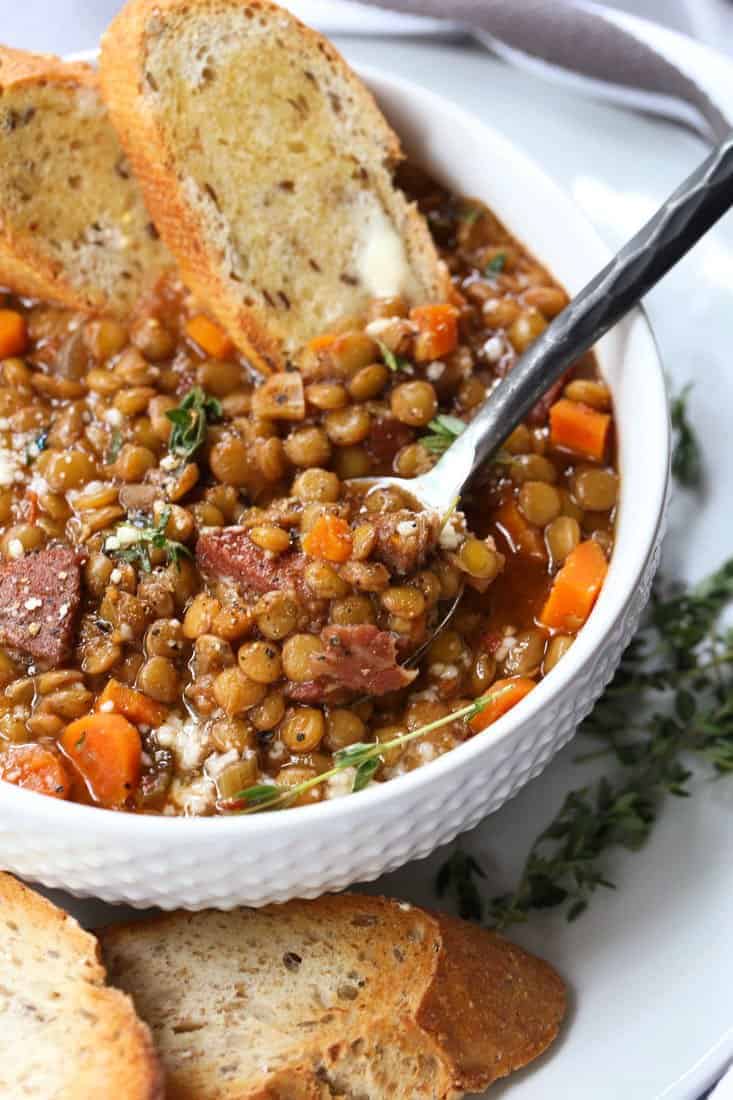 Can You Freeze Lentil Soup?

Yes! Lentil soup freezes perfectly! Especially since there’s no pasta in this soup recipe, all you have are the lentils, ham and vegetables, all which are perfect for freezing. We often make a double batch of this soup, especially if we have a lot of leftover ham, then freeze it in small portions to pull out for an easy meal.

This comforting Lentil Soup with Ham is not only a delicious leftover ham recipe, but you can freeze it for more easy dinners! No leftover ham? No worries! Just grab a ham steak or thick sliced ham from the deli counter!