We make Clam Chowder all year long! A creamy and comforting chowder recipe loaded with potatoes, bacon and clams!

We’re soup obsessed in our house – we make different kinds of soup recipes all year long, no matter what the temperature is. Our popular Beefy Tomato Soup is always on the menu, or more chowder recipes like this Chicken Corn Chowder! 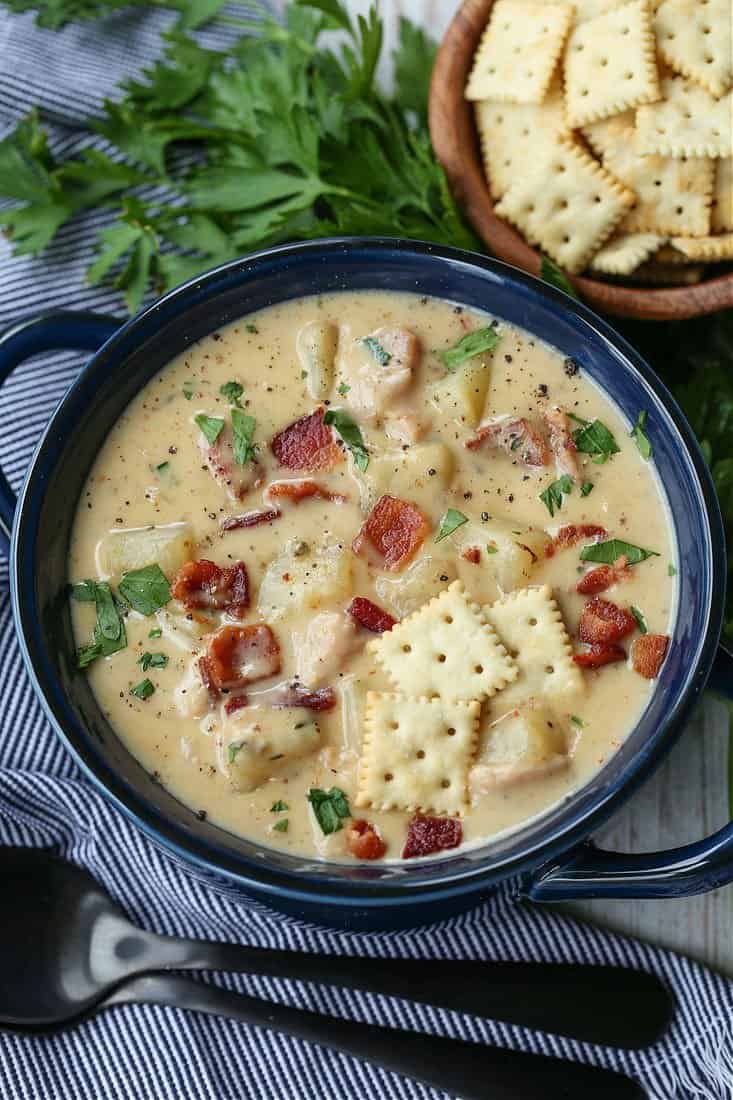 This creamy classic chowder is one of our favorite dinners to make! Serve it in the summer with corn on the cob or bunker down with a big bowl in the winter with lots of fresh bread and extra crackers on the side.

We use canned, chopped clams in this soup recipe to make it easy. You can, of course use fresh clams too if you have them on hand, but we find that grabbing a few cans of clams works just as well!

How Do You Make Clam Chowder From Scratch?

Start by cooking a few slices of bacon, right in the soup pot. Drain off all but a few tablespoons of the bacon drippings, and then cook your onions, garlic and potatoes right in there.

Once the vegetables have softened, add flour to make a roux (this is what helps thicken the chowder) and the pour in chicken stock and clam juice. Bring to a simmer whilw scraping up the bottom of the pot and whisking out any lumps. 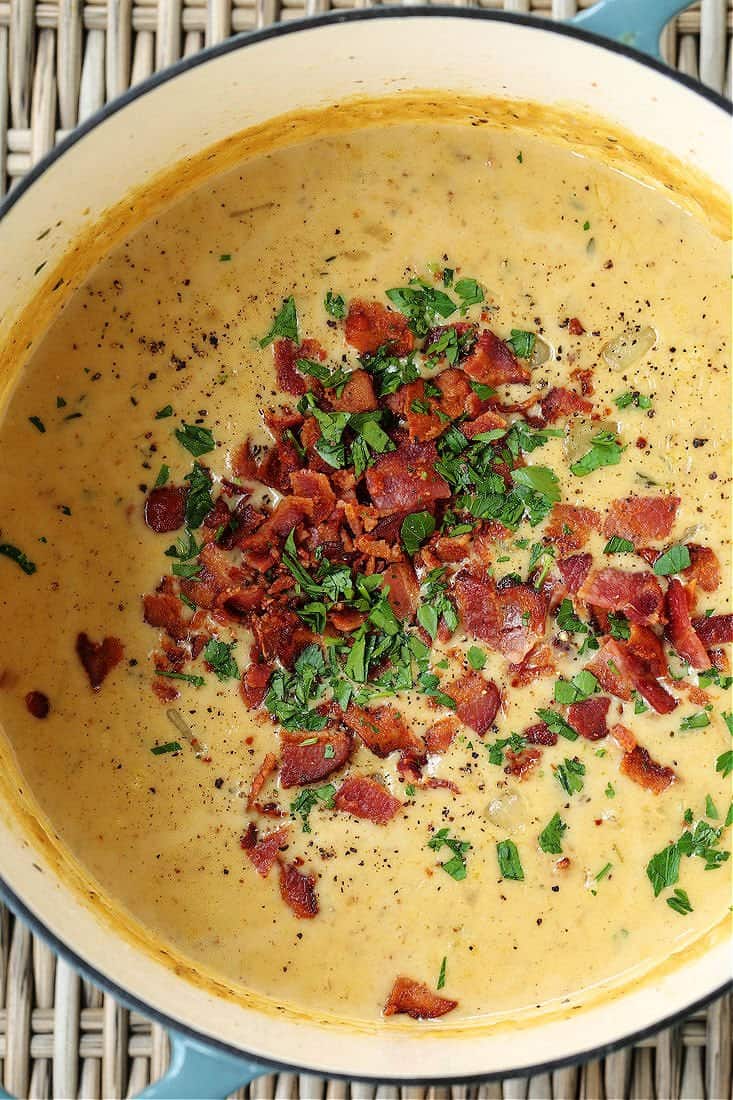 Once the chowder has thickened, pour in milk and heavy cream along with a few cans of chopped clams and their juice. Simmer the Clam Chowder for 20 minutes, partially covered over medium low heat.

Stir the chowder often so that the potatoes don’t stick to the bottom of the pot as it cooks.

After 20 minutes, stir in the cooked bacon and taste the chowder for seasonings. Serve with crackers or bread on the side for dipping. 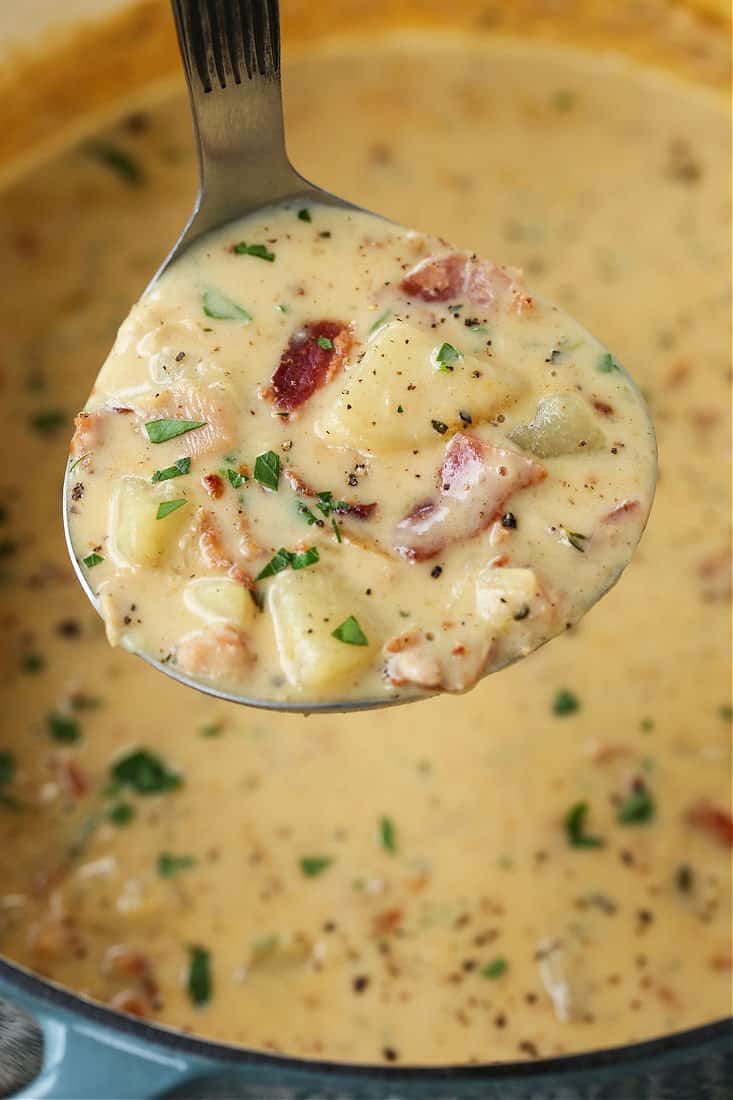 What Are The Best Potatoes To Use For Clam Chowder?

You definitely want to use a russet potato to make New England Clam Chowder. The starch in russet potatoes helps to thicken the chowder, unlike a more waxy potato like red potatoes or Yukon Golds.

But if those potatoes are what you have on hand, of course go ahead and use them up. You might have to thicken the chowder a little more as it cooks but it’s going to be delicious either way. 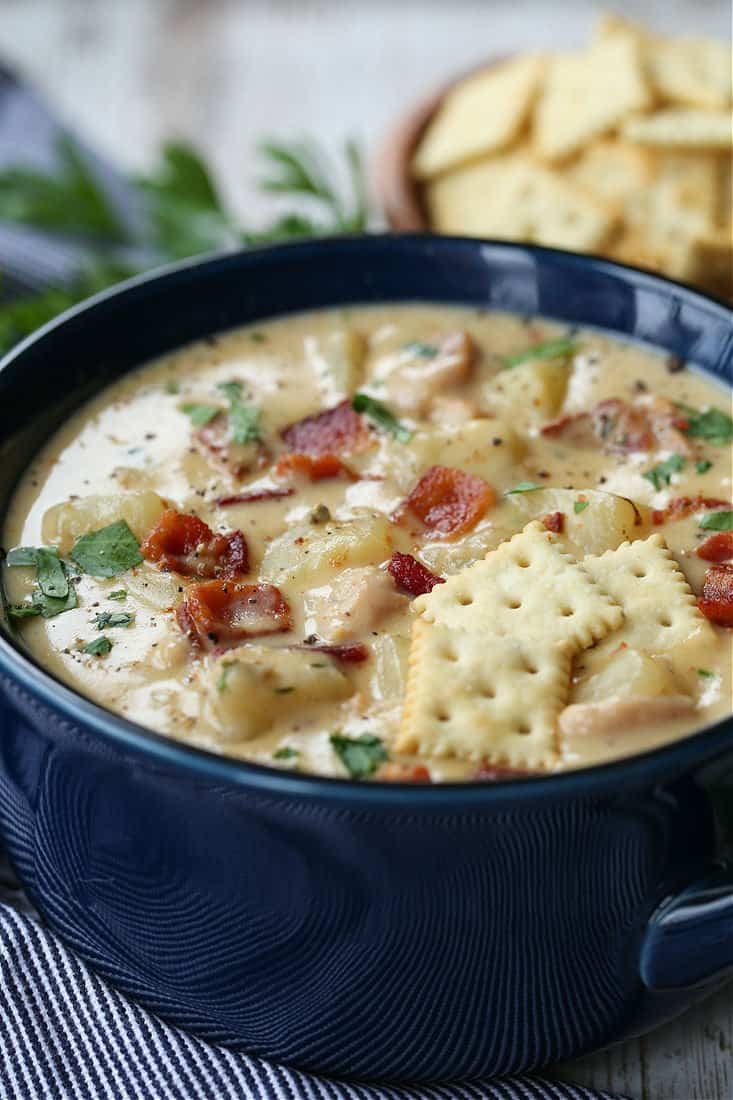 How Long Does Clam Chowder Stay Good For?

Can You Freeze Clam Chowder?

Like most cream based soups, clam chowder doesn’t freeze well. You could make the chowder up until the part where you add the cream and milk, then freeze and finish the soup after thawing.

But as far as saving leftover chowder, you’re best best is just to finish it up!

Creamy and comforting New England Clam Chowder is always on our dinner menu! Packed with potatoes, crispy bacon and clams, this chowder is the whole meal!