We loves twists on recipes like these egg rolls! We turned Cheeseburgers & Fries into a chowder and we took our favorite Chicken Marsala recipe and turned it into chicken wings! 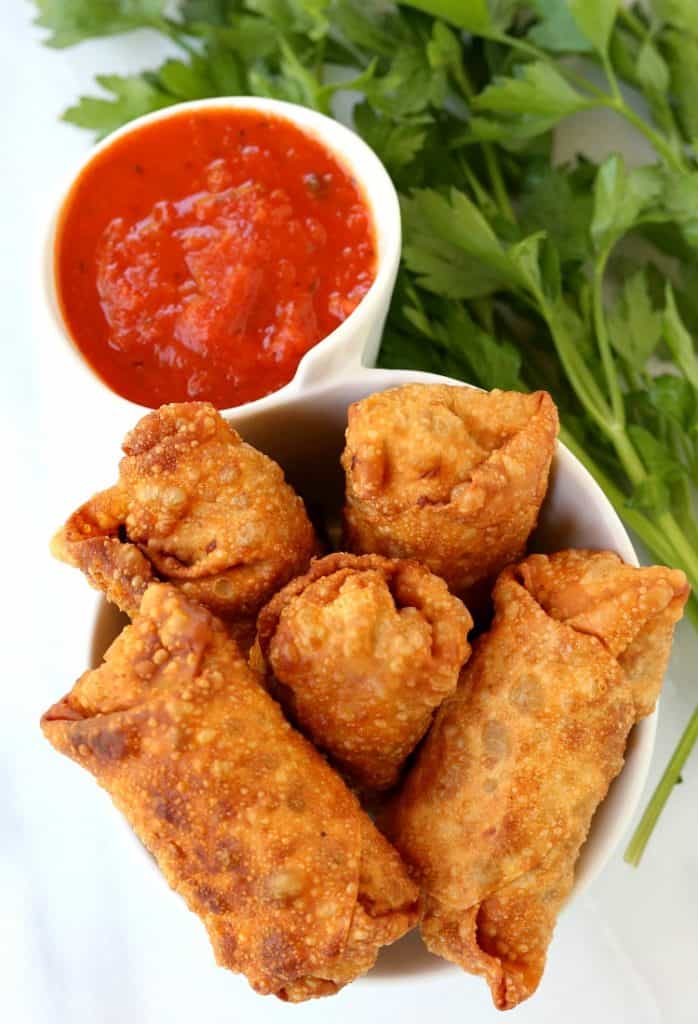 A Fun Appetizer Recipe For Parties

When you’re having a party, or any type of family gathering, you need to bring out the fun stuff. Food and drinks (besides great company) really make a party stand out.

These Italian Pork Egg Rolls are going to do just that. This is the appetizer recipe that everyone is going to be talking about! Homemade egg rolls stuffed with ground pork, peppers, onions and mozzarella cheese! Dip these egg rolls in marinara sauce and you’ve got a party!

What Ingredients Do I Need To Make These Italian Egg Rolls?

Wonton Wrappers: You can find wonton wrappers in the produce department at the grocery store. There’s a smaller size for dumplings but you want the larger size that says egg roll wrappers for this recipe.

Italian Sausage: Buy Italian sausage in bulk without the casings or buy regular links and just remove the sausage from the casings. Milk or sweet will work, depending on your tastes.

Mozzarella Cheese Sticks: String cheese works perfectly in the center of these egg rolls to make a cheesy, chewy center! You can also use shredded mozzarella cheese if you don’t have cheese sticks.

Marinara Sauce For Dipping: Use your favorite jarred sauce or if you have your own homemade marinara sauce – even better! 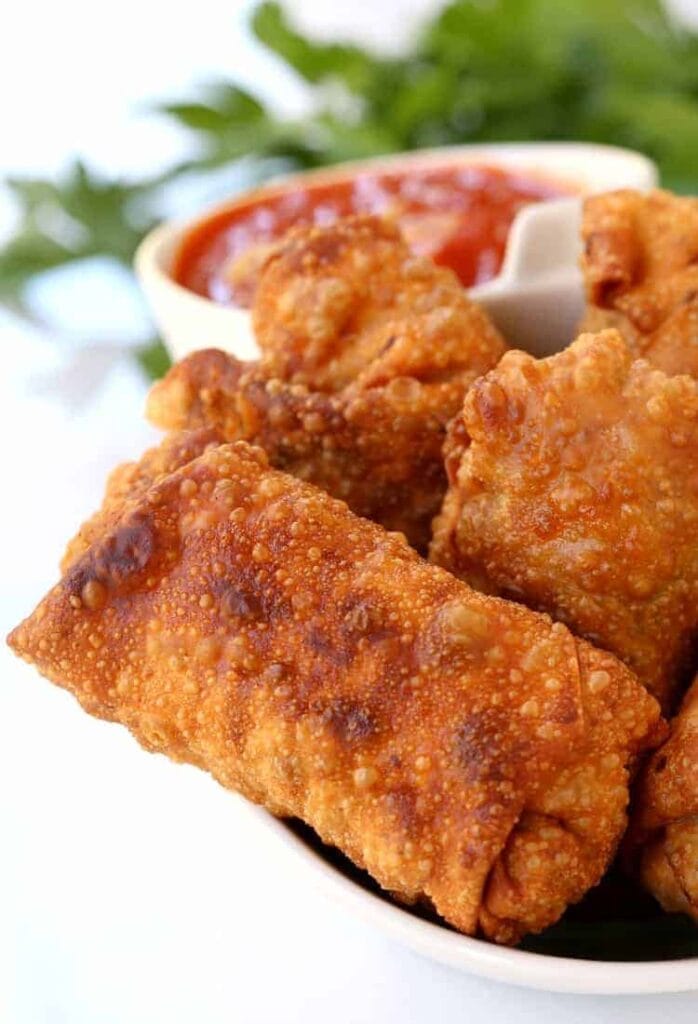 How Do I Make This Egg Roll Recipe?

Start by making the filling. Brown the sausage with onions and peppers in a large skillet. Add salt, pepper and garlic powder and then a little of the marinara sauce which will help to hold the filling together. 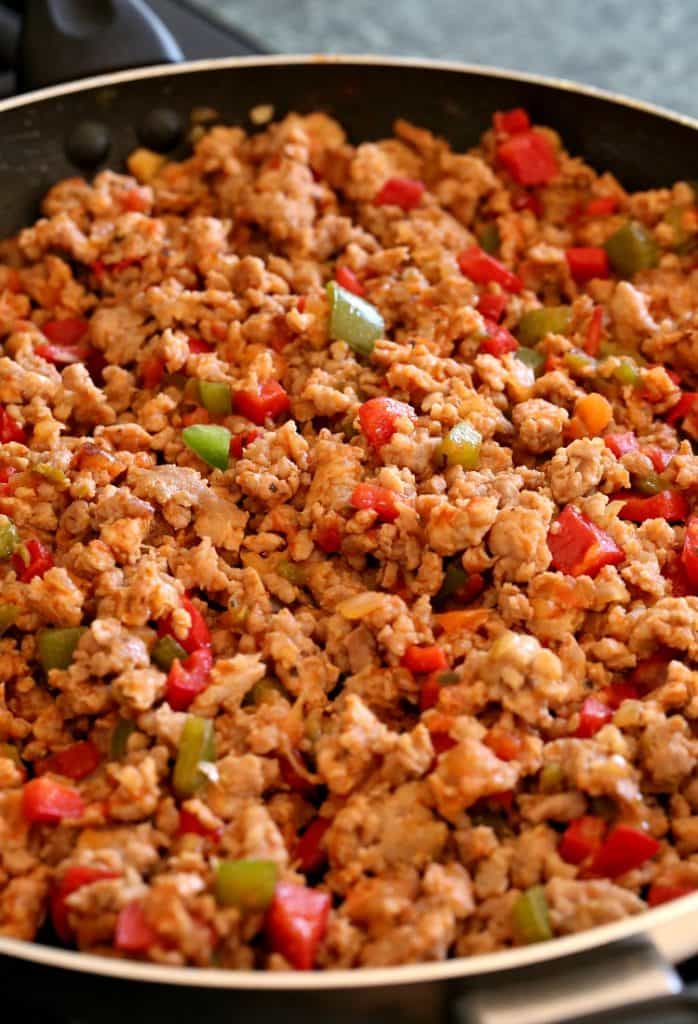 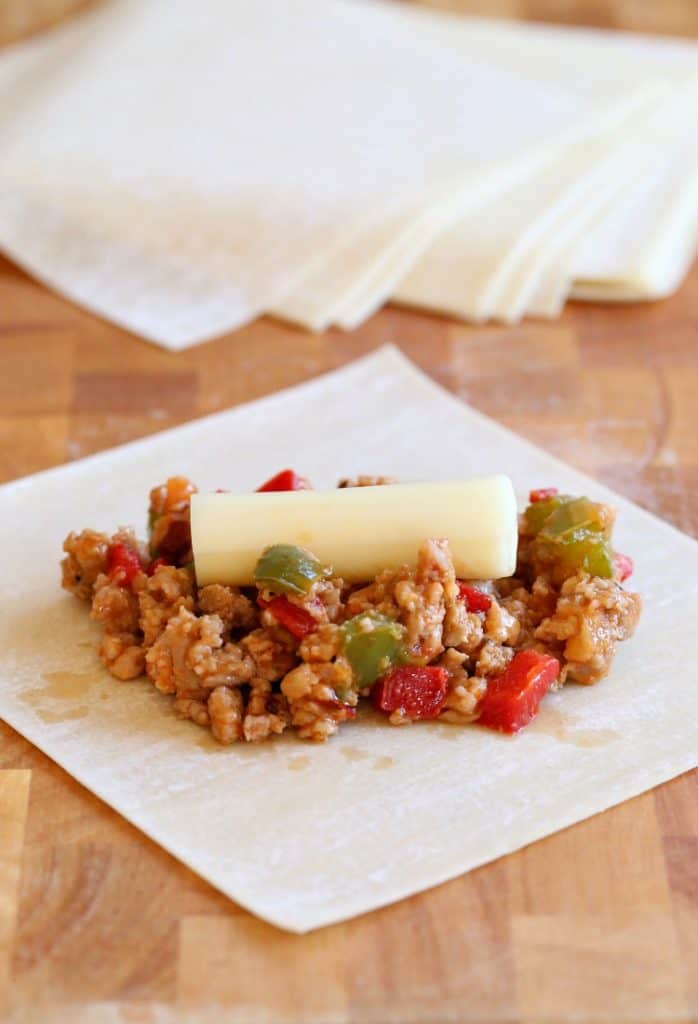 Try and get some of the filling on top of the cheese stick too so it’s not just stuck to one side of the egg roll. Then start wrapping. If you’ve never rolled an egg roll up before it’s just like rolling up a burrito. Fold the top over the filling, then fold in both sides and wrap tight to seal.

An egg wash is the glue that keeps the wrapper together, not just on the edges that you fold up but all over the egg roll when it’s done.

Once you have filled all the egg rolls, start heating a pot of oil for frying. Fry the egg rolls for 5 minutes until golden brown, then remove from the oil and set on a paper towel lined plate or platter to drain.

You can fry a few of these Italian Egg Rolls at a time, it will depend on how big your pot is. You don’t want to add to many at once! 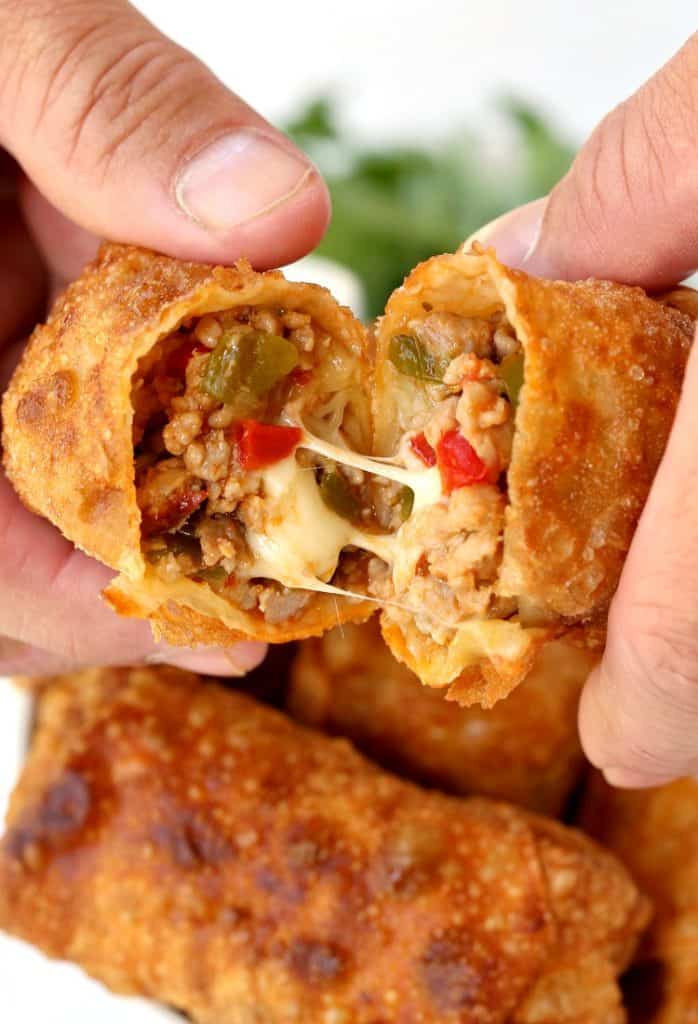 Can I Make This Egg Roll Recipe Ahead Of Time?

You can, but not too far ahead of time. Once the egg rolls are fried, keep them in a 300 degree oven to keep warm for up to an hour or an hour and a half. Keeping them in the oven longer then that will be fine, but the egg rolls wont’ be as crispy.

You can also make these Italian Pork Egg Rolls ahead of time, cool the egg rolls and freeze them. All you need to do is reheat them from frozen and you’ve got some epic appetizers! 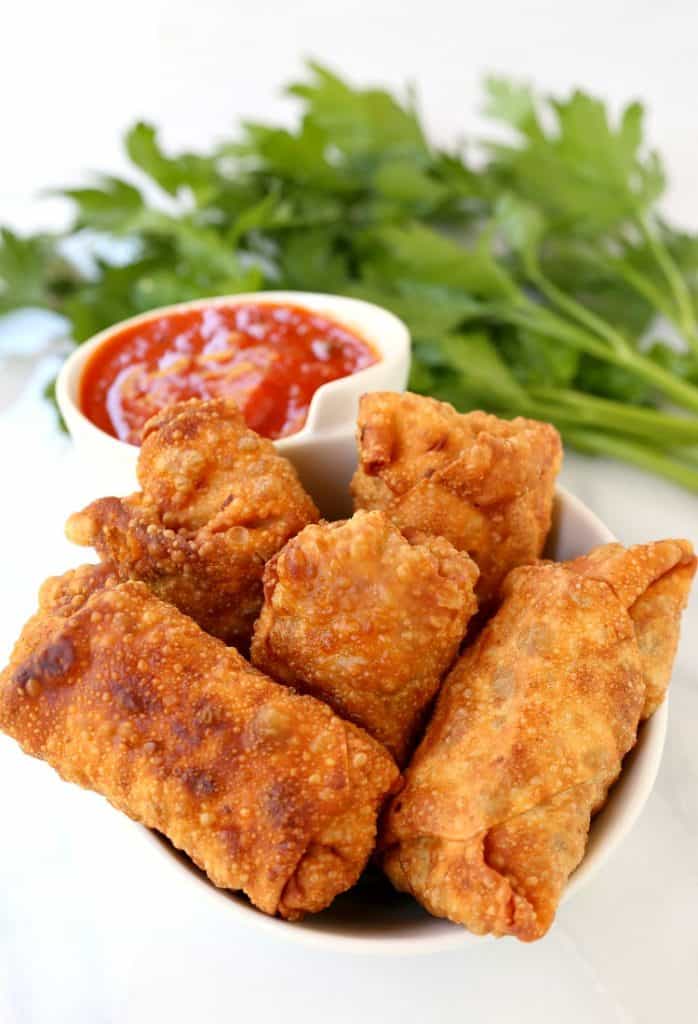 This egg roll recipe has an Italian twist! Italian sausage, peppers and mozzarella cheese fill the egg rolls that are fried until crispy!