This Creamy Penne Vodka Recipe is made with the best homemade, creamy vodka sauce! One of our favorite comfort food, pasta dinner recipes!

How much do you love pasta night? We love it so much, we could eat it every night. Also try our easy Pasta Carbonara served with homemade Garlic Bread for a dinner night everyone will come running for! 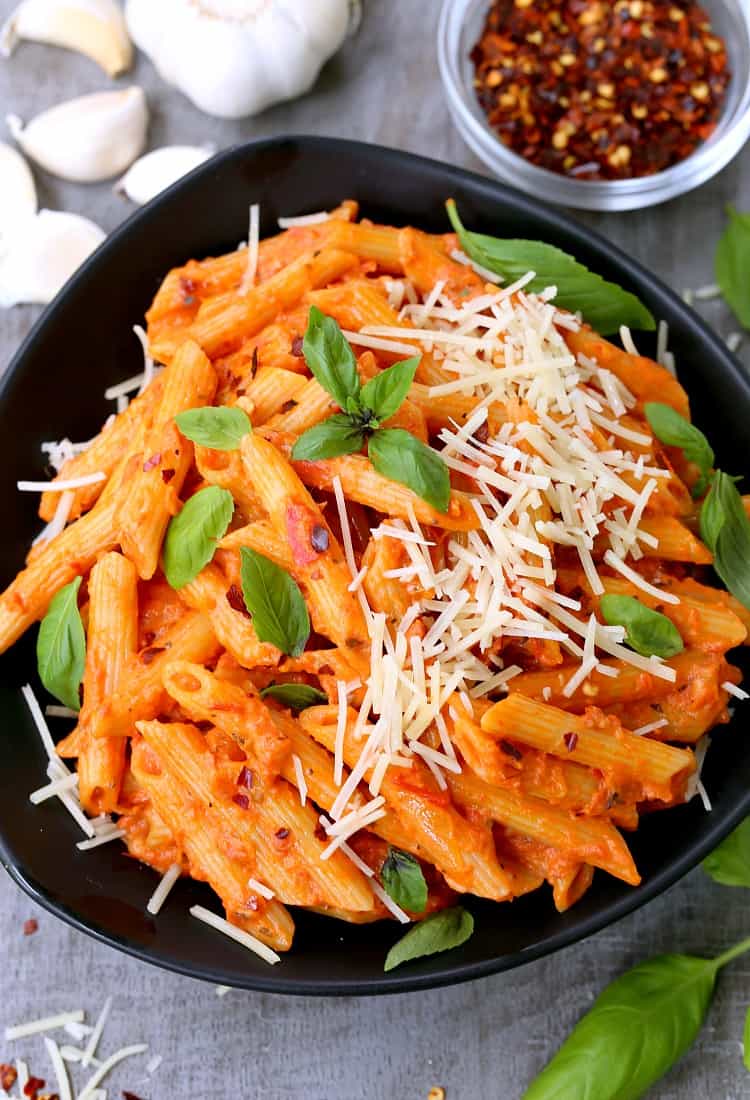 Pasta recipes are one of our favorite things to make for dinner. Maybe it’s because pasta is such a comforting food, or maybe it’s because everyone loves it. No complaints at the dinner table are always a good thing!

Our boys are older now so they just want food and a lot of it. This penne vodka meal disappears whenever we make it and is so good our oldest has learned to make it himself. That’s right, this recipe is so easy our teenage son decided to start making it himself so he could eat even more of it!

You need to make sure that you use heavy cream and real vodka to make this homemade vodka sauce taste just like it came from a restaurant. That and just a few more tips are going to make the best, creamy vodka sauce you’ve ever eaten. 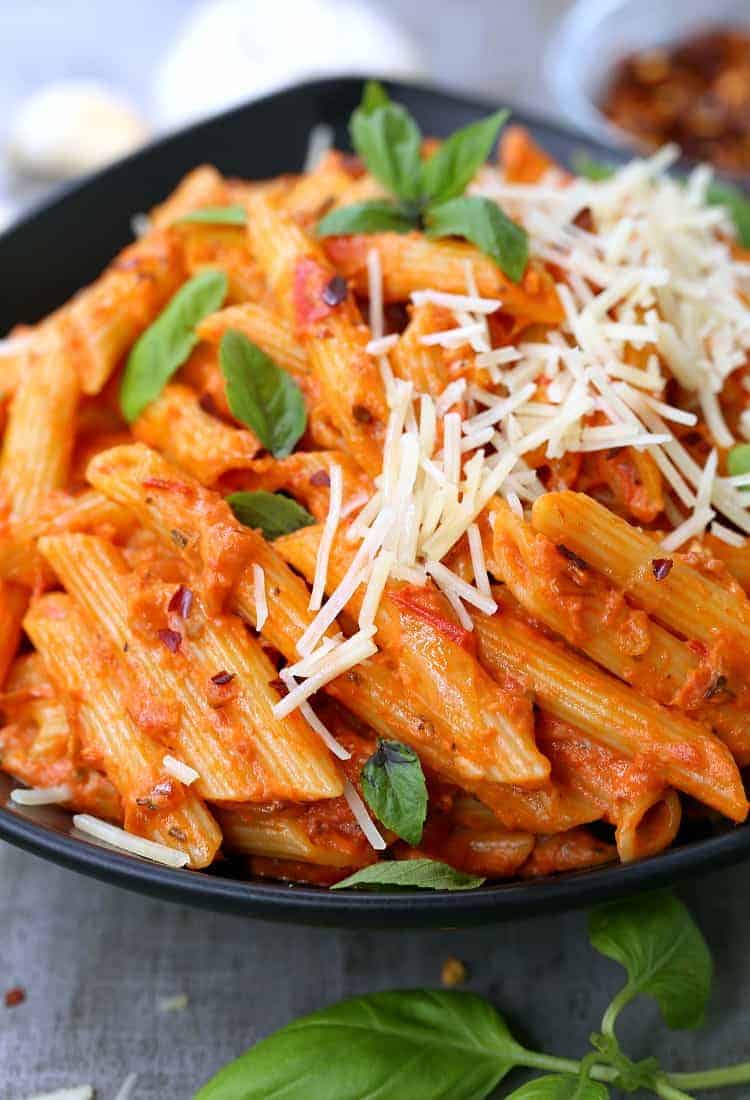 What is Penne Alla Vodka?

Penne Alla Vodka is a popular dish made with penne pasta and a creamy tomato sauce that has a splash of vodka. It is served hot and topped with grated Parmesan cheese. The origins of this iconic pasta dish are kind of mysterious.

Some food historians claim it was invented in Bologna, Italy, while others say it originated with Italian-Americans in the 1980s. Wherever it originated, one thing is for sure: This is one satisfying way to enjoy pasta!

How to Make Penne With Vodka Sauce

Bring a large pot of salted water to boil over high heat. While the water is heating, make your sauce.

The key to a rich and flavorful homemade vodka sauce is taking the time to caramelize the onions. Because when onions are cooked properly they are sweet and delicious. I talk to people all the time that say they don’t like onions – and I don’t believe them. Onions are in almost every recipe, they probably don’t even realize it.

So first, caramelize those onions by heating some oil in your skillet and adding your diced onions. Cook them for 15 minutes over low heat, stirring occasionally. You want them to have a nice golden color. 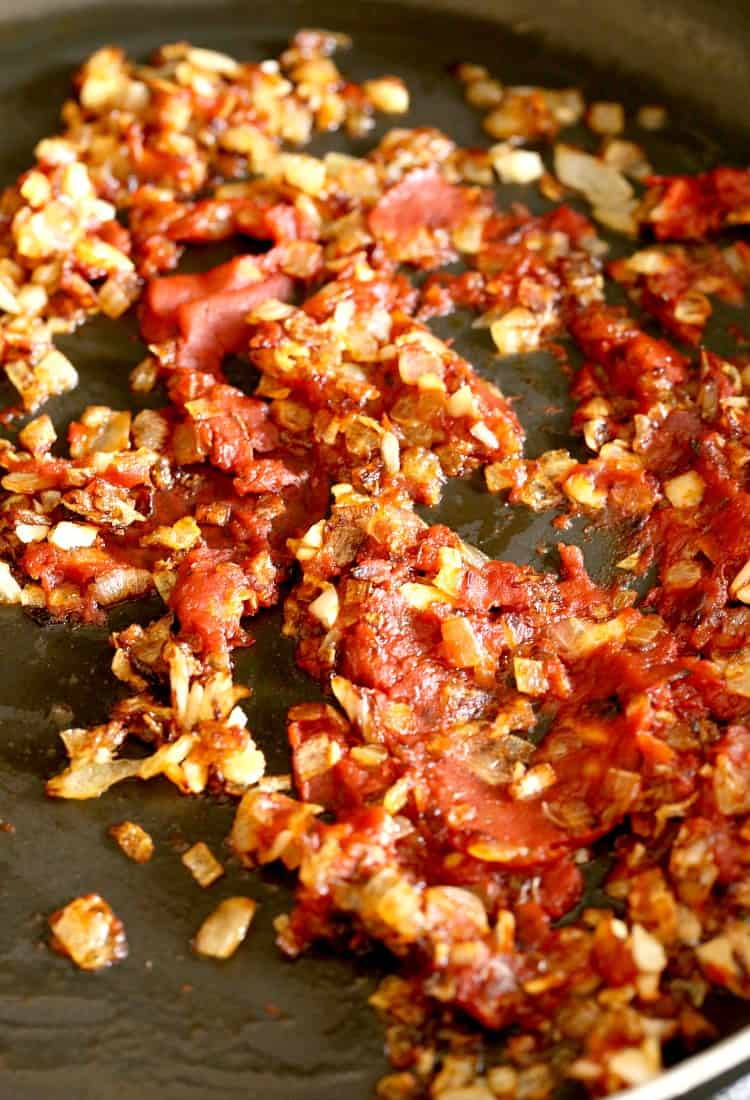 Next add the crushed red pepper flakes and garlic. Stir for a minute longer, then carefully pour in your vodka. Let the vodka reduce for 4-5 minutes. This means you want the amount of liquid in your skillet to evaporate until you only have about half left.

Pour in the crushed tomatoes and whisk everything together. Then add your spices, salt and pepper. Partially cover the sauce and let it simmer for 20 minutes. Simmering the sauce is also a key to making this vodka sauce recipe. When you simmer the sauce the flavors blend together giving you that restaurant quality taste you’re looking for. 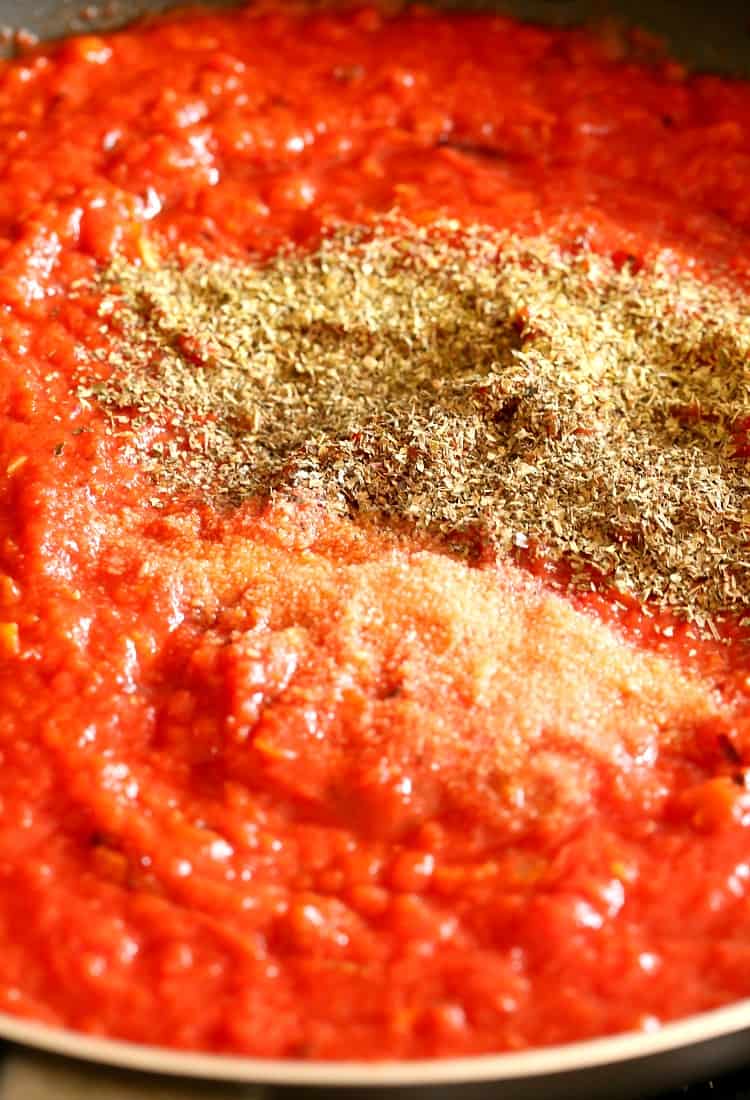 And now my favorite part of all, adding the heavy cream. Whisk the cream into your sauce, taste and adjust the seasonings as needed. Please don’t skimp here on the cream, you won’t get that perfect tasting vodka sauce if you do. We already know that we aren’t counting calories with this pasta recipe!

Once everything is tasting the way you like, remove the sauce from the heat and set it aside. 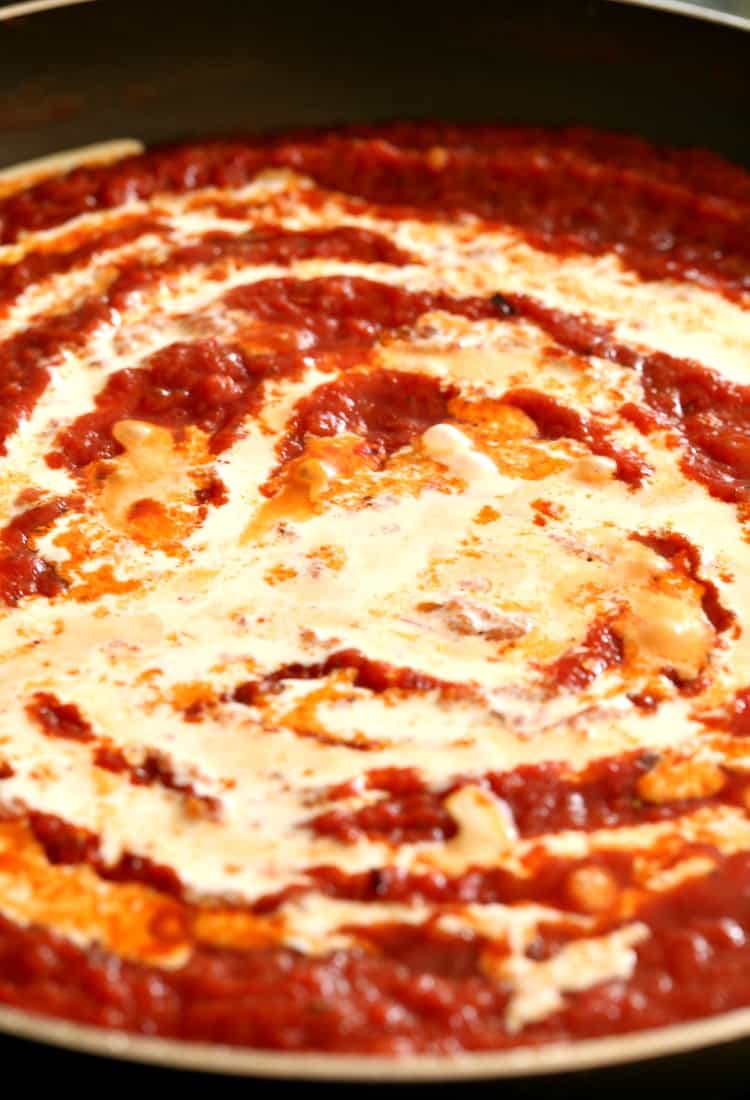 Perfectly cooked al dente pasta sounds intimidating, but it’s very easy to do! “Al dente” just means to the tooth, or on the firmer side when you bite into it.

Add your penne to your pot of boiling water and cook for about 1-2 minutes shy of the package directions. The reason why you do this is because the pasta will continue to cook after you drain it.

Some people run cold water over their pasta to stop the cooking but you don’t want to do that either. Rinsing pasta with water removes all the starch that’s sticking to the pasta – which is what helps the sauce stick to that pasta when you toss it.

Also, when you toss the pasta together with the warm vodka sauce it’s going to cook the pasta even further. So 1-2 minutes shy of the cooking time on the package will result in the most perfectly cooked pasta! 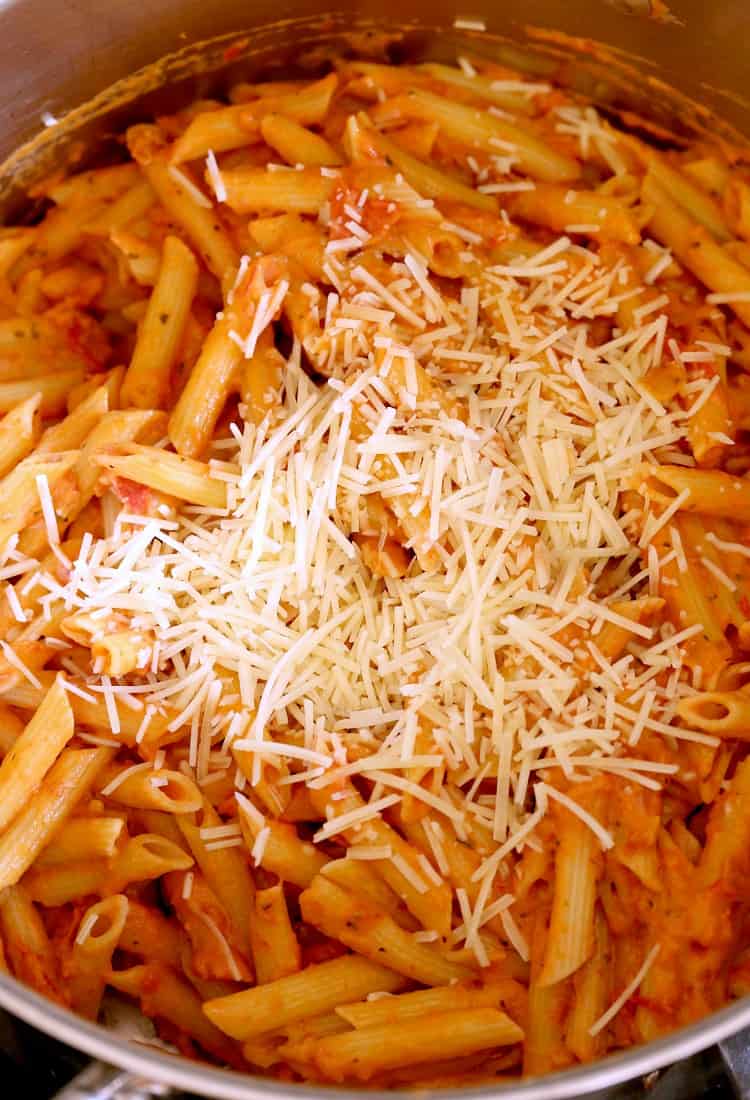 This is the easiest part. Return your drained pasta back to the empty pot you used to boil the water. Then, pour in the vodka sauce. This recipe makes a LOT of vodka sauce. Don’t be shy when you’re pouring it on!

Toss the penne with the vodka sauce to evenly coat all your noodles. The pasta will absorb some of the sauce, infusing that delicious flavor all through your pasta dinner. 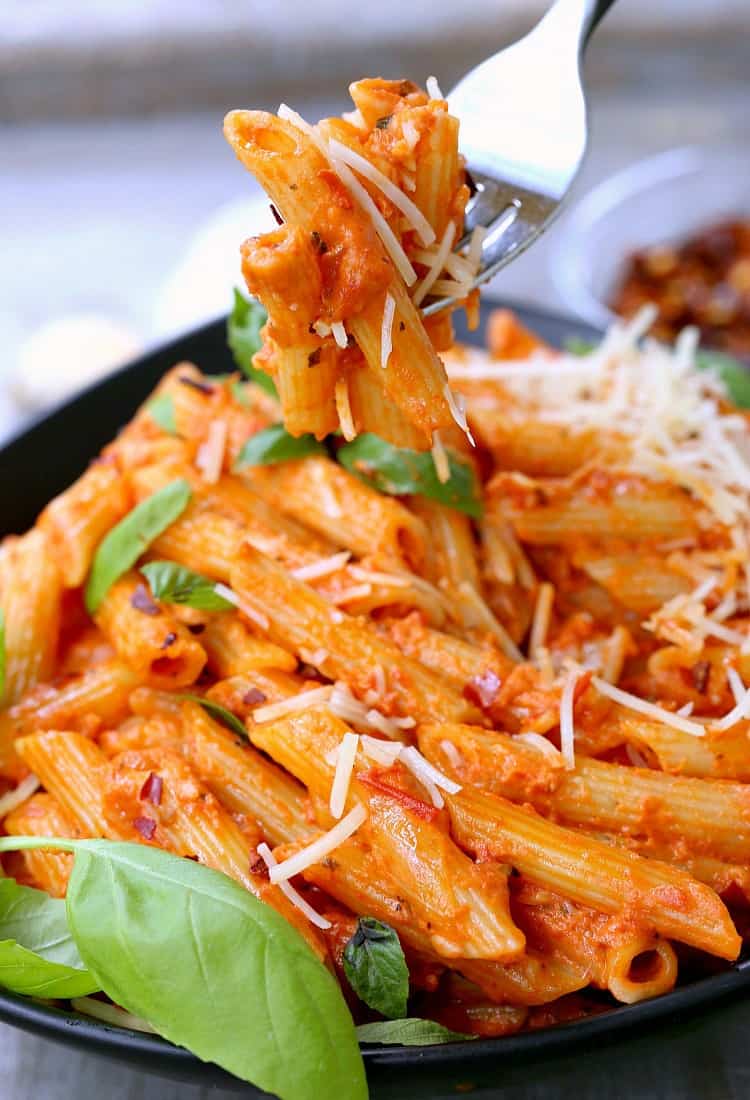 How To Serve Penne Alla Vodka

Once your pasta is assembled, scoop it onto plates or into bowls and top with grated Parmesan cheese. Sometimes we also like to add fresh basil leaves as an edible garnish with a little extra zing.

This pasta dinner goes so well with our homemade Creamy Caesar Salad! I mean, does it get any better than a plate of warm, saucy pasta topped with melty cheese and served with a crisp homemade salad on the side? No, it does not get any better my friends.

How To Store and Reheat Leftover Pasta

We don’t often have leftovers of this penne vodka recipe, but when we do it stores well in an airtight container for 3 days. Let it come to room temperature before sealing your container and placing it in the fridge.

To reheat penne with vodka sauce, just scoop your desired amount into a microwave safe dish and reheat for a couple minutes. Or, you can reheat the pasta on the stovetop over low heat.

Can I Freeze Homemade Vodka Sauce?

Yes! This vodka sauce is so good I often make a double batch and then freeze it.

To freeze vodka sauce, prepare it as directed above and then let it cool to room temperature. Transfer to an airtight, freezer-safe container and place in the freezer. You can store it for up to 6 months.

When you’re ready to use your sauce, just thaw it in the fridge overnight and then pour into a sauce pan and heat on the stove before tossing with freshly cooked pasta. 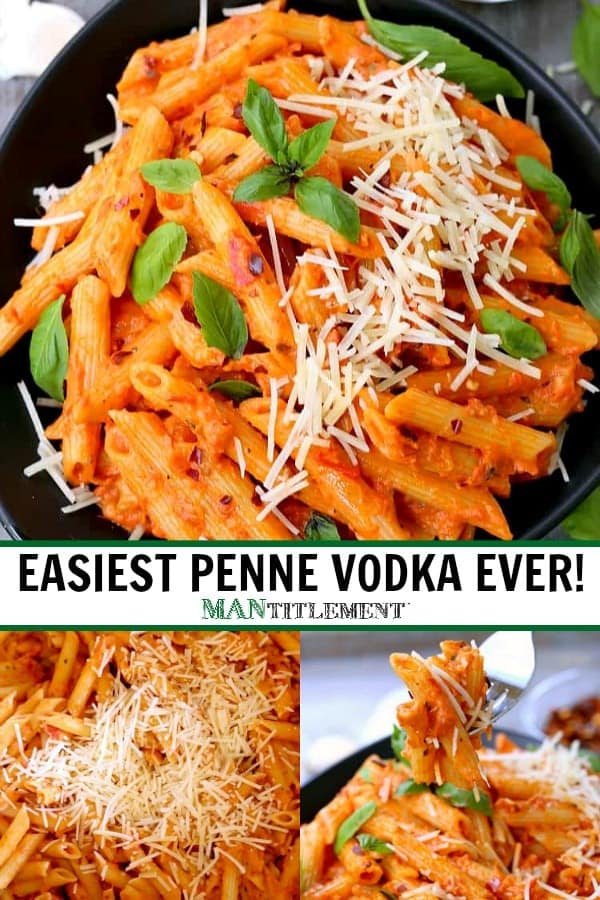 Is it Safe for Kids to Eat Vodka Sauce?

The vodka cooks away when you make this sauce properly, so don’t worry about giving it to the little kids. In fact, so many kids enjoy penne vodka that sometimes people forget there’s actually vodka in it until they make it from scratch at home.

Promise, it’s going to be fine. Although there is a good amount of vodka in this vodka sauce recipe, it does cook out. Reducing the vodka before adding the other liquid ingredients is a key step.

This Creamy Penne Vodka Recipe is made with the best homemade vodka sauce! Tender penne pasta tossed with a rich, creamy vodka sauce that tastes like it came from a restaurant.

*If you are cooking on a gas stove, turn off the flame before you pour in the vodka