Slow Cooker Pasta Fagioli is one of our favorite comfort food meals! This soup recipe is perfect for using up that leftover ham and ham bone!

After we make our Glazed Baked Ham, we save the leftover ham bone for this delicious slow cooker soup! 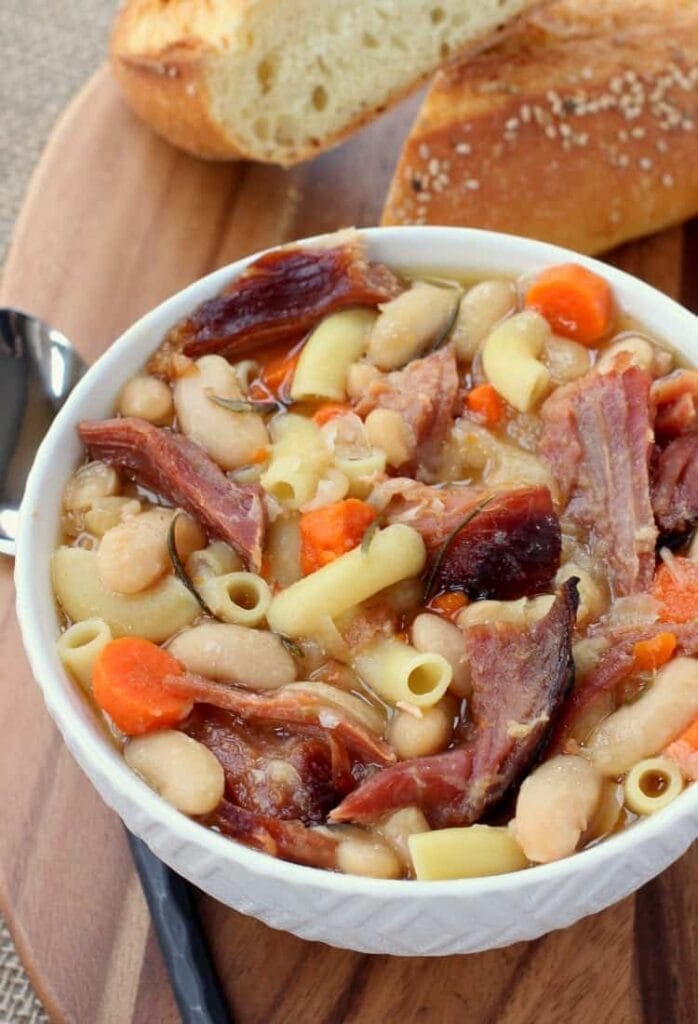 Our Love Of Pasta Fagioli

So my mom always makes ham for the holidays. Except for Thanksgiving, that one is turkey, but most other holidays – it’s ham. Which makes my boys really happy because it’s one of their favorite things to eat.

I’ve mentioned before that Christie and I go prepared to my mom’s for Thanksgiving with our own large stock pot in hand…because we steal her turkey bones after dinner and bring them home to make Homemade Turkey Soup.

You can officially call yourself a foodie when you start to steal your family members leftover turkey carcass. Can’t deal with that going to waste – for one it’s an awesome dinner.

For two it feeds my family for days, and with two growing boys (one who is bigger than me) I’m not letting a few days of food go to waste.

The key is to only cover just to the top of your ingredients. Don’t fill the water up above the ingredients because you’re broth won’t come out full of flavor.

How Do You Make Slow Cooker Pasta Fagioli?

For this Slow Cooker Pasta Fagioli recipe, cut your onions just in half or in quarters and the celery into 4 big pieces each. You’re going to pick out the onions and celery when the soup is done so you don’t want to be fishing around for them these are just fro flavor right now. 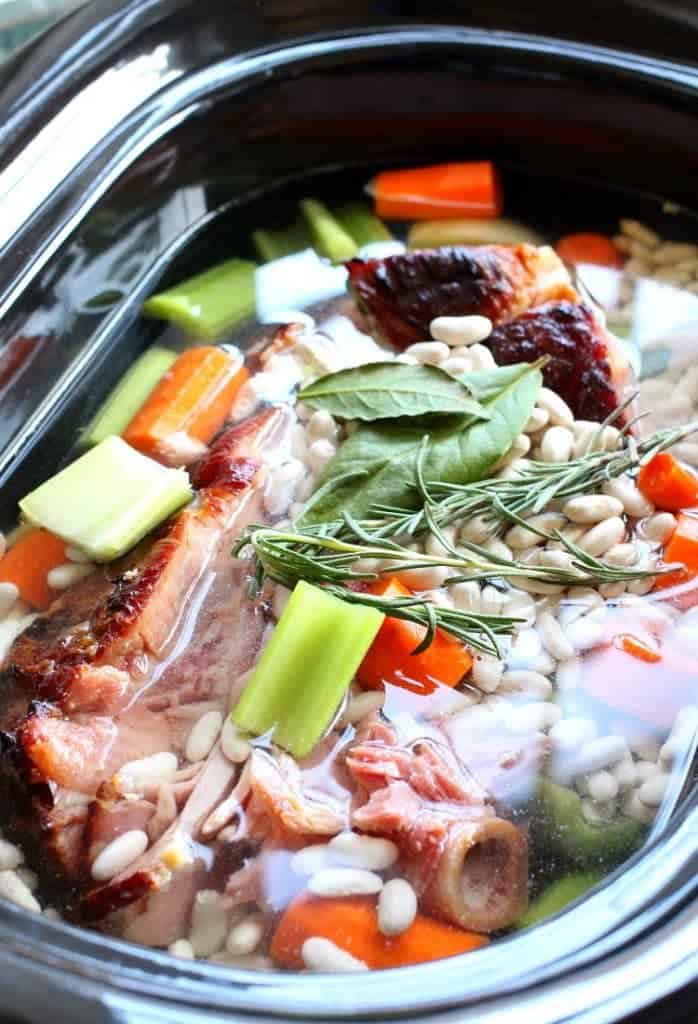 Get the ham bone in along with some herbs, seasonings, water and dried beans. If you don’t have or don’t want to use dried beans, you can add canned beans at the end of the recipe.

Now set your slow cooker on low for 8 hours and let it go to work.

Some of the beans will stay whole after the 8 hours and some will just fall apart. We want some of those mushy beans though, because they help thicken up the soup along with adding delicious flavor to the broth. 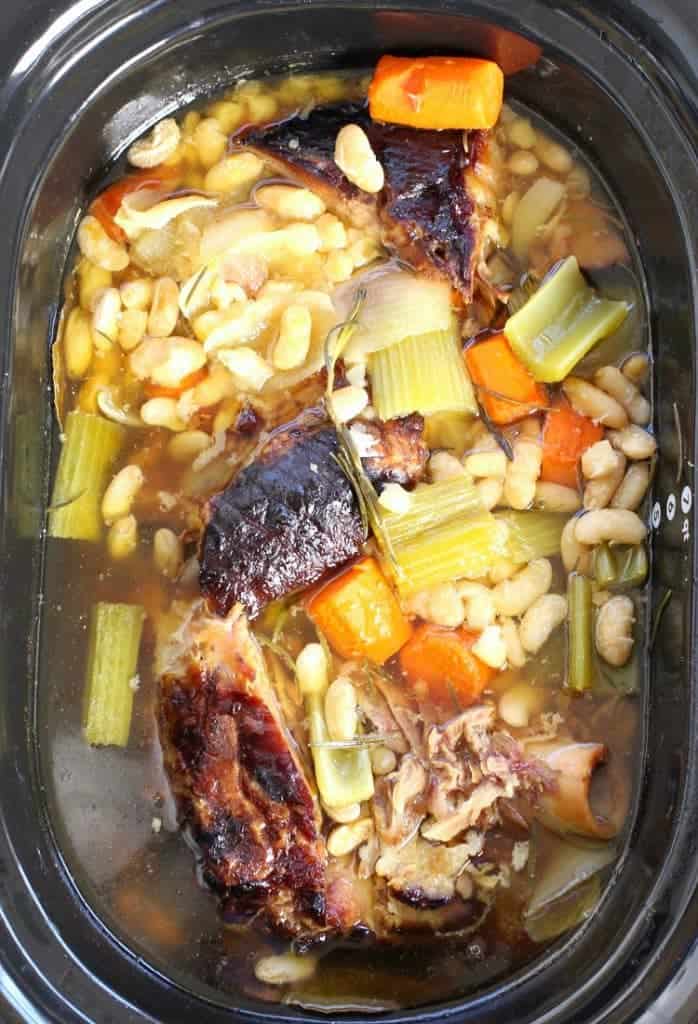 After 8 hours, take out the ham bone and remove the bay leaves, onions, carrots and celery. Discard everything except the carrots, those are going back in the slow cooker.

Dice the carrots into smaller, bite size pieces and add them back to the soup along with the reserved ham and cooked pasta.

Taste the pasta fagioli for seasonings and add any additional salt or pepper if needed – then dig in. 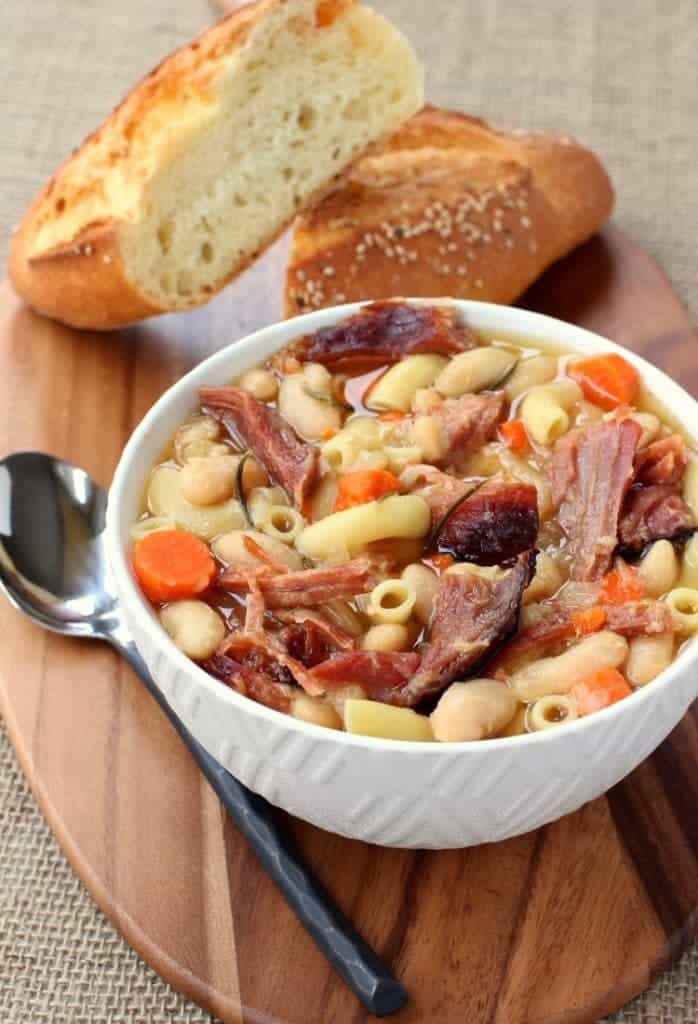 This pasta fagioli is definitely one of our favorite comfort food dinners, and it will feed your family with plenty of leftovers! 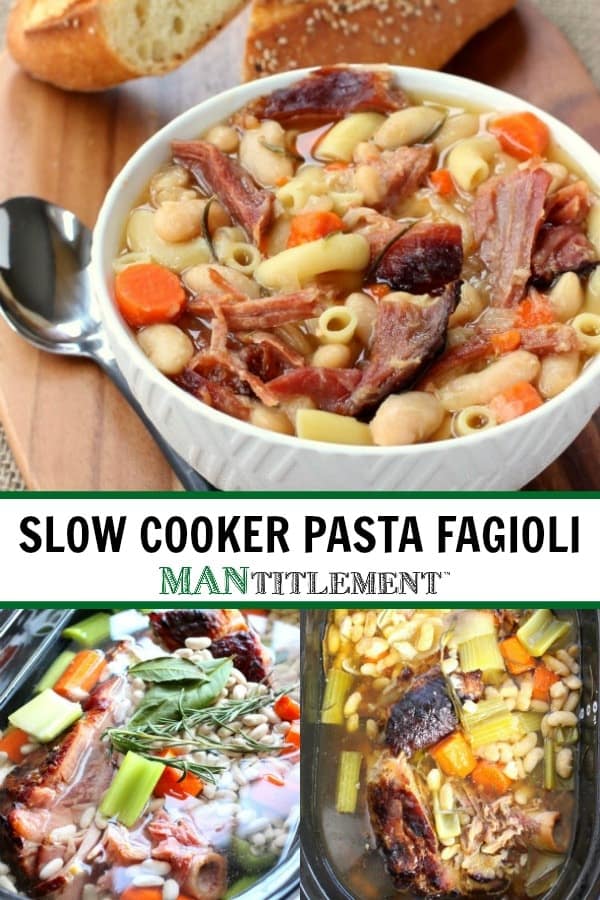 This slow cooker soup recipe is the perfect way to use your leftover ham bone from a holiday dinner!

If you don’t have dried beans, you can substitute canned beans. Just add them in during the last hour of cooking.