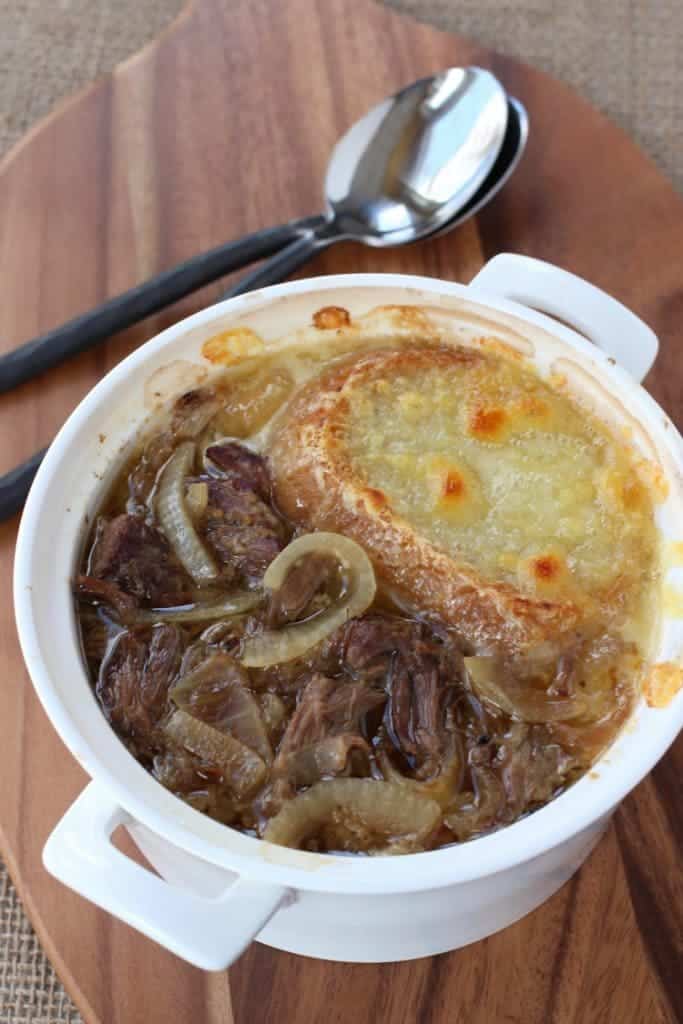 If that weren’t enough to get you to make this Slow Cooker Beefy French Onion Soup, I’ll give you the story behind it too.

We were just on a family vacation in St. John. Just in November but it already seems so long ago…the fact that we woke up to 6 degrees here in Jersey today isn’t helping at all. One night though we made our way through town and ate dinner at a restaurant called Extra Virgin Bistro. It was a really nice, open air restaurant that served upscale Italian food.

First glance at the menu I knew we were in the right place, but the one thing I knew I had to order was the French Onion Soup. Because it had shredded short ribs in it (why? because they must follow the way I think in that everything is better with meat) and it was ridiculously good.

So, you know we had to come home and try our best to make it again – and we totally nailed it.

How Do You Make Slow Cooker Beefy French Onion Soup?

I’m going to tell you right off the bat, this is a two day recipe. It’s not a quick one but it is still an easy one. Also I can promise you that it’s SO worth every minute that it takes to make.

We use our slow cooker for lots of soup recipes like this Turkey Leg Split Pea Soup. That one doesn’t take two days so check it out if you’re shorter on time…

Making the stock in the slow cooker is the first step of the process. Everything goes in the pot and it cooks for 8 hours on low.

We had a large prime rib for one of our holiday dinners so we actually used the ribs cut off from that to make this soup, but seeing as you probably won’t have those laying around – short ribs are the way to go.

As you can see we like our soup beefy, just like our popular Beefy Tomato Soup recipe…lots of beef.

You can remove the ribs at this point, strain the broth into a stock pot and shred the beef from the bones into a bowl.

Put the stock pot in the fridge to chill overnight and separate the fat from the broth. This step is really important, short ribs are fatty so if you don’t do this part you’ll end up with really greasy soup.

When you’re ready to make the rest of the soup, carefully peel the layer of fat off the top of the stock and set the pot over medium heat to simmer. While that’s simmering away, you can make the caramelized onions. This is another way that we use our Slow Cooker Caramelized Onions recipe too!

When the onions are done you can add them to the stock that’s been simmering, along with the shredded beef.

Grab a few oven safe bowls and put them on a sheet pan. Fill the bowls with the soup and top with a piece of toasted baguette and all the cheese you want. 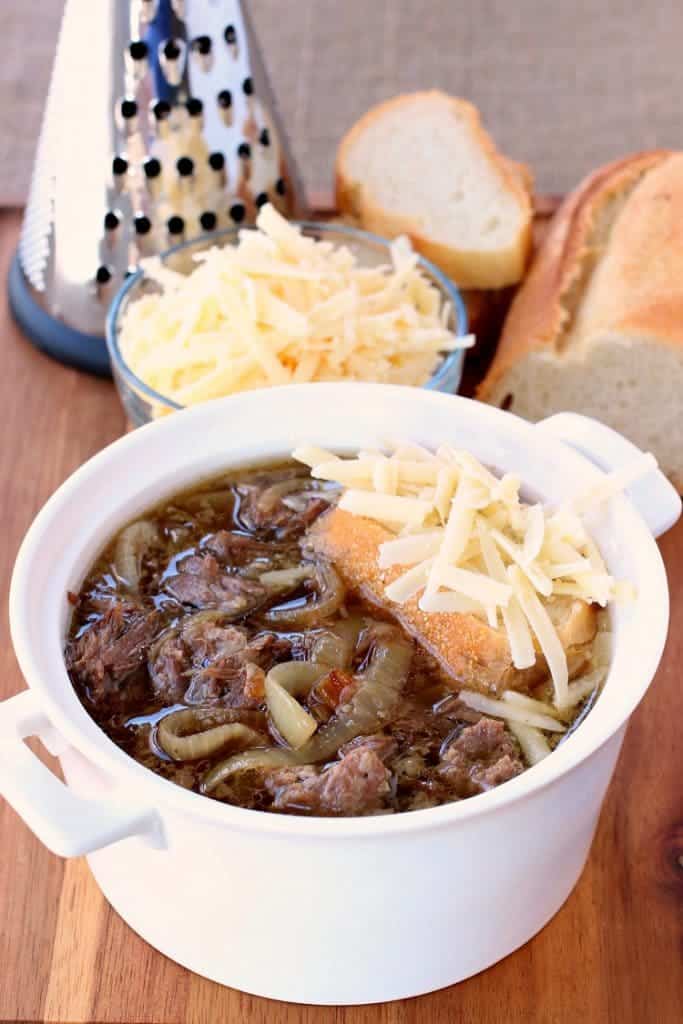 Under the broiler it goes for a few minutes until the cheese melts and starts to brown…then this onion soup is ready.

This Slow Cooker Beefy French Onion Soup recipe is worth the wait. Hopefully you have enough for the next day, too because the leftovers are even better! 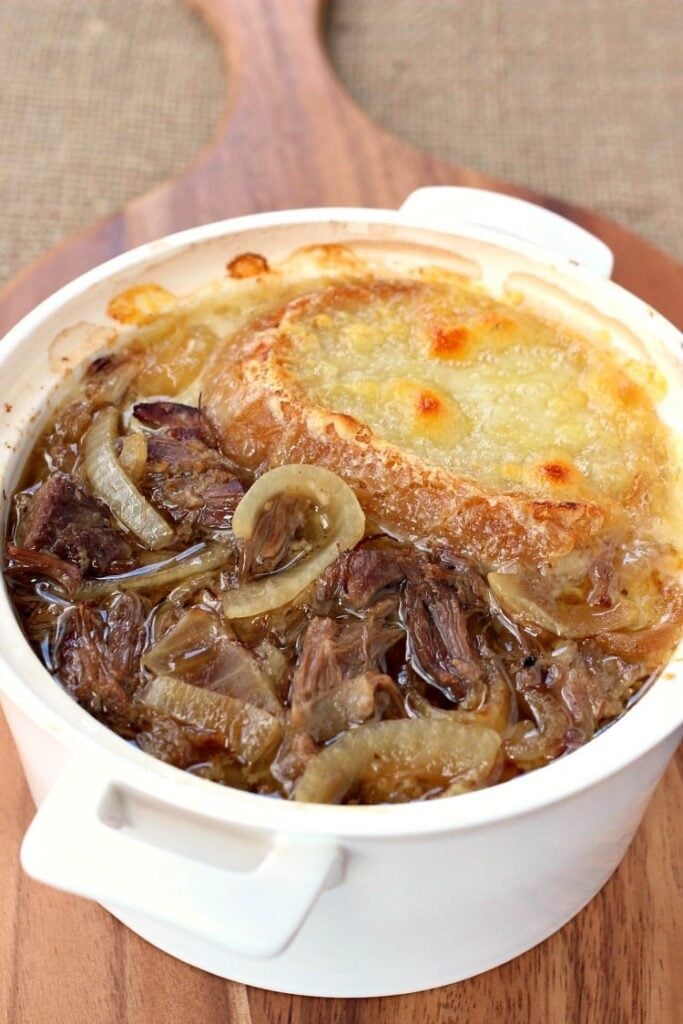 This slow cooker french onion soup is so rich and hearty, the homemade beef stock is so worth making!

For the Caramelized Onions 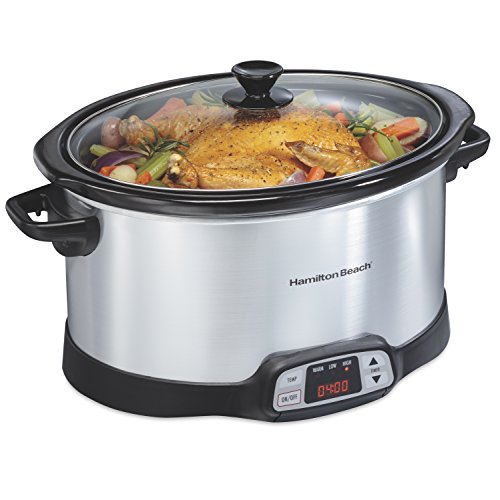 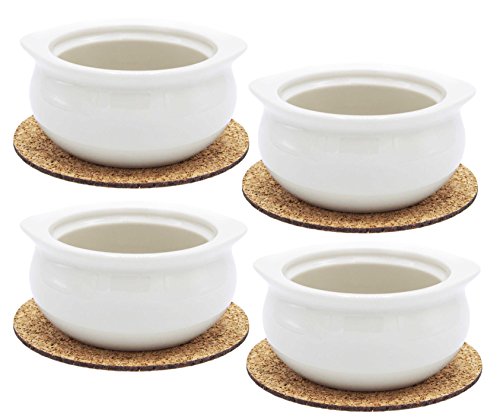