These Beer Glazed Ham Steaks are an easy way to have a ham dinner without cooking a whole ham! A one skillet ham recipe that feels like a holiday!

If you don’t have the need to make a Whole Baked Ham Recipe, this ham recipe is a great alternative for a smaller crowd! 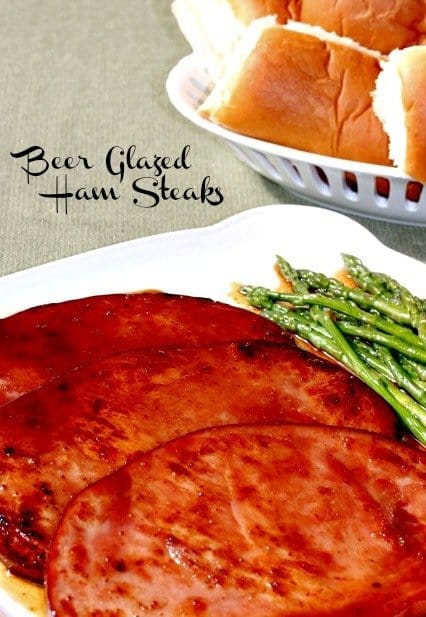 Most people who are having a large family Easter dinner will be making a whole ham, or a spiral sliced ham, that feeds like 100 people.

I love ham, and all the things that you can make with leftover ham so this usually isn’t a problem for me. But there have been times when we’ve been on our own for Easter and for just the four of us, we don’t want to cook a whole ham.

That’s where the beauty of a ham steak recipe comes in! So whether you’re just cooking for two, or you just don’t want to cook that 20 pound ham, these Beer Glazed Ham Steaks will be perfect for your holiday meal.

How to Make A Beer Ham Glaze

I used a brown sugar glaze for these ham steaks mixed with beer instead of using orange juice or pineapple juice like most recipes call for. Because everything’s better with beer right?

You actually marinate the ham steaks in the beer for an hour if you really want that beer flavor to kick in. Or perhaps you don’t want the beer flavor here, but you were really looking for a good ham steak recipe?

Just replace the beer for orange juice, apple juice or pineapple juice and you are good to go. 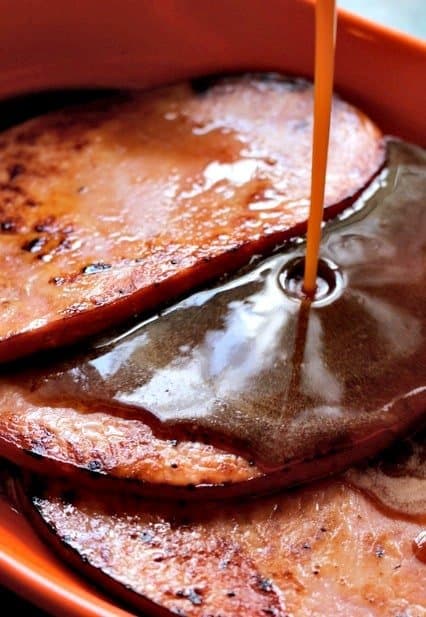 How Do You Cook A Ham Steak?

A ham steak is really already cooked, what we’re doing here is adding flavor and heating the ham up.

If you choose to marinate the ham in beer, start by doing that and giving the ham at least an hour to soak up the beer, but you can go up to 3 hours if you want! Next pat the ham dry and add to a skillet with oil to sear on both sides.

You’ll want a nice, golden color on your ham steaks, both sides please.

Remove the ham steak from the skillet to a plate and cover with foil to keep warm. Now start the glaze in the same skillet whisking dijon mustard, brown sugar and a 1 cup of beer together.

Wait until the beer stops foaming, then bring the glaze to a simmer for 15 minutes until it gets nice and thick. Once the glaze has thickened, add the ham steaks back to the skillet and coat with the ham glaze.

Add the ham steaks to a platter and then pour the rest of the glaze over the top of the ham.

Can You Make This Ham Recipe Ahead Of Time?

Once the ham is glazed and back on a platter, you can cover the ham with aluminum foil and it will keep warm for about 30 minutes. Or you can transfer the platter of ham to a 300 degree oven until you’re ready to eat.

What Can You Serve These Ham Steaks With?

So, so, so many sided dish recipes go wonderfully with ham! Check out our Side Dish Menu for a whole list but I’ll give you s few simple, side dish recipes to pick from here!

You could spend a little more time on the side fish for this ham since these ham steaks are so easy to make. But most of the side dishes that I’ve listed here should take less than 30 minutes to prepare.

These Beer Glazed Ham Steaks are an easy way to have a ham dinner! Just a simple ham glaze takes this ham recipe up a few notches in flavor!