These Lobster Wontons are an easy & tasty lobster appetizer that won’t break the bank! If you’re looking for lobster recipes on a budget, this is it! 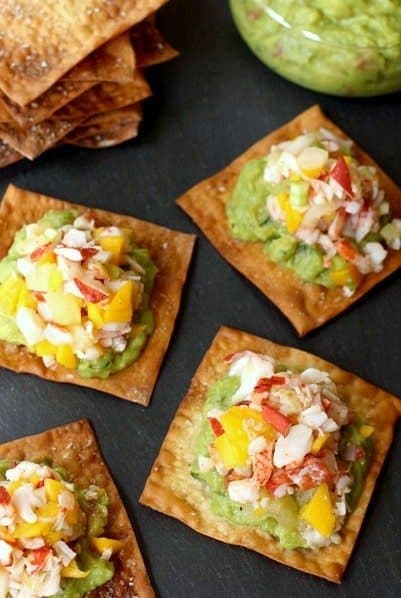 These are more of like a bite-sized taco but with all the flavors that big lobster taco should have. Steamed lobsters were on sale this week at the grocery store, so I ran over a grabbed a few…then it was time to get all the meat out.

All the meat, 2 lobsters gave me 7 oz. of lobster meat. Not even a half pound. But don’t worry, that’s all you need to make these Lobster Wontons! 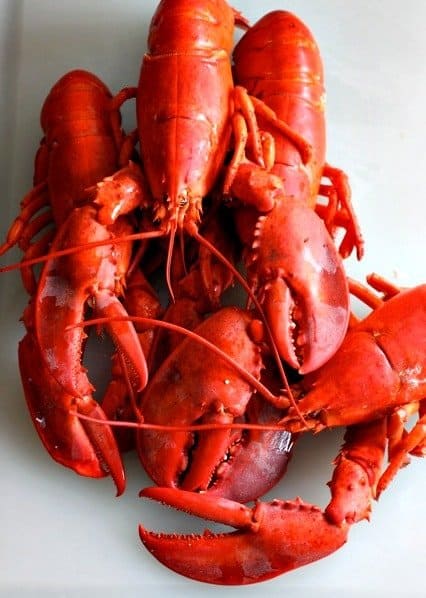 OK, so it kind of takes forever to get all the damn lobster meat out, not my favorite part….but now the hard part is over.

How to Make Lobster Wontons

Time to bake the wontons. Brush them with a small amount of oil, then add some cumin and salt.

They come out of the oven totally crispy, even better than frying them. Just watch them as they’re cooking, they go from golden brown to totally burnt fast.

I had to improvise and use store-made guacamole since the avocados were hard as a rock that day at the store, but the kind I got was actually pretty good – with a little bit of spice to it which was perfect for the sweet lobster salad on top.

Start off by making the lobster salad – chop your steamed lobster into pretty small pieces and place in a bowl.

Add in the diced mango and pineapple, the juice of the lime, salt, pepper and scallions. You could add some crushed red pepper flakes or sriracha if you like it a little spicier at this point. But I thought with the spicy guacamole this worked out good.

Mix it up and place it in the fridge to chill while your wontons are baking…then assemble your Lobster Wontons by adding a large spoonful of guacamole to the center of one of the wontons, then another large scoop of the lobster salad on top.

That’s it – Lobster Wontons. You can get about 15-18 wontons from this recipe, so enough for a light dinner for 4 or appetizers for a crowd.

Who wouldn’t love to walk into a party and see a platter full of these? 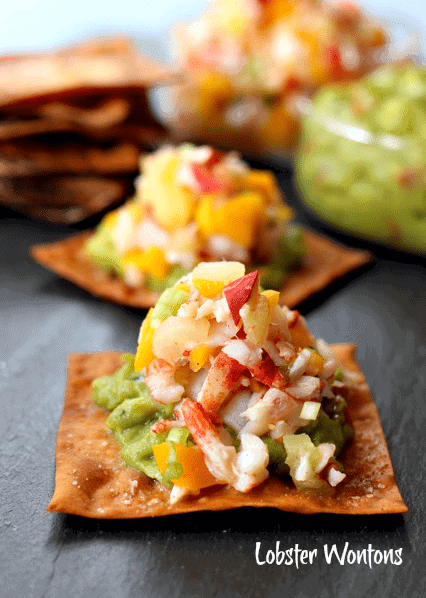 I know I would. And you don’t have to tell them it only cost you 15 bucks to make! So as far as a crazy good, budget friendly lobster recipe? We know this is the one you’re going to come back to time and time again!

Lobster Wontons are an easy & tasty lobster appetizer that won’t break the bank! If you’re looking for New Years Eve food ideas, this will be a hit!

You can also use your favorite cracker or pita chip for this recipe. Or serve the lobster salad in a bowl with tortilla chips for dipping!