Hot Dog Bun Stuffing Recipe is a twist on classic sausage stuffing that both kids and adults will love! A fun side dish for Thanksgiving, but we definitely make this stuffing more than just once a year!

Love stuffing? We really, really do too! Our all time favorite stuffing recipe is Sausage Stuffing, a recipe tweaked a bit from mom and we love it so much that we make it all year long. 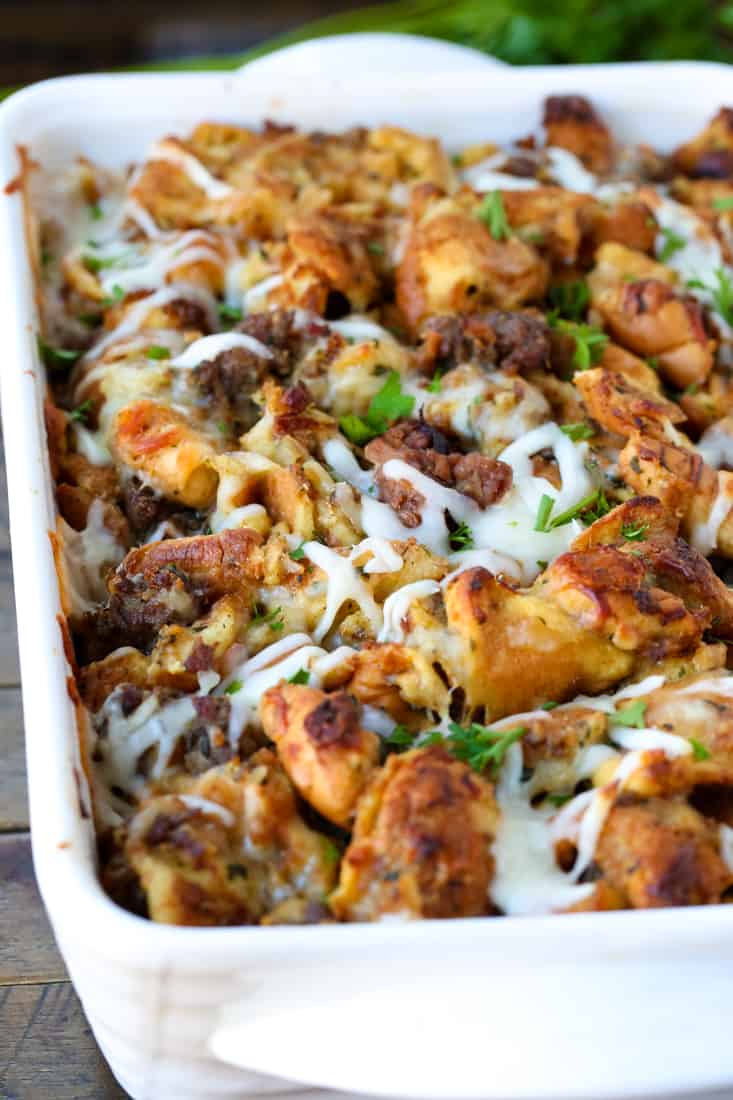 I don’t find that a lot of kids like stuffing, but I’m here to tell you that they are going to LOVE this recipe! Our boys aren’t stuffing fans, really but they love this stuffing. Mild sausage (or ground beef) with soft, toasted buns and tons of mozzarella cheese!

Thanksgiving was always one of my favorite dinners, but it was always the same. The same turkey, the same side dishes and the same stuffing.

My mom’s stuffing was actually stuffing – she cooked it inside the turkey, and still does. We usually cook our stuffing, which is technically dressing, outside the bird in a casserole dish. But both ways are so good, I’ll take whatever stuffing recipe I can get.

Hot Dog Bun Sausage Stuffing really came into my head because we had 4,000 bags of hot dog buns left over from our Halloween party this year. Usually we’re scrambling for more hot dogs and buns and that was NOT going to happen to me this year.

So I bought way more of both than I needed and we had so many left. Since Stuffing Week was on our radar, I thought that using hot dog buns to make stuffing was a pretty great idea.

I mean, it’s really just white bread right? Which makes the best stuffing recipes anyway so I figured it was a win win. 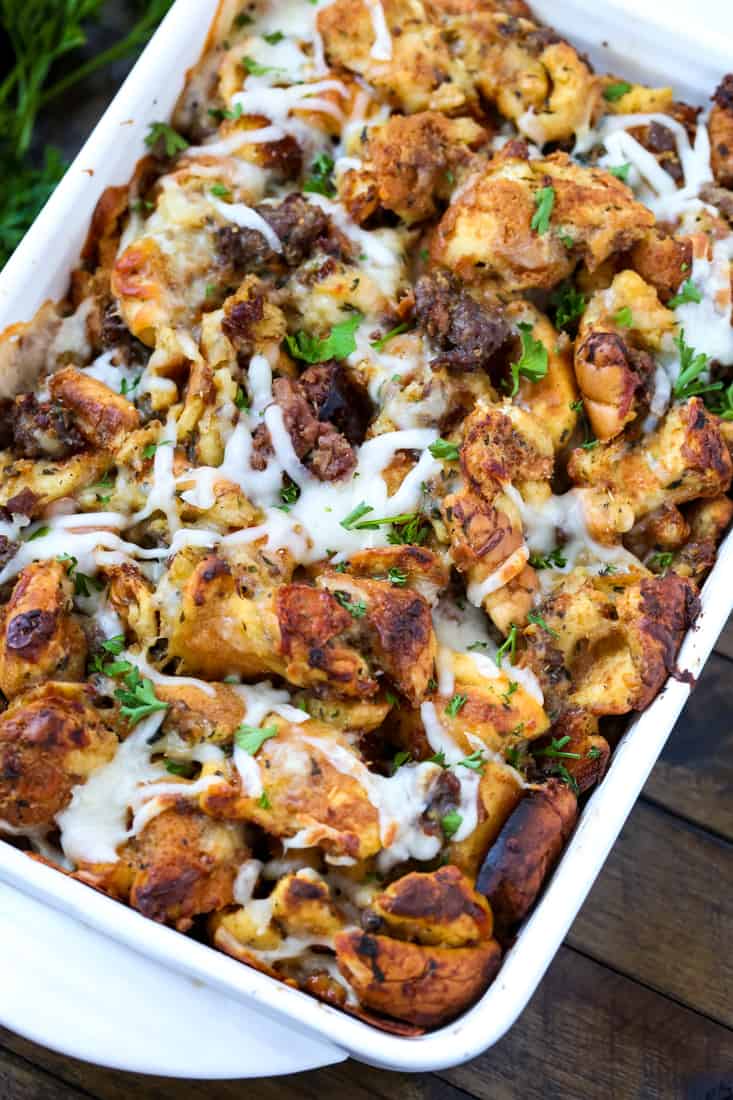 What Can You Use Instead Of Sausage For This Recipe?

If your kid (or you) aren’t a sausage fan, you can swap out ground beef, ground pork or even cut up hot dogs! How much fun would that be? Your kids might not want anything else…

If you added some vegetables like mushrooms and celery you can even make this Hot Dog Bun Stuffing Recipe vegetarian too. Just swap out the chicken broth for vegetable broth and you’ll be all set.

How Do You Make Stuffing?

The basic idea behind stuffing, or dressing recipes is you have to have some sort of a bread base. In this case, we’re using hot dogs. But the base can be anything from cornbread to sourdough bread, even raisin bread!

Next you take the bread base of choice and combine it with some sort of a flavored liquid like chicken broth or beef broth or vegetable broth. Usually you flavor the broth with celery and onions and a few seasonings, then mix it together with the bread. 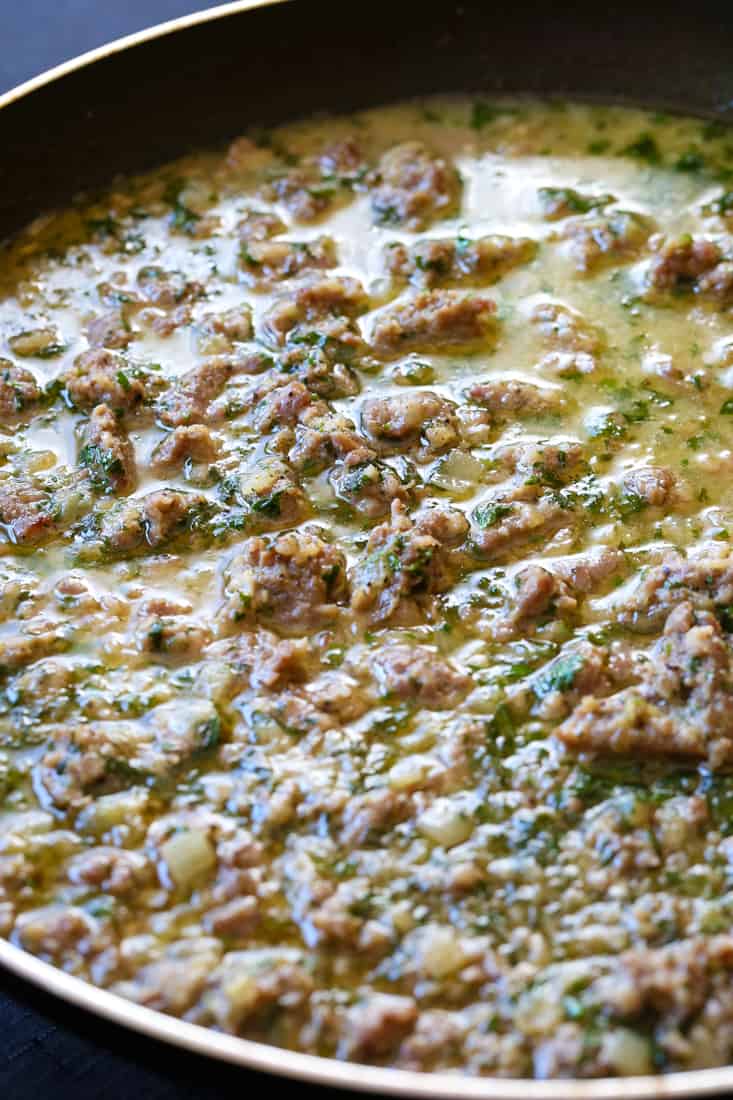 Now get your muscles ready to stir all these hot dog buns, sausage and chicken broth together. Make sure everything is mixed up well then it’s time to add in the cheese.

A couple of cups of mozzarella cheese gets mixed into this stuffing recipe for two reasons. One cheese rules. And two, it will help bind the stuffing together in the oven. 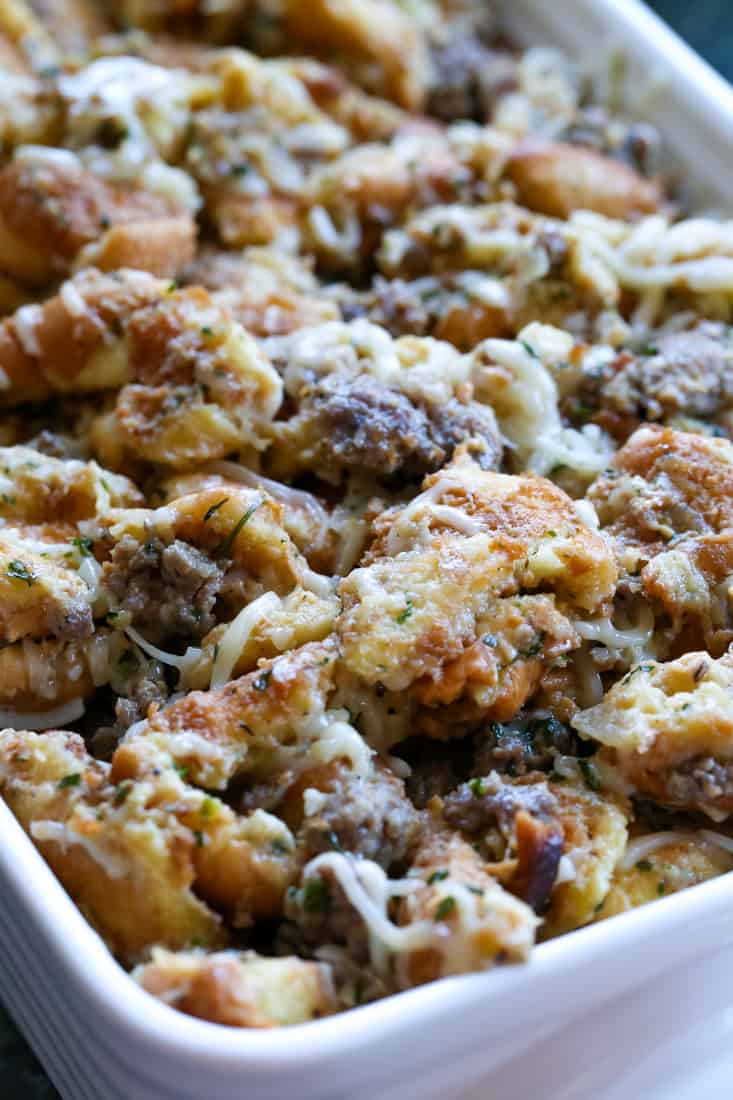 How Long Does This Stuffing Need To Cook?

Cover the casserole dish with foil and bake at 350 degrees for 30 minutes. Then remove the foil and let the stuffing cook for another 10 – 15 minutes so that it gets crispy on top.

Love that – all the crispy pieces of bread on top. Those go best covered in delicious gravy…

When this Hot Dog Bun Stuffing Recipe is finished cooking, garnish the top with chopped parsley and serve. I promise the kids are going to flip for this stuffing recipe. I know mine did. 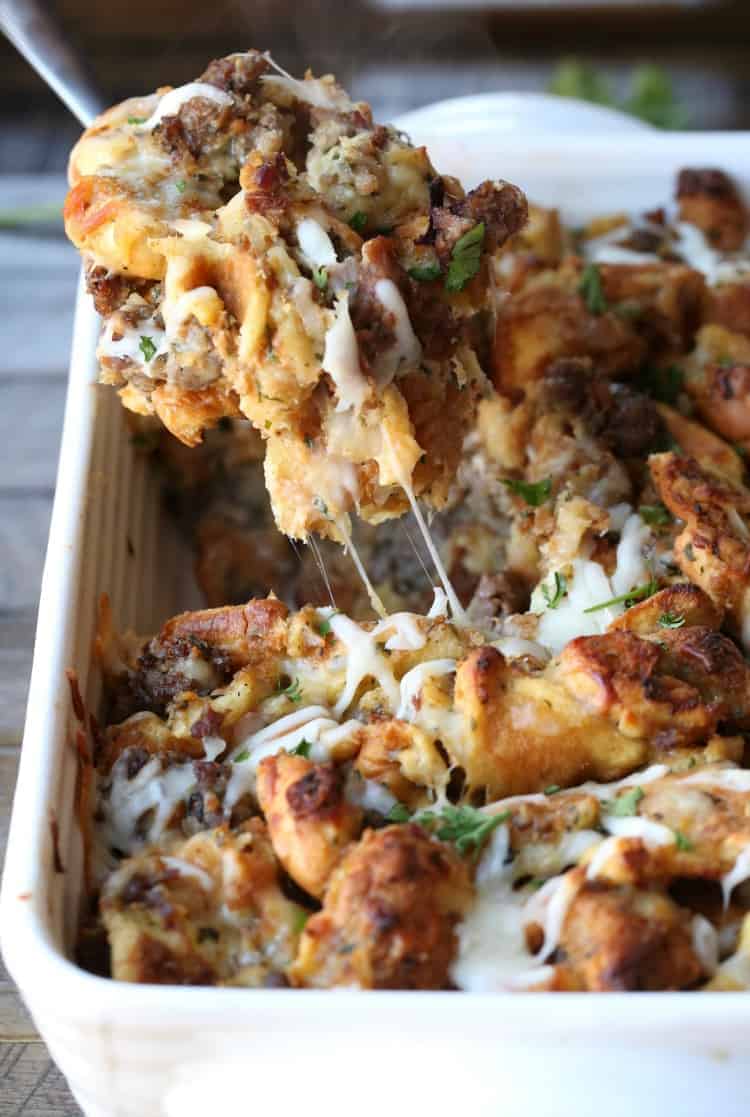 This Hot Dog Bun Stuffing Recipe is a fun twist on classic sausage stuffing. It’s easy to make and a great way to use up any leftover hot dog buns. Kids and adults alike will be digging into it, so make sure you make enough!