These Guinness Beer Nuts are coated with a sweet beer glaze then tossed with pieces of smoky bacon. Perfect for snacking on with a beer!

We love cooking with Guinness Beer because it’s adds such a rich, deep flavor to the food! Check out our Guinness Beef Shepherd’s Pie and these tender, Braised Guinness Lamb Chops! 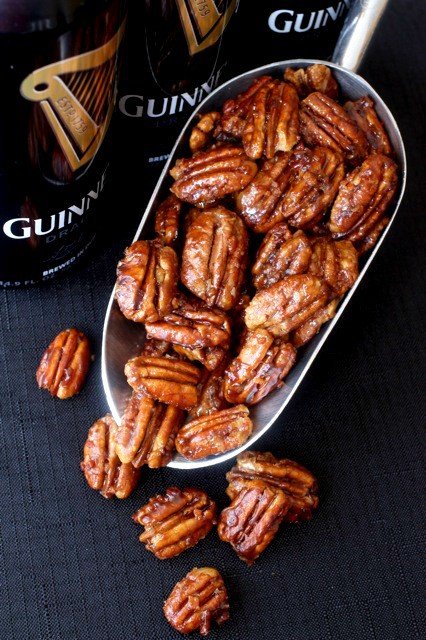 A Glazed Nut Recipe With A Kick

How about Guinness Beer Nuts for a St. Patrick’s Day snack! Sometimes I think of a recipe to make and lots of changes need to be made along the way. Eventually the end result is what I was looking for, it just took me longer to get there.

Not these Guinness Beer Nuts. I knew what I wanted to do and did it. First time was a winner and by winner I mean awesome.

I chose pecans to use in this recipe because they’re sweet and thought they would go together nicely with the Guinness beer glaze I was going to coat them with. The bacon was an after thought and thank god I thought it because it really makes these beer nuts over the top good.

How To Make These Guinness Beer Nuts

First you need to cook the bacon. When it’s done cooking save about 2 tablespoons of the bacon grease…hang on and you’ll see why.

While the bacon is cooking you can make the glaze. 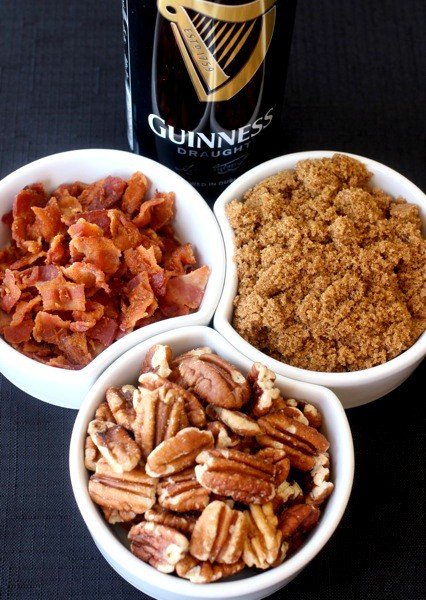 Beer, brown sugar and a little salt AND the bacon grease. Just put it in – trust me. Let that cook down for 20 minutes until it gets thickened.

Chop up the bacon strips into very small pieces and add it into the glaze. The size of the bacon pieces matters to me, but chop it up as big as you like. I wanted it to almost melt into the glaze and coat everything instead of a big chunk sticking to the nuts.

Toss the pecans together with the glaze and spread them on a parchment lined baking sheet. 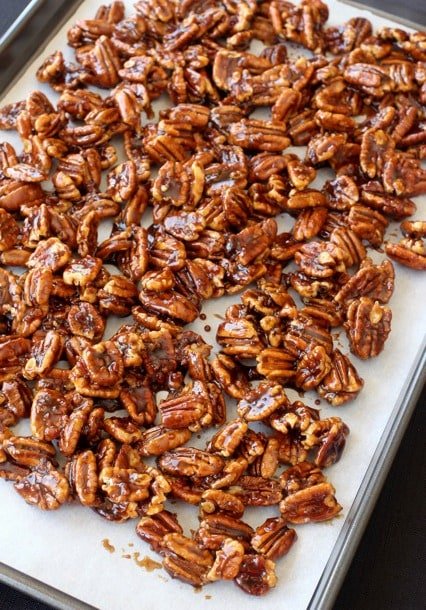 Bake at 350º for 20 minutes and let cool for 10 minutes. Break the nuts up into pieces and store in an air-tight container for up to a week. You CAN store them for up to a week – but I promise you they won’t last that long.

Make a batch or two of these Guinness Beer nuts with some appetizers and you have yourself a party. Just tell someone else to grab more beer! 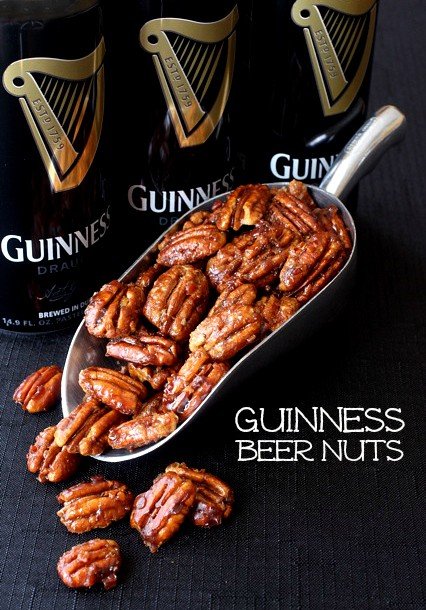 These addicting glazed pecans are perfect for snacking on with your favorite beer!