Bratwurst with Peppers and Onions are a classic summer time dinner! Juicy, grilled brats with a beer, peppers and onions topping! 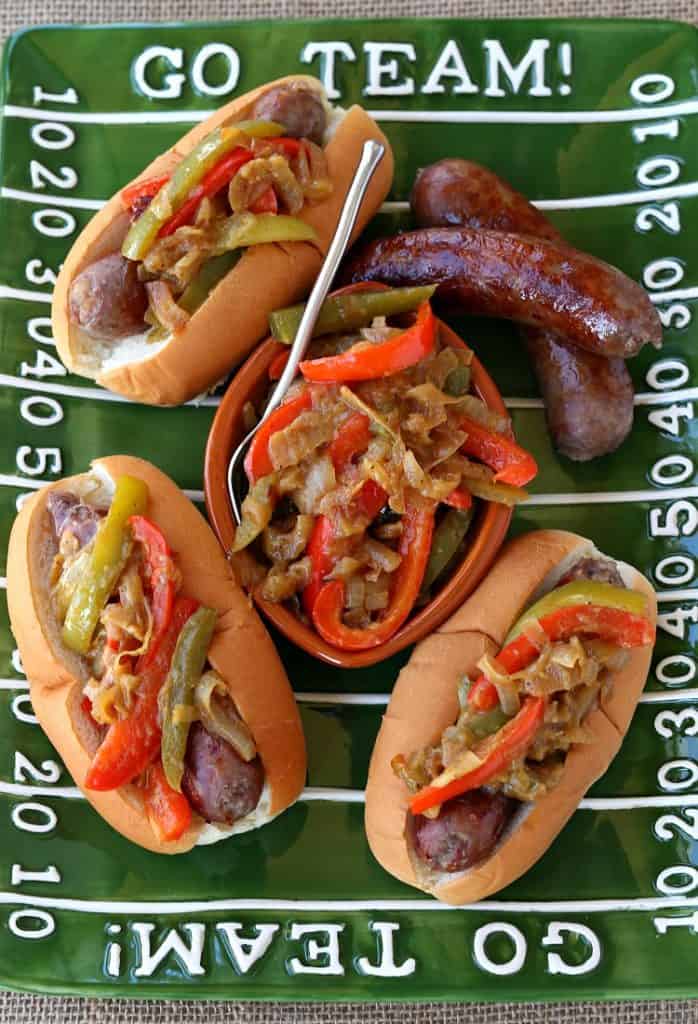 Bring on the brats! Bratwurst was big for me growing up. Coming from the midwest, brats were a big part of a lot of people’s lives. Most summer parties, BBQ’s or holidays had bratwurst on the menu.

This grilled bratwurst recipe has a delicious peppers and onion topping that’s cooked down with a splash of beer. Stir in a spoonful of grainy mustard to finish it off and you’ve got the best tasting brat around. 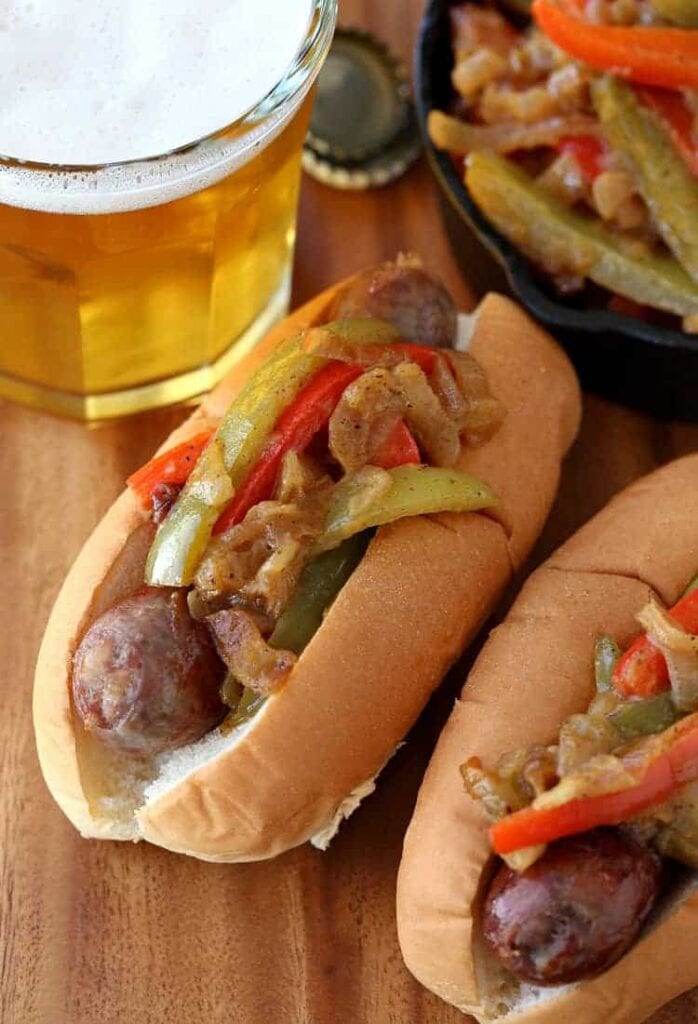 Can I Make The Peppers & Onions Topping Ahead Of Time?

Absolutely! This bratwurst recipe is perfect for entertaining at BBQ’s or just an easy dinner recipe for hanging out at home.

The pepper and onion topping can be made a day or two ahead of time and keep it in the refrigerator until you’re ready for the grill! You can then warm up the topping over low heat in a small pot or throw it in the microwave.

How Do You Make This Bratwurst Recipe?

Really, these brats are all about the topping. Tons of onions and peppers cook down with the beer and mustard making this sandwich topping one of my absolute favorites.

Grab a large skillet and add sliced bell peppers and onions. Cook for about 15 minutes until the vegetables have softened significantly. 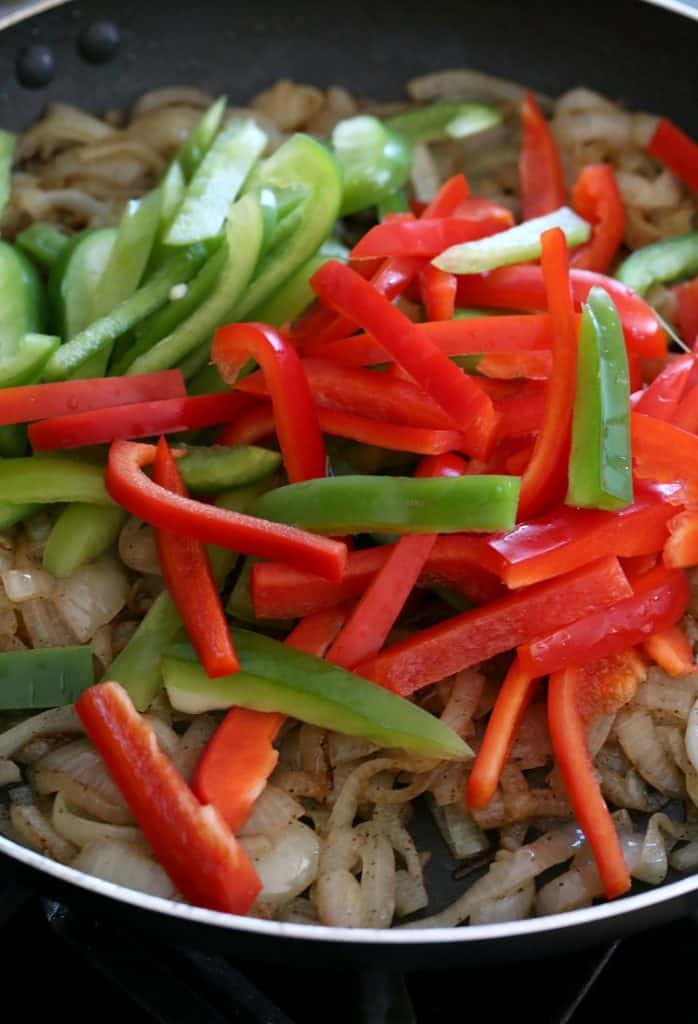 Now, carefully pour in the beer, stir and let simmer for 5 minutes until the beer is mostly evaporated. Stir in brown mustard and keep warm until ready to serve.

But don’t save this topping for just grilled sausages, either! Pile it on burgers, grilled chicken and hot dogs too. We even use it as a quesadilla filling with either chicken or beef and our kids go crazy for it!

What Kind Of Beer Should I Use For Brats?

Unlike other recipes that cook the bratwurst in beer, we’re adding the beer to the peppers and onions topping. Honestly, you can use any beer that you like or have on hand for this recipe.

A lager or pilsner will work great, a darker beer like a Guinness would be delicious, too! Using something that you prefer the taste of is really the key for this peppers and onions topping.

However, if you aren’t a beer drinker you can leave the beer out and use chicken broth instead. 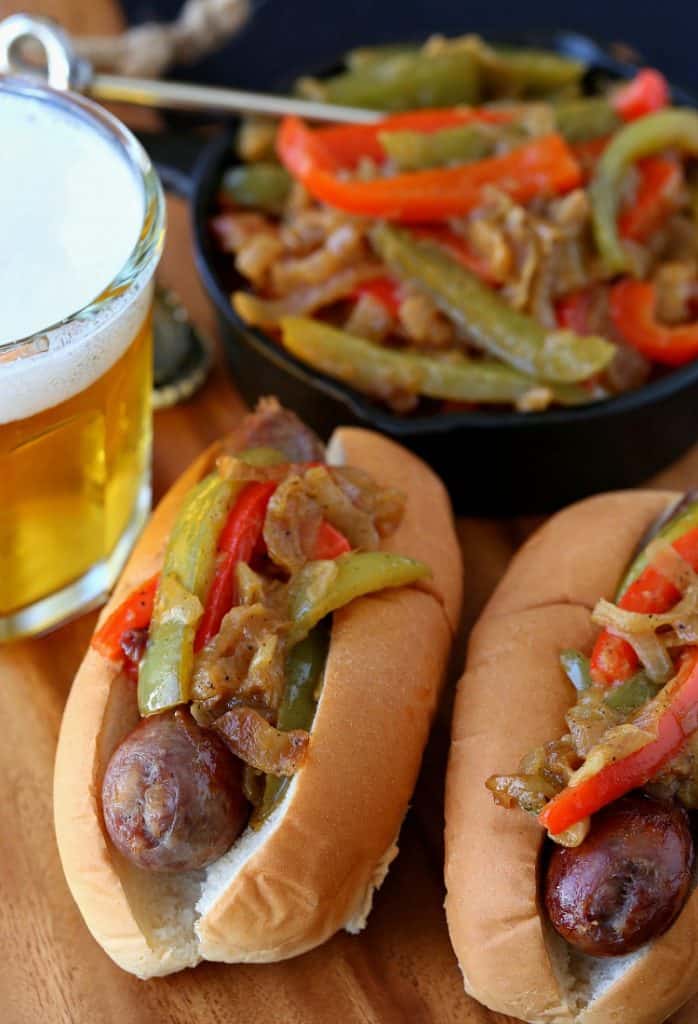 How Do You Grill Bratwurst?

A lot of recipes call for par-boiling or pre-cooking the bratwurst first. For this Bratwurst with Peppers and Onions recipe, we’re just throwing them right on the grill. Cook the brats for about 4-5 minutes on each side.

Bratwurst are cooked when the middle of the sausage reads 160 degrees. You can also slice into the brats to make sure that the center isn’t pink. See some pink? Leave the brats on the grill for a minute or two longer. 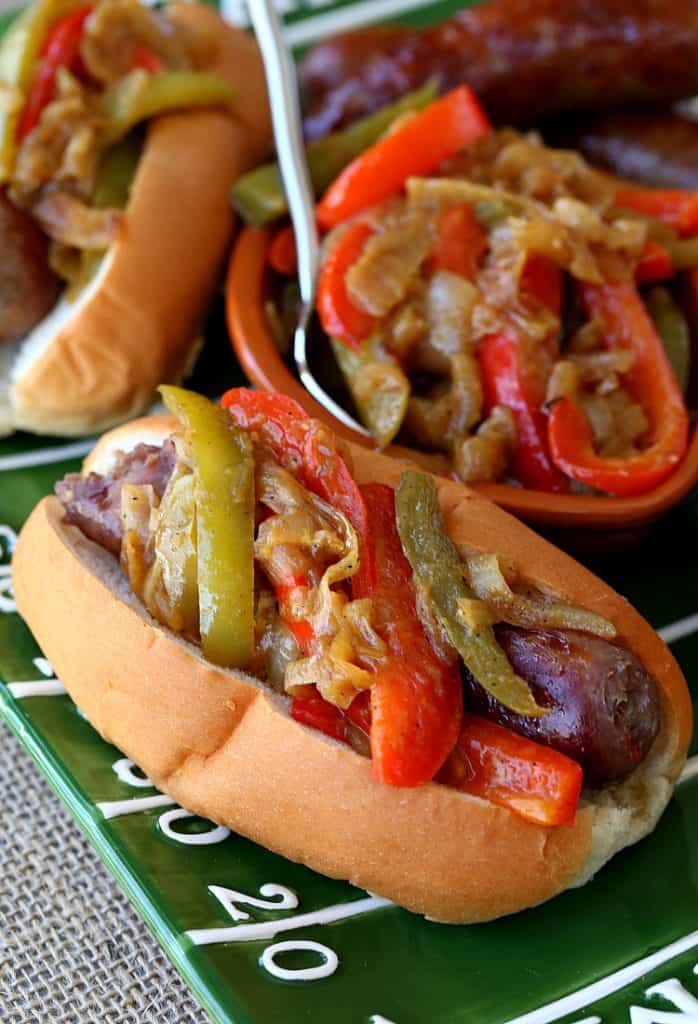 What Sides Can I Serve With Bratwurst?

I kind of feel like anything goes with brats! We love them so much we’re not too picky about what’s on the side, but here are a few of our favorites!

For the Onion and Pepper Topping

This is a sponsored conversation written by me on behalf of Johsonville®. All opinions here are mine.