Comforting Chicken Philly Cheesesteak Spaghetti Casserole is a family favorite. This hearty spaghetti casserole is budget friendly and will feed a crowd! 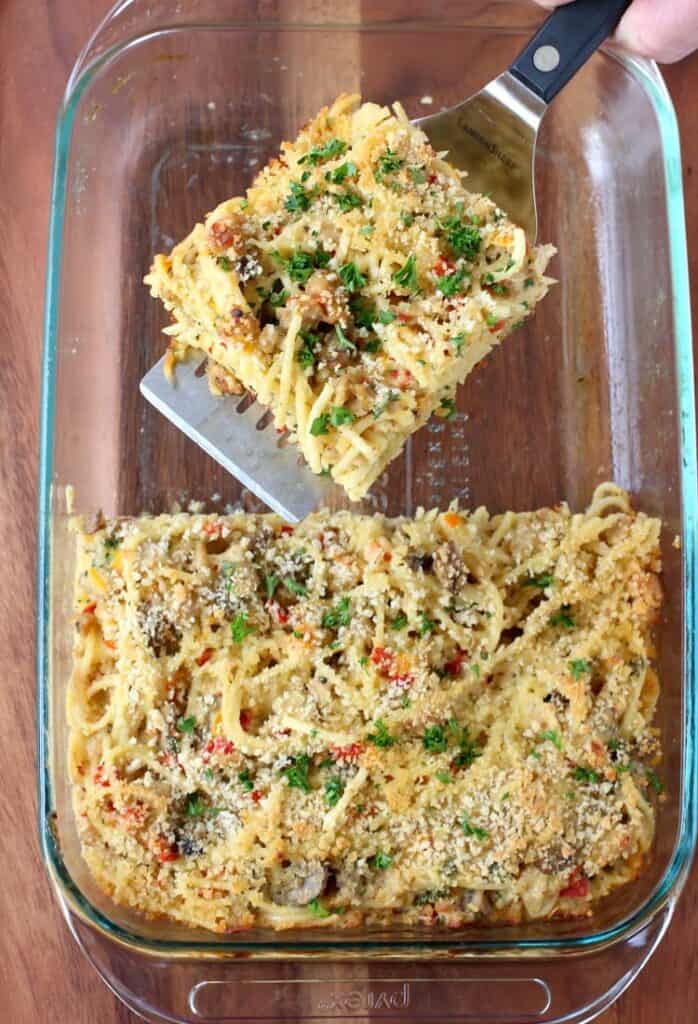 We all need those tried and true recipes that we keep in our back pocket for tines when you need to feed a crowd! This Chicken Philly Cheesesteak Spaghetti Casserole is definitely one of ours!

It’s super comforting, filling and ridiculously delicious. We packed this spaghetti casserole full of ground chicken, mushrooms and peppers baked in a creamy alfredo sauce. Grab a couple of jars of your favorite alfredo sauce at the store to make this dinner recipe even easier!

How Do You Make This Spaghetti Casserole?

In case you aren’t familiar, a spaghetti casserole is sort of like a lasagna, but made with spaghetti. It cuts and serves like a lasagna because it’s usually held together with a binder of some sort. For this recipe we used an egg, just like you would add to your ricotta cheese mixture in a lasagna.

Start by making the filling in a large skillet. The biggest on you have! We cooked ours in a 13 inch skillet so if you don’t have one that big you might have to cook the chicken in batches.

After the chicken is browned, cook the peppers, onions and mushrooms in the same skillet. We found that removing the cooked chicken from the skillet makes this step easier, especially if you don’t have a large pan. 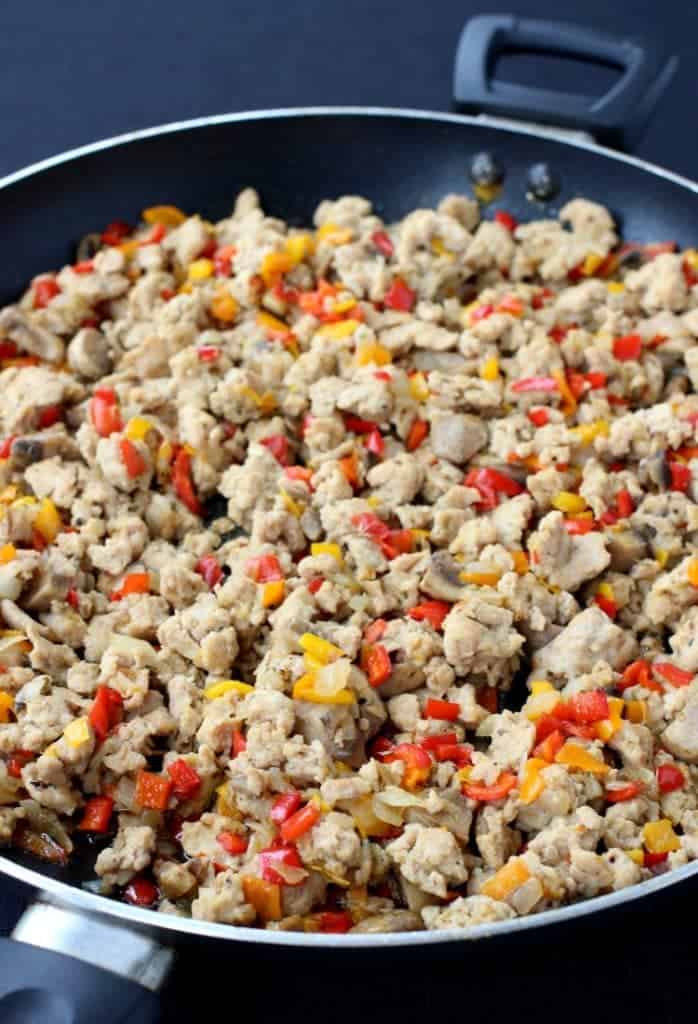 While the chicken and vegetables are cooking, boil 1 pound of spaghetti a minute or two shy of the package directions. The spaghetti will cook loner in the oven so you don’t want it cooked all the way through. Drain the spaghetti and return it to the pot. Add store bought alfredo sauce and toss together.

Once the ground chicken and vegetables are done, add them to the pot with the spaghetti and the beaten egg. Mix again to combine and then pour into a 9″ x 13″ baking dish. Top the casserole with breadcrumbs, cover and bake. 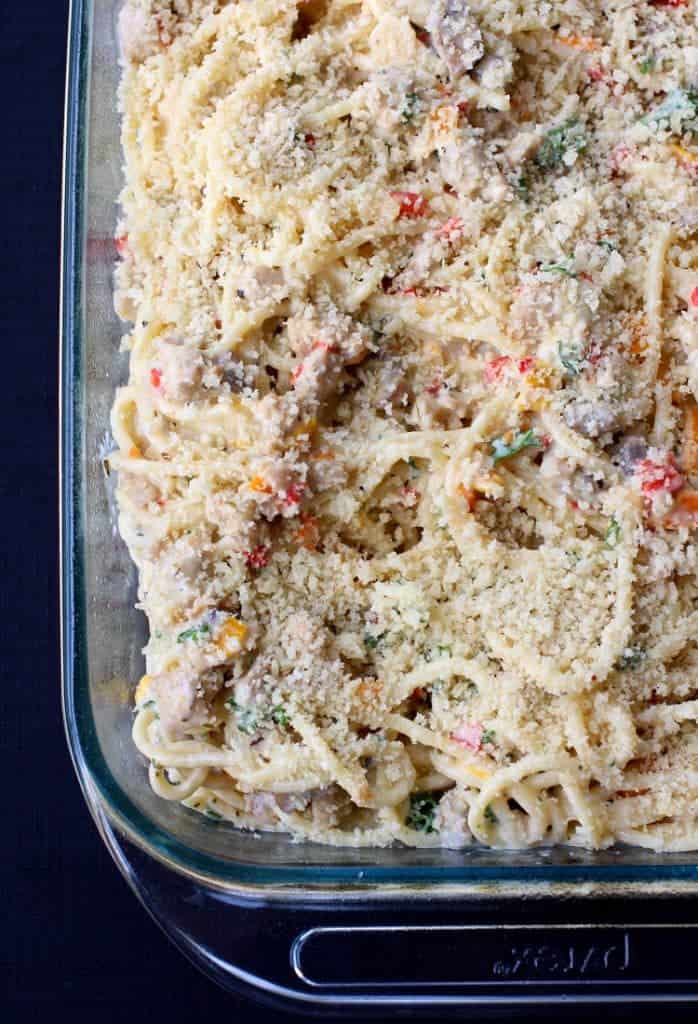 After 25 minutes, remove the foil from the baking dish and bake another 10 minutes to brown the breadcrumbs on top. Remove the spaghetti casserole from the oven and let it rest for 10 minutes before cutting.

Can I Make This Chicken Philly Cheesesteak Spaghetti Casserole Ahead Of Time?

This is one of those recipes that tastes better when it first comes out of the oven. Don’t get me wrong, leftovers are AMAZING, but the spaghetti will absorb the sauce so it will be a little more dry than when it’s first baked. BUT since the spaghetti absorbs all the sauce it’s super flavorful and delicious.

But you can make this casserole recipe ahead of time, refrigerate it and bake it when you’re ready, that will save a ton of time in the kitchen! 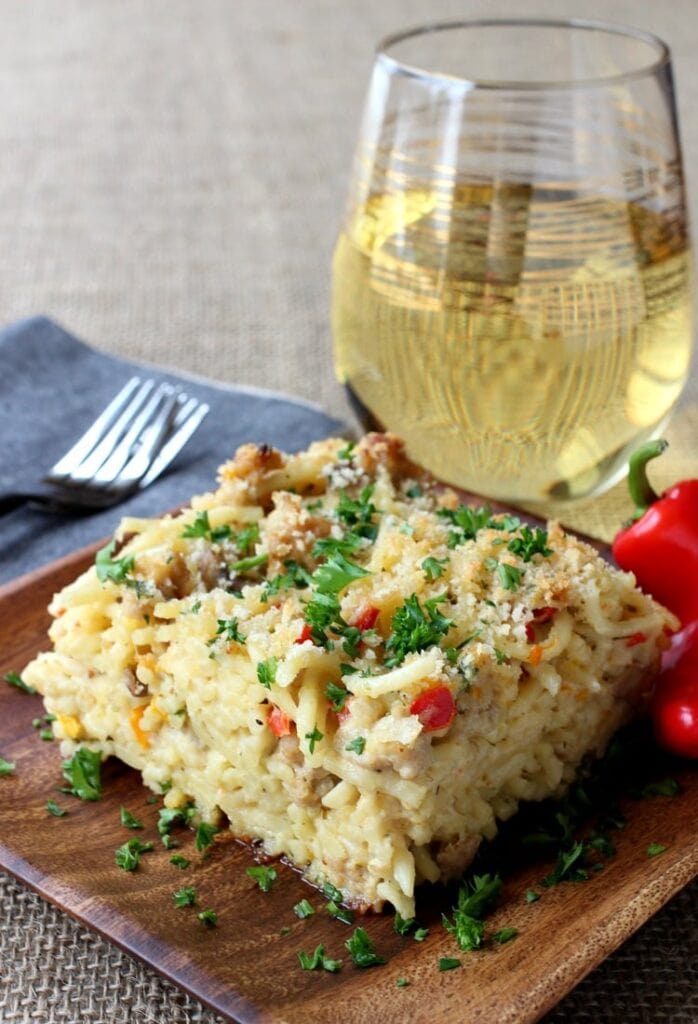 This hearty and comforting spaghetti casserole has all the flavors you love in a chicken Philly Cheesesteak!