Serve this potato side dish with a Roast Turkey for the holidays – or the star of the Christmas dinner show – Beef Wellington! Of course you don’t have to save this casserole for the holidays, we serve these potatoes with Grilled Chicken or Grilled Steak too! 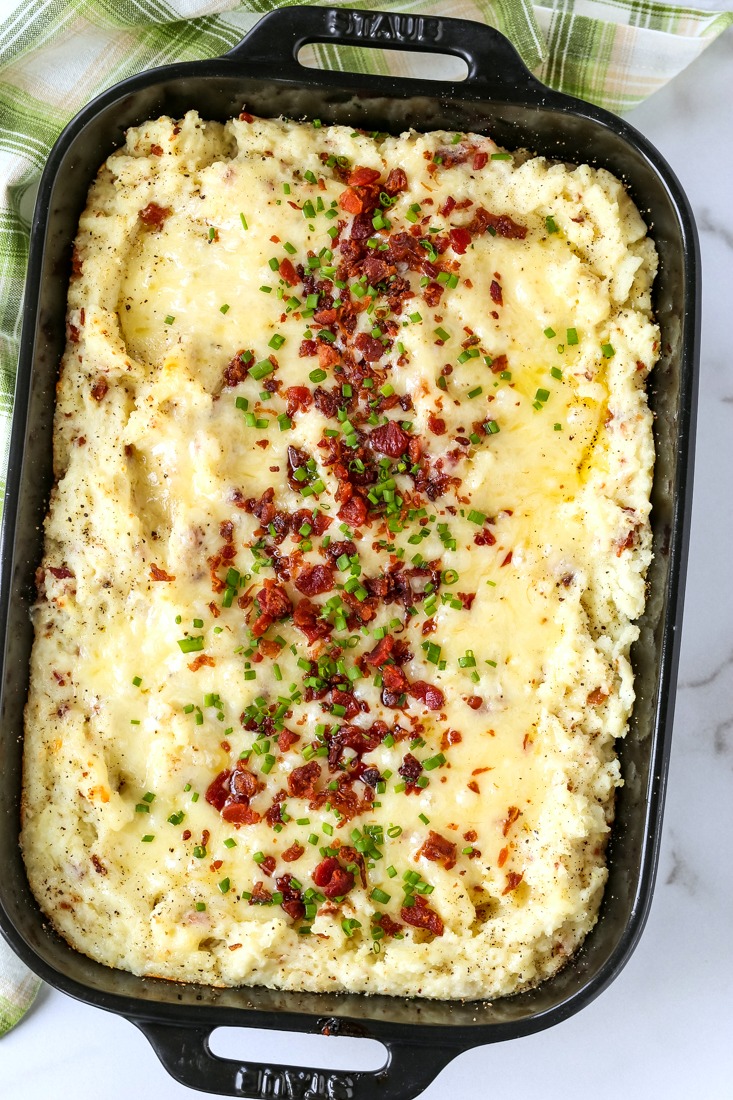 A Make Ahead Potato Casserole Recipe

Making mashed potatoes ahead of time is hard to do. You can use a slow cooker mashed potato recipe to free up oven space, but the texture can get gummy sometimes.

If you make mashed potatoes ahead of time and refrigerate them, you end up with a really hard bowl of mashed potatoes that has to be reheated with more cream and/or melted butter to loosen them up again.

This Twice Baked Potato Casserole is the best way to make mashed potatoes ahead of time with the best possible flavor and texture! You can make this potato casserole recipe even the day before, stash it in your refrigerator and bake when ready.

Perfect, fluffy, creamy potatoes every single time! This recipe is also perfect to take along to potlucks or dinner parties or to give to a friend or family member who needs a hug in a casserole dish. 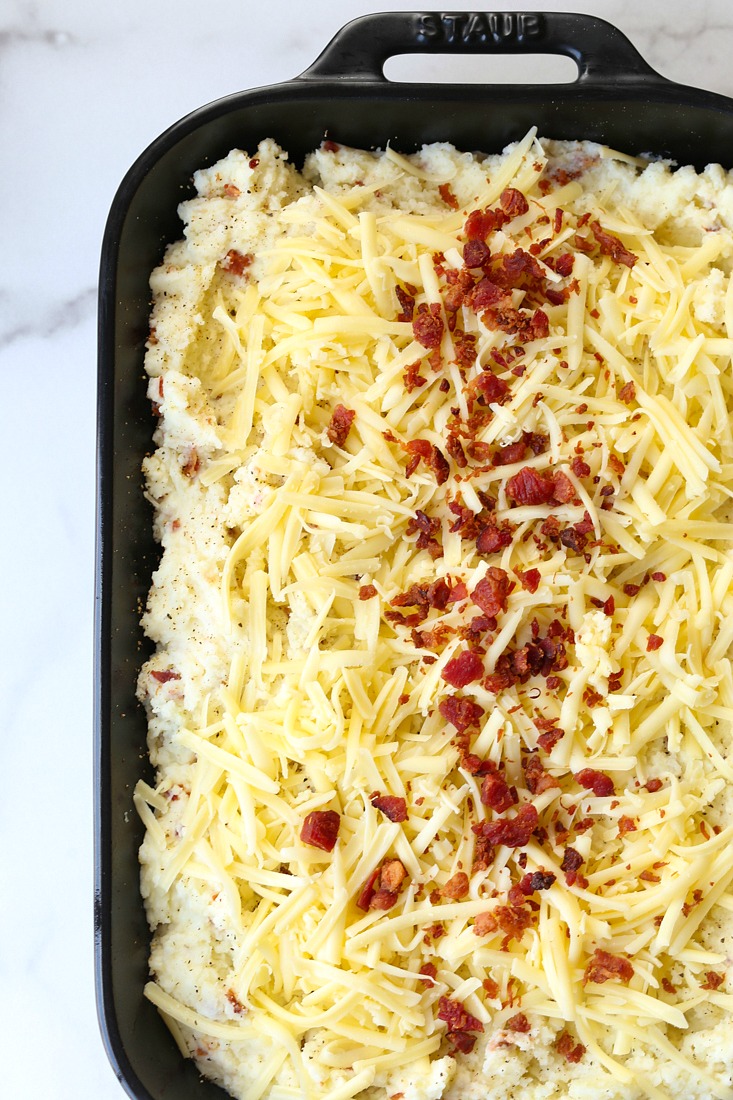 What Kind Of Potatoes Do You Use To Make This Casserole Recipe?

Russet potatoes are best since they will yield the fluffiest potato filling. You can use a Yukon Gold if you prefer but the potatoes will be more creamy instead of fluffy. Still delicious, it’s just what you prefer. I love the way the potatoes in this casserole are so fluffy and light, even though they are mixed with sour cream, cream cheese and yes, a whole stick of butter!

Yep, you heard me. A stick of butter. First of all, this recipe uses 5 pounds of potatoes. That’s like a whole bag that you pick up at the grocery store…and it feeds at least 10 people. These twice baked potatoes are super rich so a big scoop is all you really need. 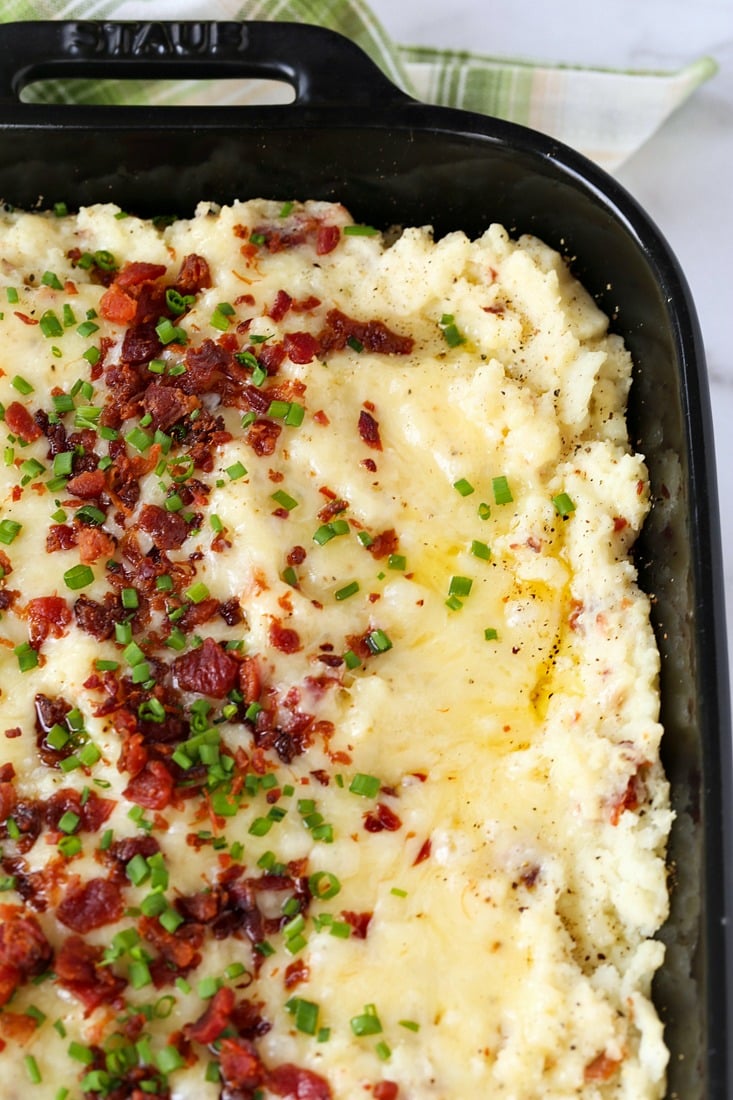 Which Is Better, A Potato Rice Or A Potato Masher?

Neither are better, really. Again, it’s about what you prefer. A potato ricer will break down the potatoes into small, thin strands that literally melt together after only a few stirs. Using a potato rice will yield the smoothest, fluffiest potato filling. But that’s not to say that there’s not a place for a potato masher.

If you like more texture to your mashed potatoes then a potato masher is the right tool for you! Mashing the potatoes will leave a few pieces of potato in tact, so this will make for a more textured filling. 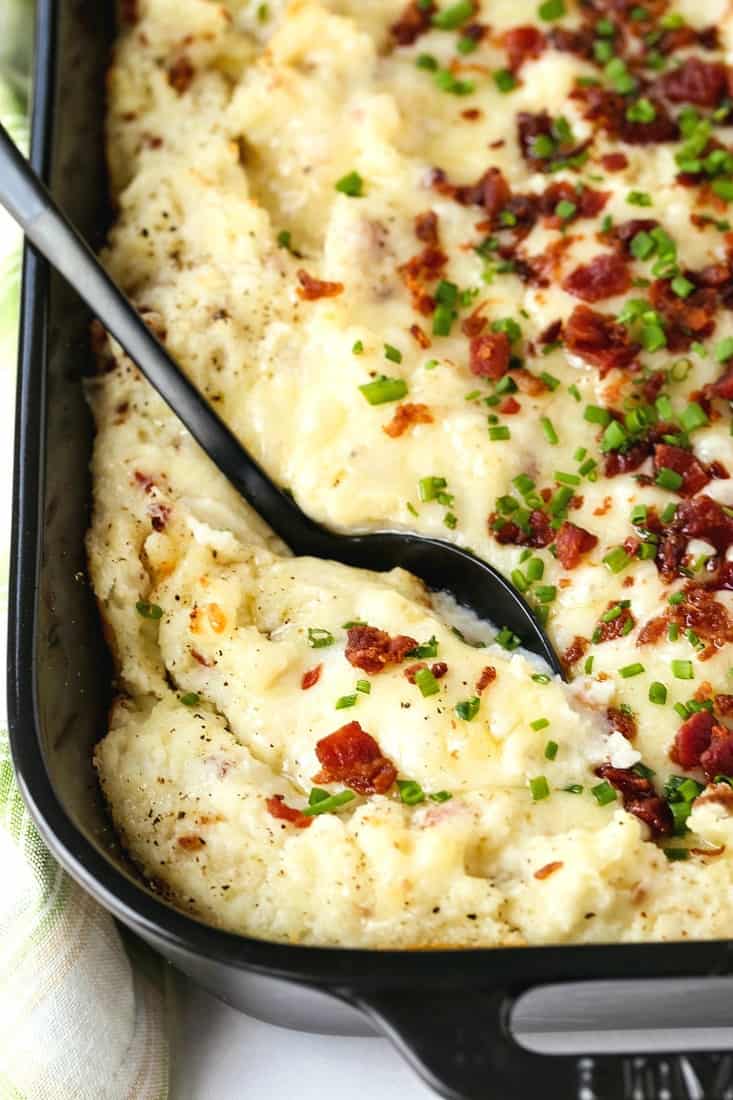 Once you have the potato filling in your casserole dish, you’re going to top it with lots of sharp cheddar cheese and bacon. We love using “real” bacon bits from the store in recipes like this because it’s SO much easier than cooking bacon.

Make sure you do get good quality REAL bacon bits though, the ground up bacon product stuff is not going to be so delicious on this delectable potato casserole. 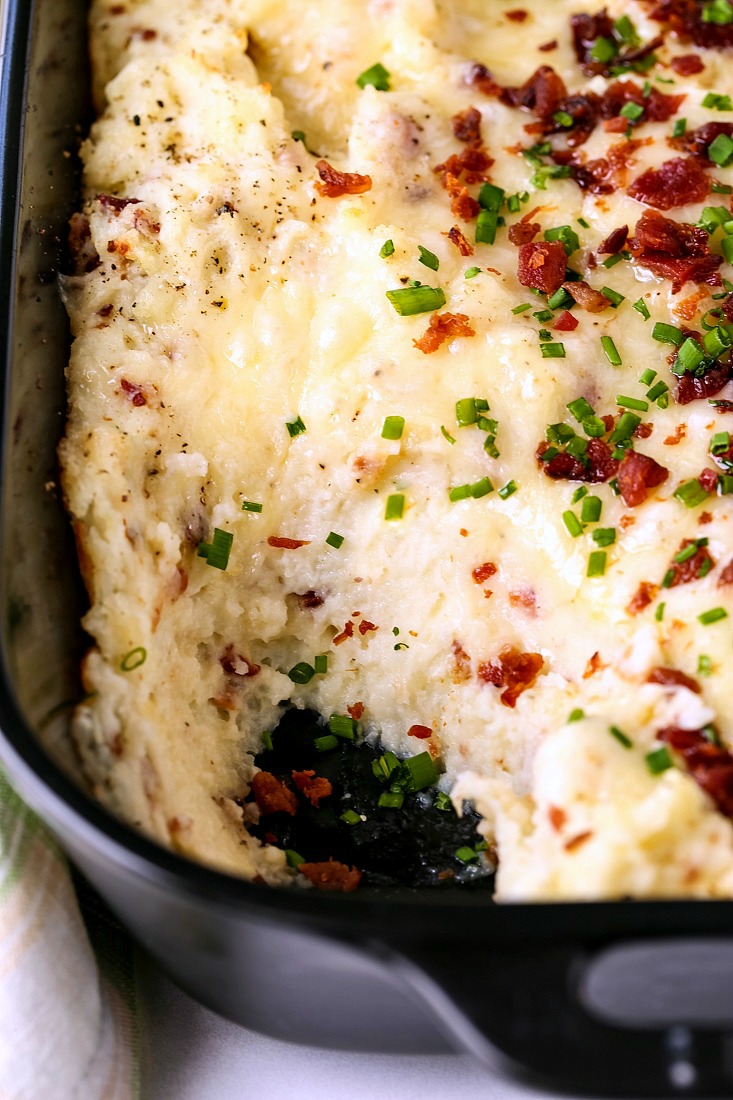 Check out how crazy light and fluffy those potatoes are!!! Look inside that scoop! I know I’ve used the word “fluffy” about ten times in this Twice Baked Potato Casserole recipe but there’s no other word to describe these potatoes. 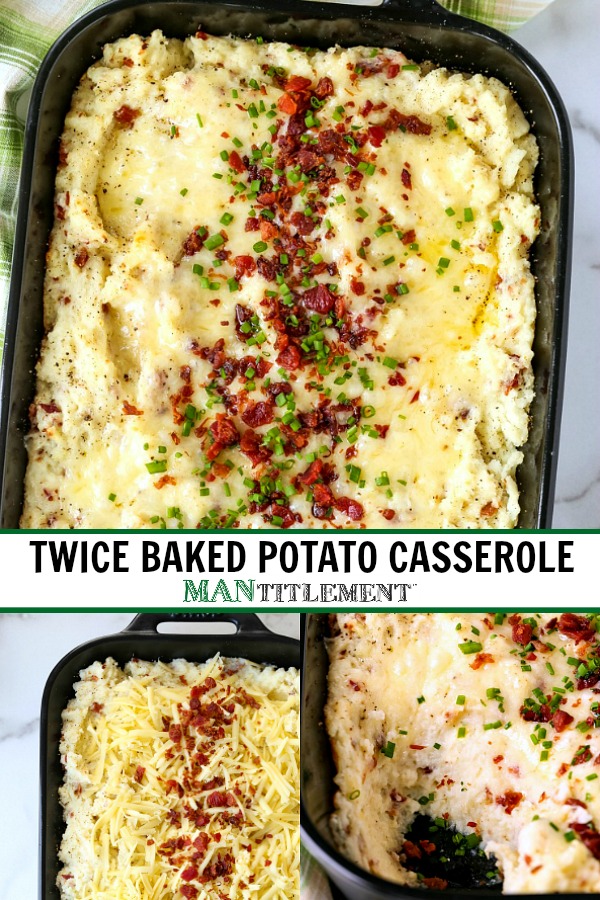 To make this potato casserole ahead of time just, cover, refrigerate and bake when ready! Take the dish out of the refrigerator about 30 minutes before baking to take the chill off, or add a few more minutes to the baking time.