Slow Cooker Spiked Hot Apple Cider is what your Thanksgiving party needs! This easy cider cocktail is flavored with pumpkin spice, cinnamon and a splash of whiskey!

Love apple cider cocktails? We do too! Check out this Apple Cider Mimosa, perfect for brunching…or this Sparkling Fireball Apple Sangria that is always a show stopper at parties! 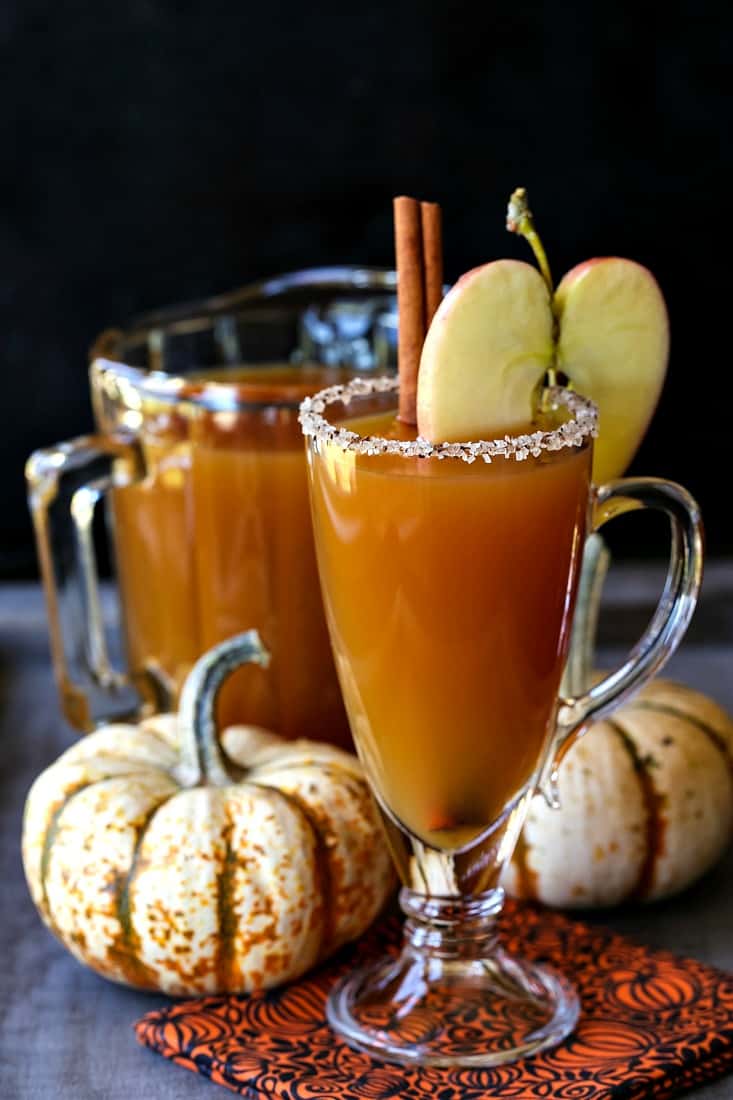 Who doesn’t love a warm, spiced mug of apple cider? Well now you can love it even more with this Slow Cooker Spiked Apple Cider recipe!

We’ve spiked this apple cider cocktail with apple whiskey and apple liquor. All the apple flavors we can get into a slow cooker drink. Then we topped it off with a shake or two of pumpkin pie spice, cinnamon sticks and some fresh apples slices.

This slow cooker drink is not only crazy delicious, but as you can see it’s crazy easy to make. So that makes this apple cider drink perfect for any type of party, it even serves itself!

You can garnish this warm cider drink with more apple slices and a cinnamon stick but it doesn’t need more than that. The flavors of the pumpkin pie spice and the whiskey mixed with crisp apple cider are just about perfect. 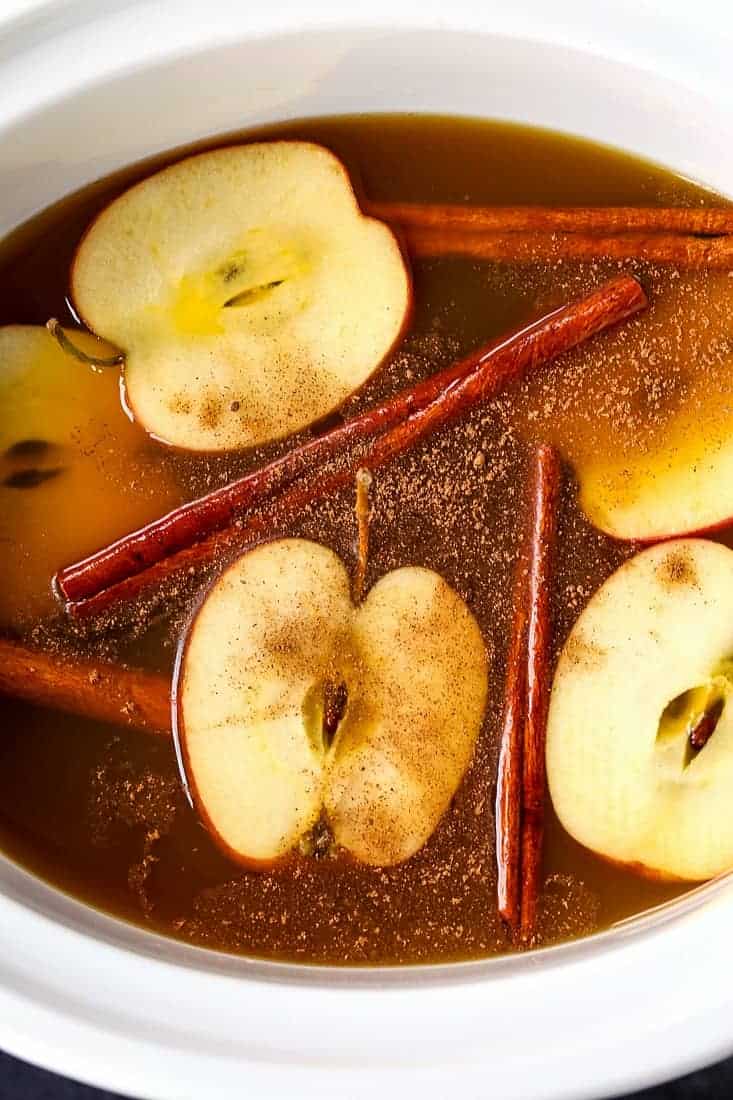 How Long Can This Cider Cocktail Stay In A Slow Cooker?

Honestly it will be fine for hours. Like, hoursssssss.

The apples might get a little soggy so you’ll want to keep fresh apples on hand for garnish but as far as the cider itself? It’ll go as long as your party goes for.

Just be sure to remove the cinnamon sticks and apples from the slow cooker and let the cider cool before you store any leftovers in the refrigerator. Not that you’ll have much of this Slow Cooker Spiked Apple Cider leftover, but if you do you’re going to want to keep it!

What Other Types Of Alcohol Go With Apple Cider?

For this recipe we used apple whiskey but there are MANY different types of alcohol that go really nicely with apple cider. It really depends on what kind of drink recipe you are making and what kind of booze you like! 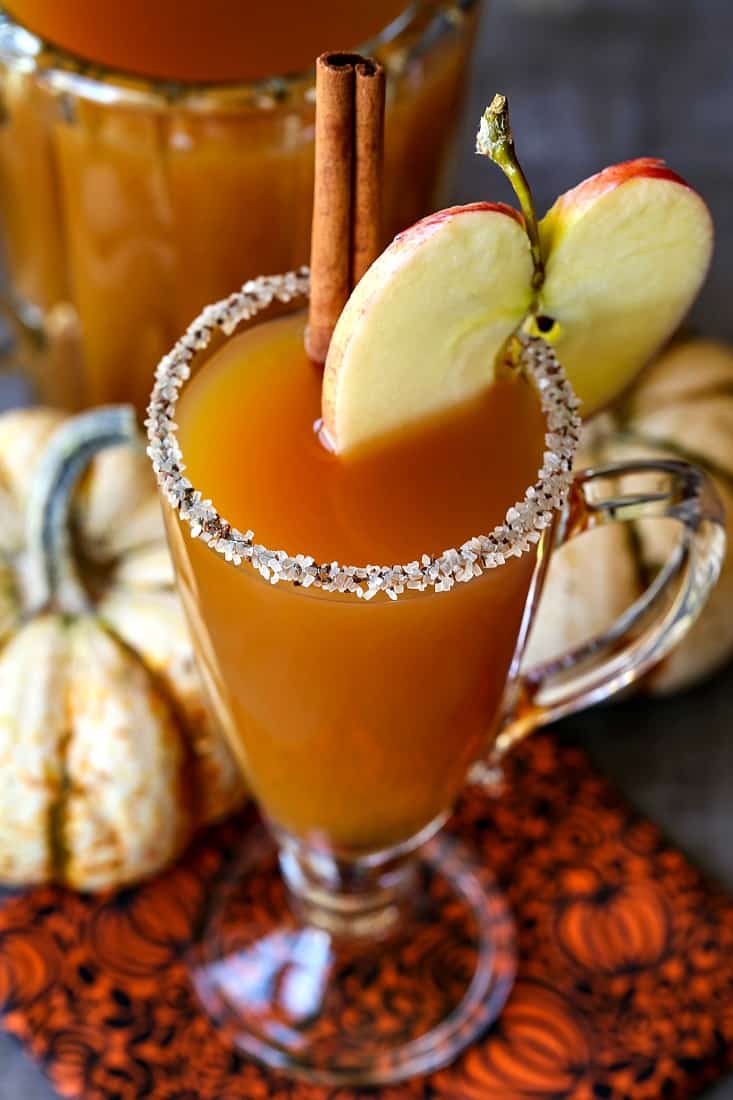 How Do You Rim A Glass With Sugar?

Now let’s talk about that cinnamon sugar rim! I used a store bought cinnamon sugar grinder because I liked the big granules of sugar. Then I cracked open the grinder and just poured it out on a plate.

Grab regular corn syrup and pour that out on another plate then you’re ready to go.

Dip the rim of your glass first into the corn syrup and then into the cinnamon sugar until you get a nice, thick rim on your glass. Definitely do this ahead of time for parties, the rim will keep pretty much until you wash it off.

Can You Double This Recipe?

Easily! Double, triple, do what you need to do as long as your crock pot is big enough to hold it! This apple cider drink is on the top of our lists for our big Halloween party we have outside every year.

People come by the dozens to our house because we live in a large neighborhood with a cul-de-sac, so that’s where the party happens. Usually we have a signature cocktail and lots of beer and wine to go around.

Next year, it’s going to be this Slow Cooker Spiked Apple Cider for SURE.

If you’re still looking for more cider cocktails, check out this Cold Spiked Apple Cider Cocktail Round Up! (A collection fo cold cider cocktails) You should definitely find what you need on that list! 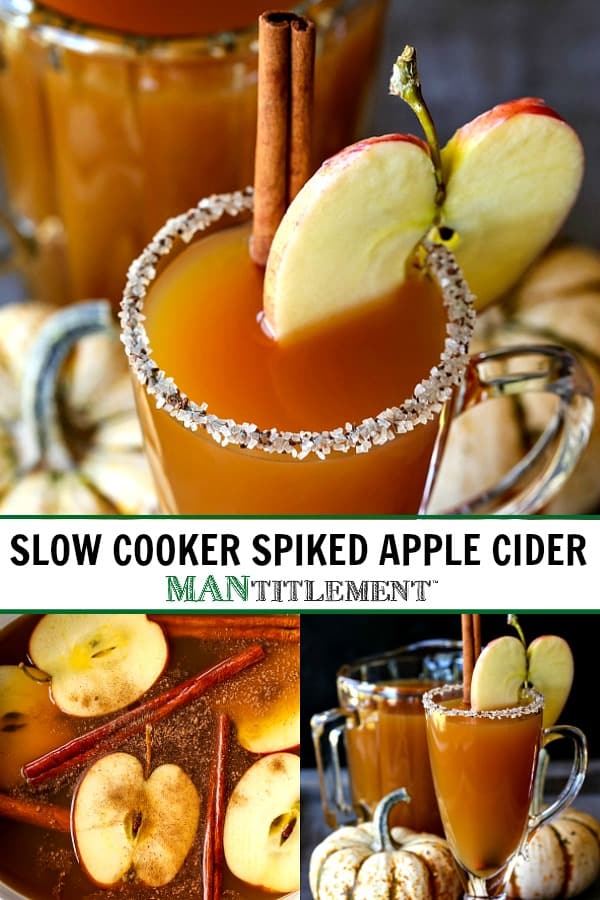 This slow cooker cider cocktail is our go to for Fall entertaining! Outside parties by a fire or cuddled up by the fireplace inside, this warm drink fits the bill!

Make a mixture of 1/4 cup white sugar to 1 tablespoon ground cinnamon. Increase the amount for the amount of glasses you need.