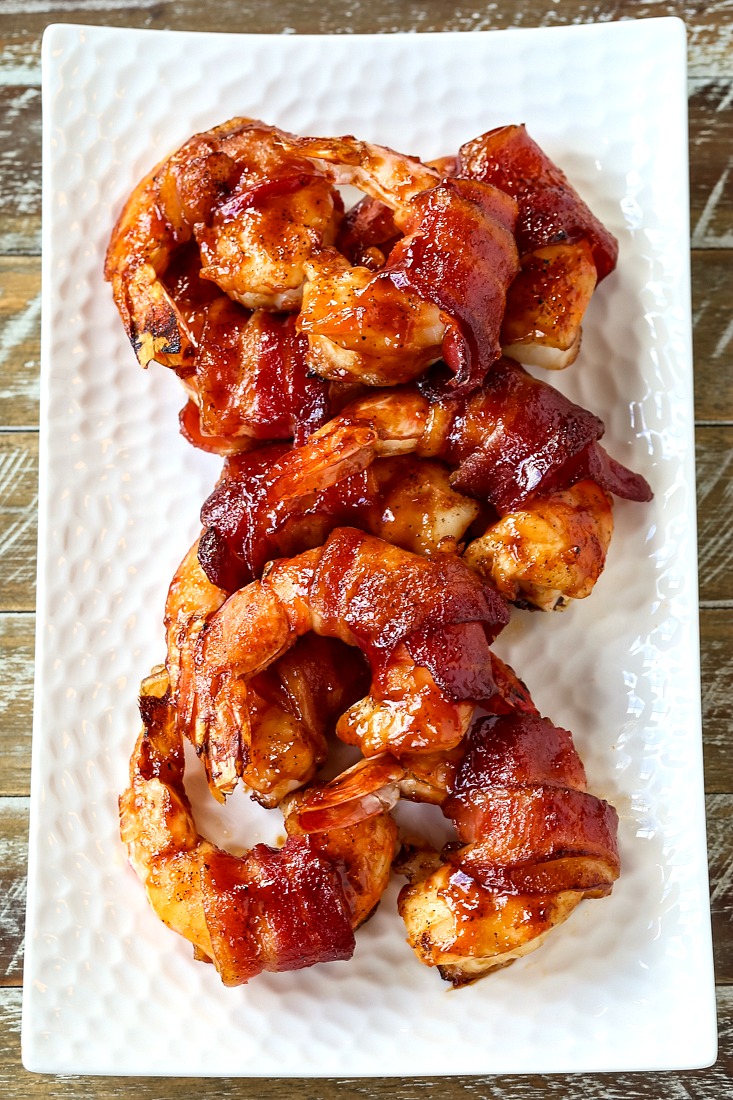 These BBQ Bacon Wrapped Shrimp work for both appetizers and dinner! This easy to make shrimp recipe is always a hit…because bacon.

I mean there’s always room for bacon! Check our our simple Bacon Wrapped Scallops too! This Bacon Shrimp Toast is an appetizer recipe that will have your friends talking for days…

Because who can decide? This BBQ Bacon Wrapped Shrimp recipe is literally so good, we make it all he damn time.

Not only is it delicious, but this is such an easy shrimp recipe to make that also is pretty show stopping, so for parties it’s always going to be a hit! The BBQ glaze that bakes on the shrimp is only a few ingredients, BBQ sauce, mustard, honey and Worcestershire sauce.

You can put that together in a minute or two while the shrimp is baking in the oven. Bake, baste, broil and done. Three easy steps to getting the most delicious bacon wrapped shrimp ever! 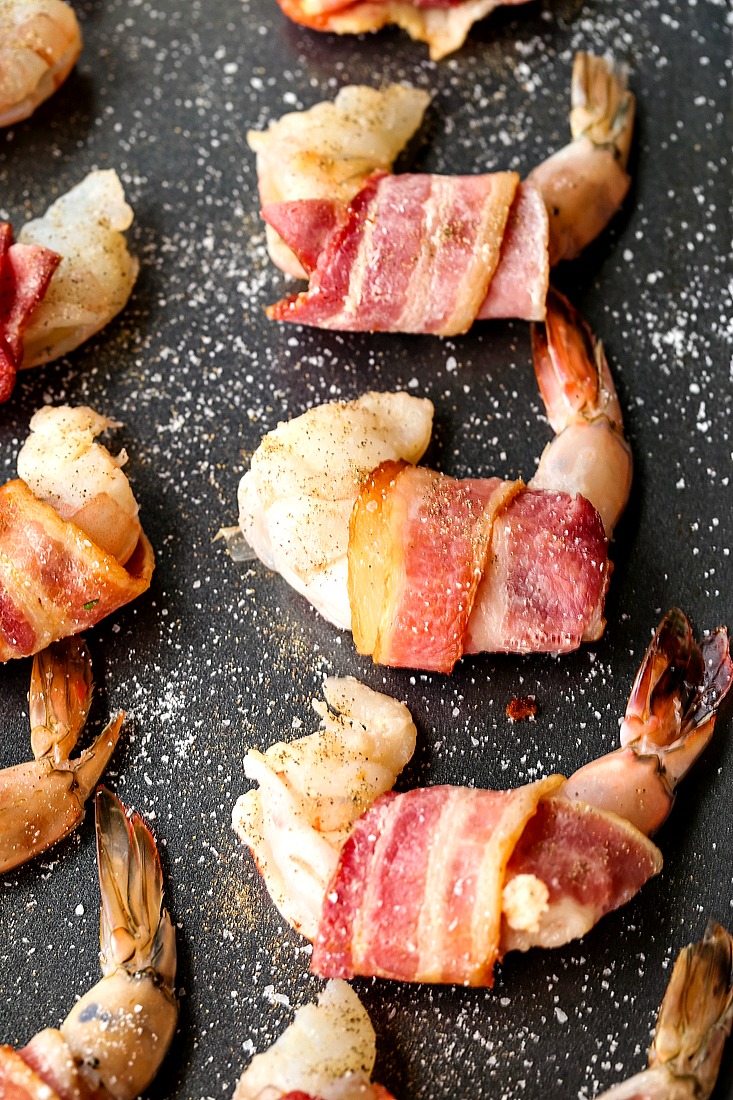 What Size Shrimp Do I Need For This Recipe?

Honestly, you can really make this recipe with most shrimp sizes, it’s just about cutting the bacon in small enough pieces. But we like to use larger shrimp for this recipe because it just looks cool and more fun.

So you’re going to want a 16-20 (meaning 16-20 shrimp per pound) or some stores might call them jumbo or colossal. Again, you can use any size but smaller shrimp will be a little more difficult to wrap the bacon around. 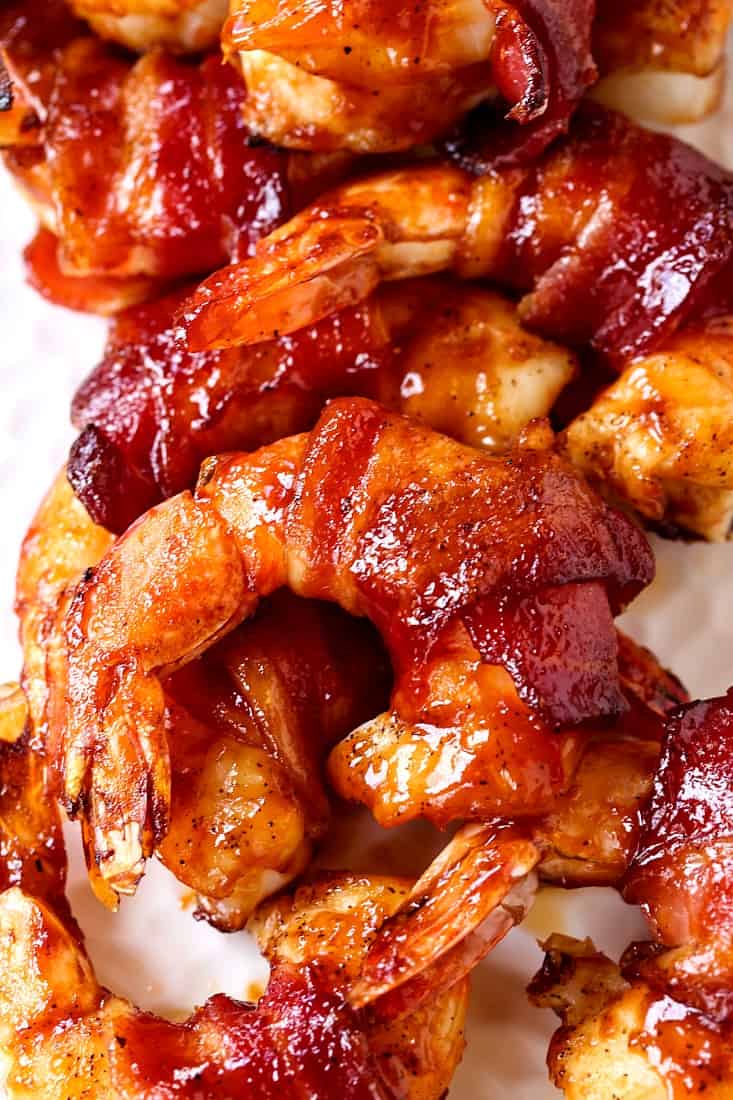 How Do You Get The Bacon Extra Crispy?

This is a trick that I use when I am wrapping most anything with bacon. You need to pre-cook the bacon, just for a few minutes to get it going. Especially when you’re talking about a shrimp recipe like these BBQ Bacon Wrapped Shrimp that only take 10-12 minutes to cook.

Pre-cook the bacon in a skillet or in the oven just for about 7-8 minutes. It will still be very flexible (which is what you want) and won’t seem cooked at all but trust me, it’s a head start.

As a result, when you go to bake the shrimp it will all be done at the same time. Pretty smart right? Rubbery, not crispy bacon is not a thing for me so getting the bacon super crispy is one of the keys to this recipe! 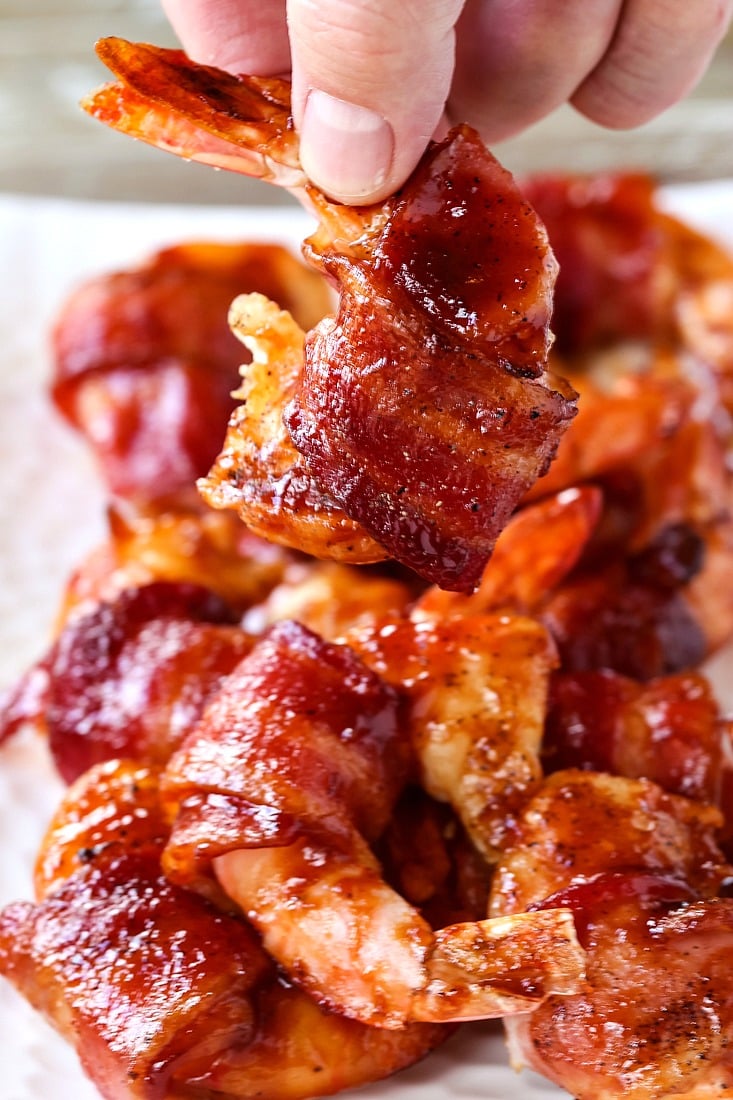 Can You Make This Bacon Wrapped Shrimp Ahead Of Time?

OK so you can MAKE this shrimp recipe ahead of time but you can’t bake it ahead of time. Pre-cook the bacon and wrap your shrimp, even make the BBQ glaze ahead of time and then store it all in your refrigerator.

All you need is about 20 minutes to bake and glaze these shrimp from start to finish so do that right before you need them. If by any chance you have leftovers you can reheat these bacon wrapped shrimp in the microwave, just try not to put them in for too long or the shrimp will get rubbery.

I highly doubt that you’ll need to worry about leftovers with this recipe, but just in case, I’ve got you covered. 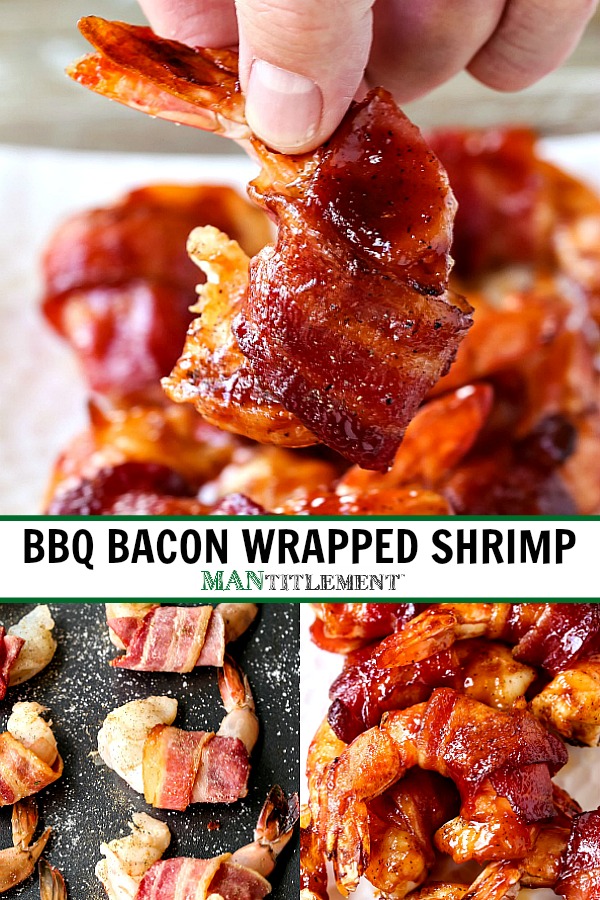 This easy bacon wrapped shrimp recipe is coated in the most addicting BBQ glaze! Serve these shrimp for appetizers or dinner!

Preheat the oven to 400 degrees. Lay the bacon on a sheet pan in a single layer and cook for 7-8 minutes. Remove the bacon from the oven and lay out on paper towels to drain.

When the bacon is cool enough to handle, cut each strip in half and wrap a piece around each shrimp. Place the shrimp on a clean baking sheet with the seam side of the bacon down.

In a bowl, mix together the BBQ sauce, honey, mustard and Worcestershire sauce.

Remove the shrimp from the oven and turn on the broiler. Brush the shrimp with the glaze one more time and broil for 3-4 minutes until the glaze is caramelized.

This recipe will serve about 6 for appetizers and 4 for dinner.