Fried Whiskey Glazed Brussels Sprouts are what my kind of side dish at Thanksgiving is all about! Sort of healthy…but NOT! This crispy brussels sprouts recipe will have everyone fighting over who gets seconds! 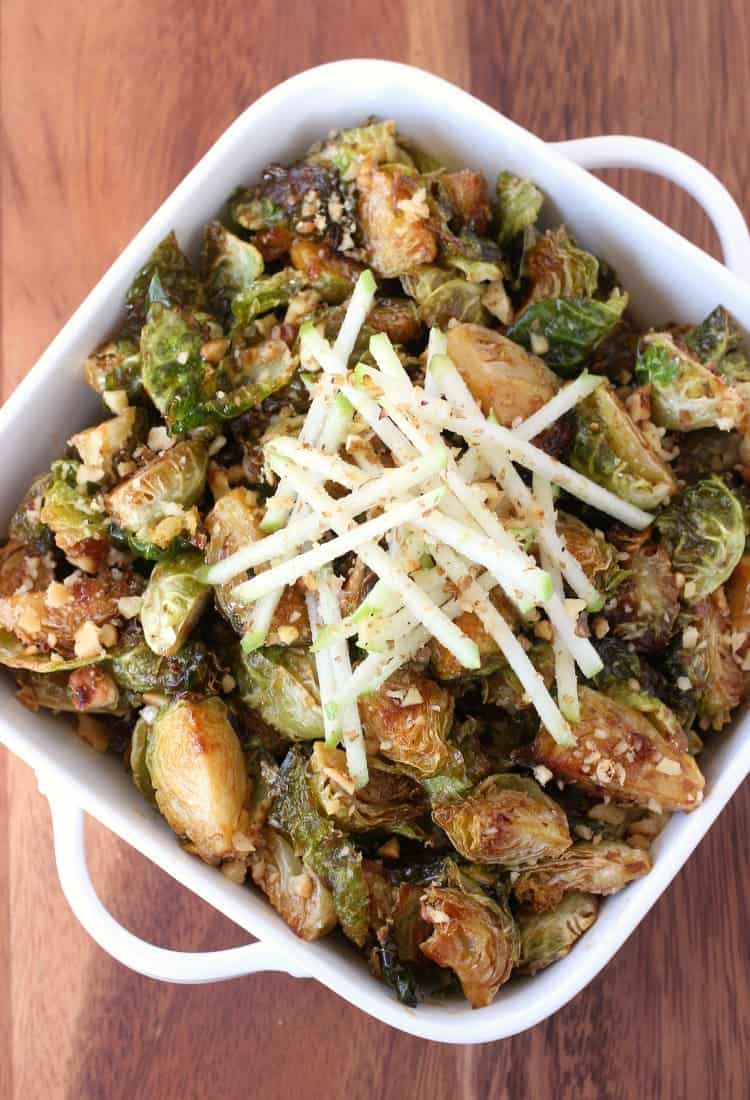 We’re not really looking for Thanksgiving to be a healthy meal around my house. We try and eat healthy-ish the rest of the year, the holidays are for splurging. When I tell you that you have to make these Fried Whiskey Glazed Brussels Sprouts – I’m not kidding. You HAVE to make these brussels.

Throw away any idea that you don’t like brussels sprouts. I was a hater too – believe me a few years ago if you told me I’d be cooking and eating brussels sprouts recipes I would have called you a liar. But it’s true. I like them. I like them a lot.

Or you can take a brussels sprout recipe and turn it into something that you don’t normally see like these buffalo sprouts, I’m also good with most things covered in buffalo sauce.

But if you just roast them naked, no fun stuff on them…I’m probably NOT good with that. My point is, you gotta make ’em fun. And I can promise you, these Fried Whiskey Glazed Brussels Sprouts are fun.

How to Make these Crispy Whiskey Glazed Brussels Sprouts

The whiskey glaze is what makes this recipe, I’ll tell you, you could coat pretty much anything in this whiskey glaze and it’ll come out awesome. This time I used Crown Royal Apple instead of regular Crown Royal and it turned out really, really good. 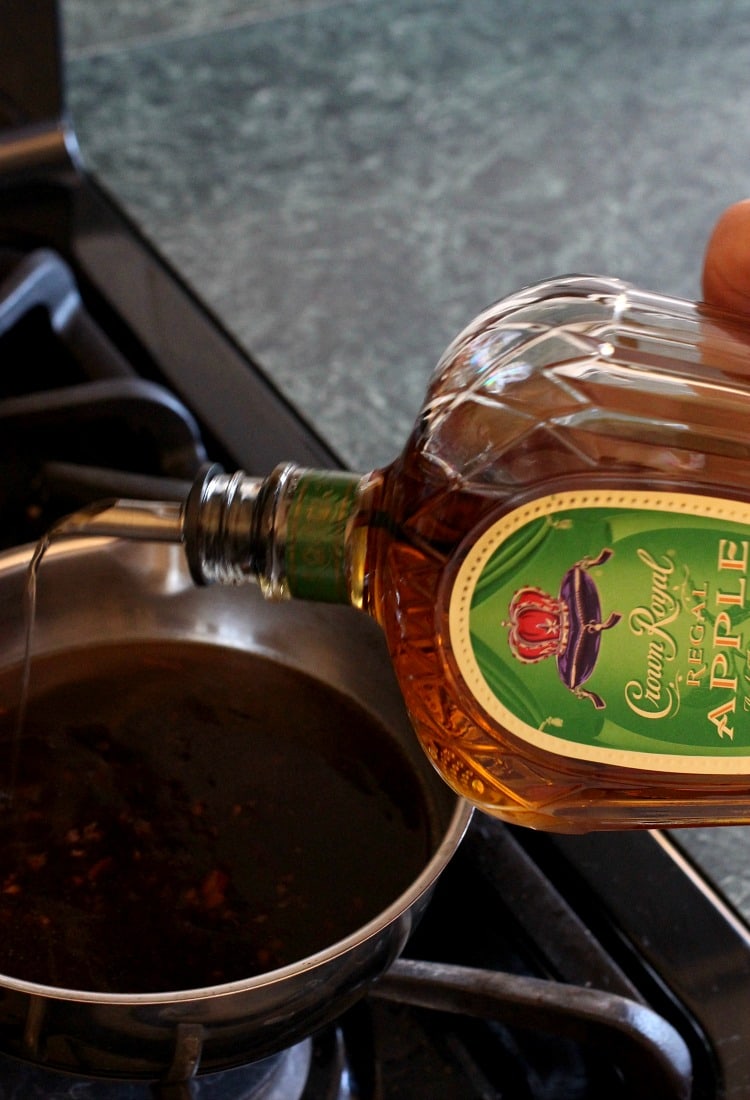 But it’s also the fact that these brussels are fried – cause everything tastes better fried – and there’s a crunchy thing going on with the walnuts and slivered apples.

Start out by heating up the oil in a deep pot. While the oil is heating up you can throw together the whiskey glaze. It’s a few ingredients but it’s a dump and cook recipe, it comes together fast.

Now start to chop up those brussels and get them ready to fry. Don’t crowd the pot or they won’t crisp up right, just take your time here.

Fry them for 3-4 minutes until crispy and browned, them onto a paper towel lined plate to drain. 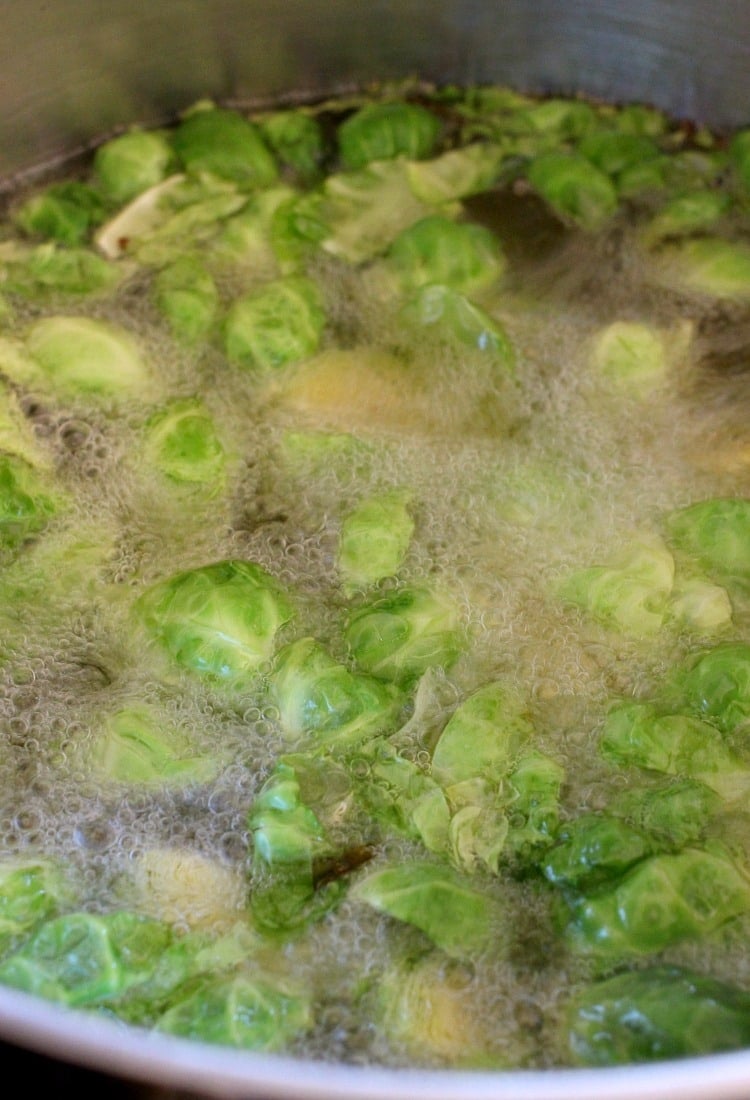 Once they are done, put them into a large bowl and toss them with the whiskey glaze. You might not need all of the glaze that the recipe makes, so add it a little at a time and stir it together.

Get them on a serving platter and top with chopped walnuts and slivered apples. And prepare for a round of applause. 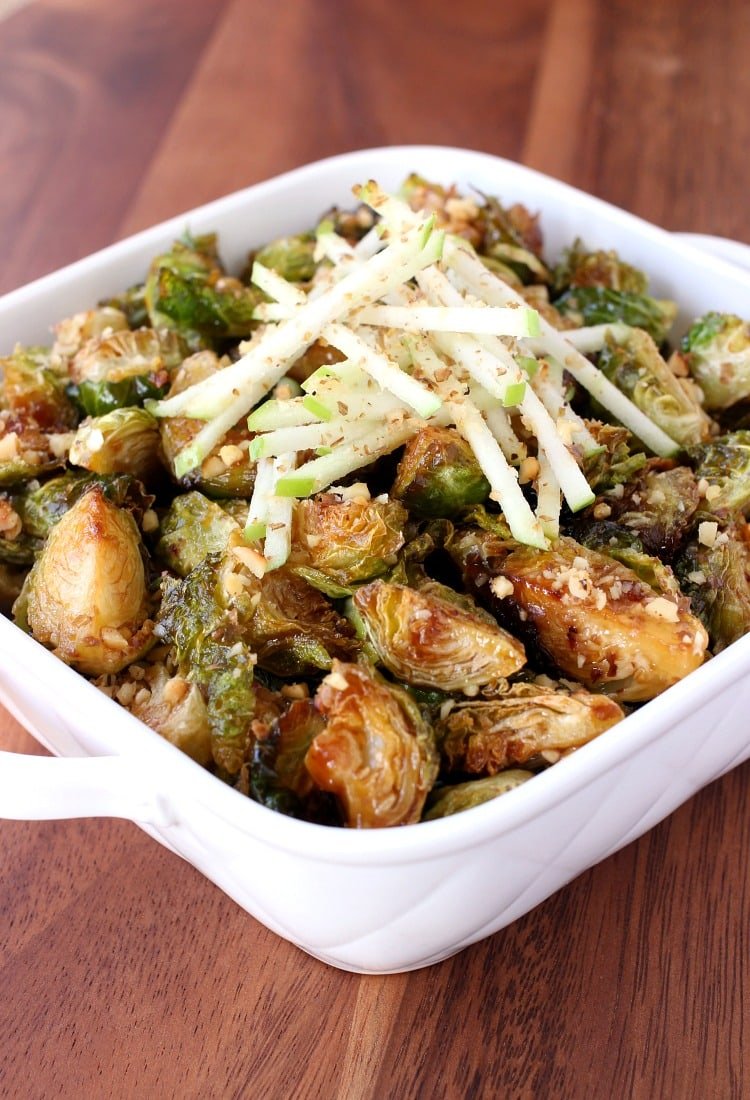 So because I’m thinking you might want to serve this at Thanksgiving, although you definitely don’t need to wait for a holiday to make these…I’m going to go over some holiday cooking tips.

This is a recipe that’s best served right away. So if it’s the one thing that you have to do at the last minute, that’s ok. It’ll be worth it, your turkey will be done, all your casseroles will be cooking in the oven…there’s not much last minute to do at Thanksgiving besides the gravy. So don’t let that turn you off making these, somethings are just worth it!

Fried Whiskey Glazed Brussels Sprouts are what my kind of side dish at Thanksgiving is all about! Sort of healthy…but NOT! This crispy brussels sprouts recipe will have everyone fighting over who gets seconds!

For the Whiskey Glaze