Grandma’s Best Stuffed Artichokes are just like Grandma used to make! Stuffed with sausage & cheese and simmered in wine until tender!

Love artichoke recipes? Try our Cheesy Stuffed Artichokes for a vegetarian version of these stuffed artichokes, or these addicting Fried Artichokes with an aioli dipping sauce! 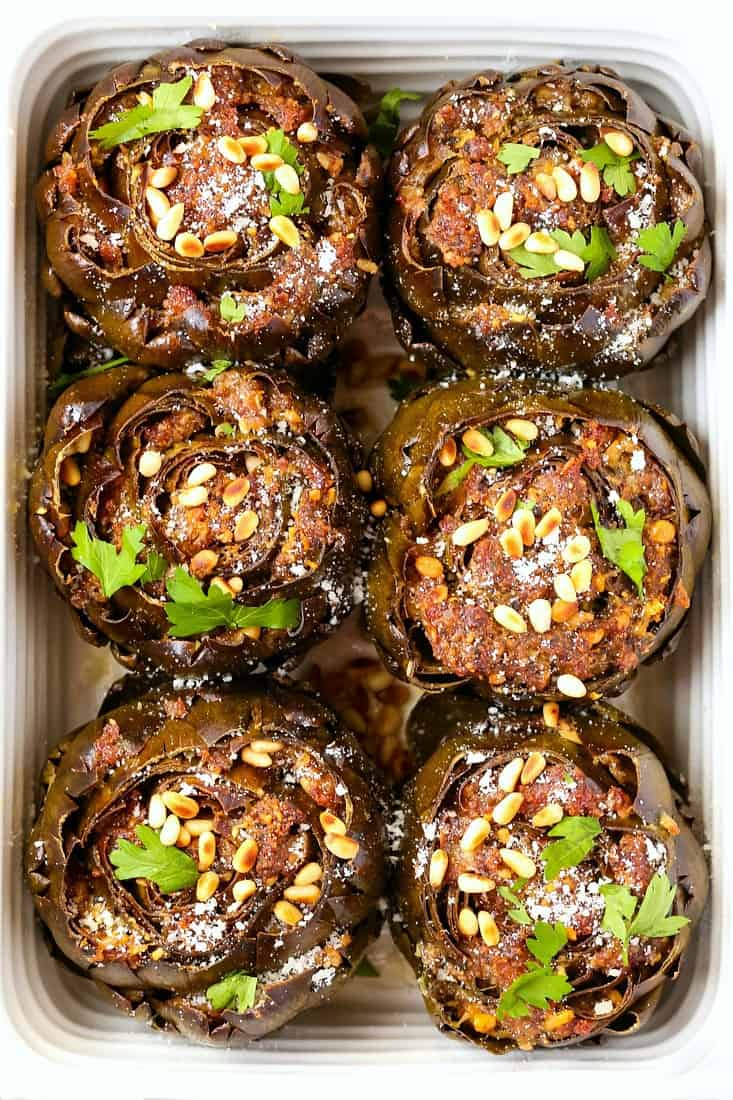 Stuffed artichokes are a holiday tradition in my family, but we like to eat them a lot more than just during the holidays. There’s so many different recipes for making artichokes, but these Grandma’s Best Stuffed Artichokes have a special place in my stomach.

The stuffing is made from Italian sausage, cheese and pine nuts. This artichoke recipe tastes like it’s straight out of an Italian cookbook. You can cook stuffed artichokes in the oven, like in this recipe here, or you can cook the same recipe right on the stove top. The cooking time is going to be about the same, it just depends on what you prefer doing.

Scared to tackle an artichoke recipe? I guess they do seem a little strange if you’ve never cooked them before but once you have you’ll see it’s really very easy. 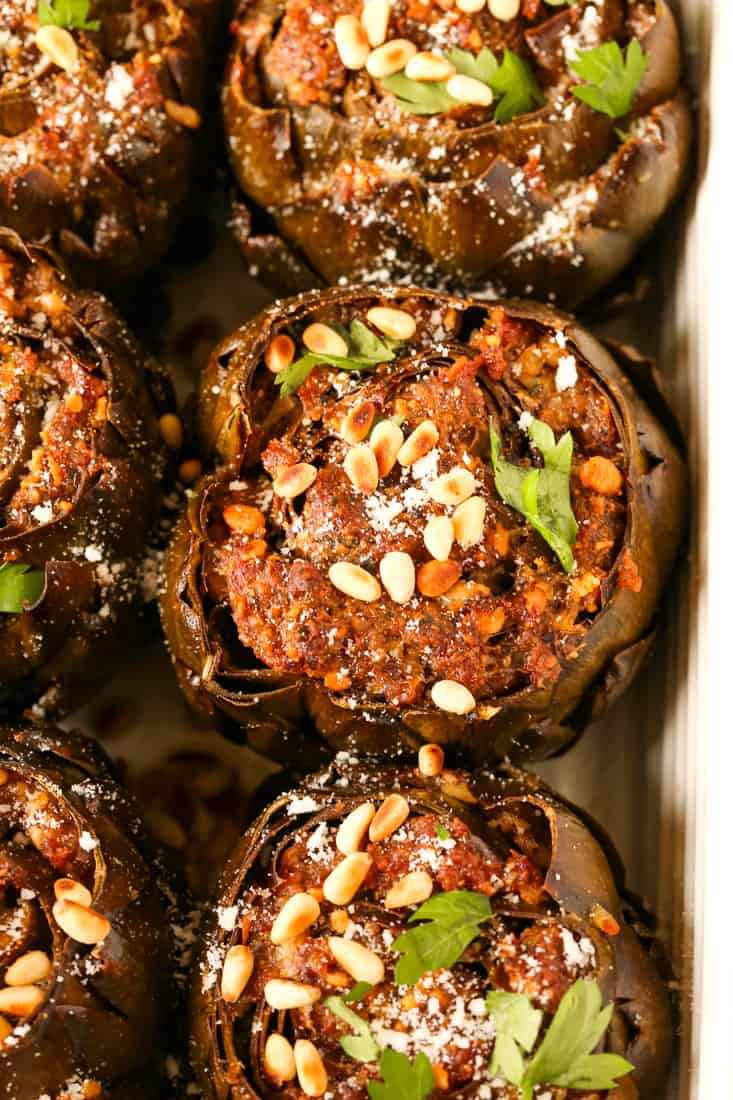 If you’d like to switch up the stuffing ingredients you can do that too! Great swap outs for Grandma’s Best Stuffed Artichokes could be spicy sausage instead of regular Italian sausage, or even pork sausage.

Or you can swap out the parmesan cheese for Romano and even throw in some mozzarella cheese! The one thing I wouldn’t recommend is swapping out the pignoli nuts. If you want to leave them out that’s totally fine but in my opinion that’s the nut for this artichoke stuffing. 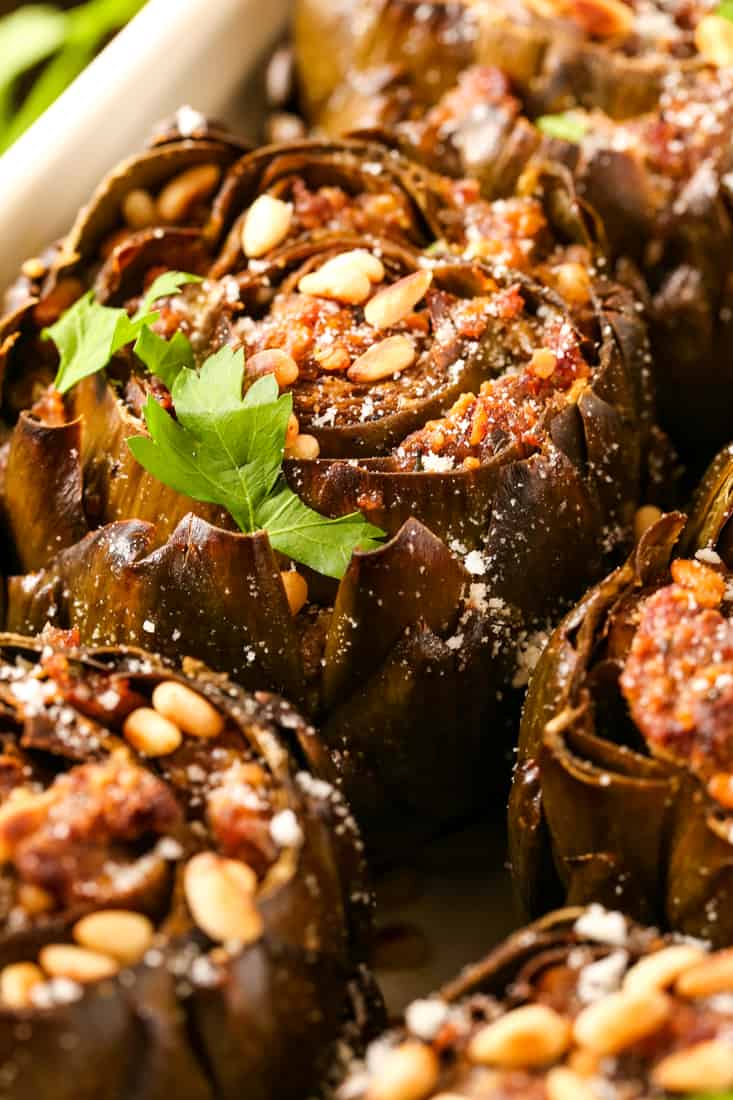 What Are Pignoli Nuts (Pine Nuts)?

Pignoli nuts or pine nuts  are actually the edible seeds of pine trees. There are over 20 different types of pine trees that produce this edible nut but we only harvest the ones that are large enough to eat.

Pine nuts can be used in many different recipes, sweet and savory. You can use pine nuts in cookies or cakes and chicken or meat dishes. And let’s not forget classic pesto sauce recipes – pine nuts are perfect for those.

These nuts do have a very buttery flavor since they are very high in oil. There is a slight piney flavor when you eat them, almost like an anise flavor, but not a super strong pine flavor by any means. 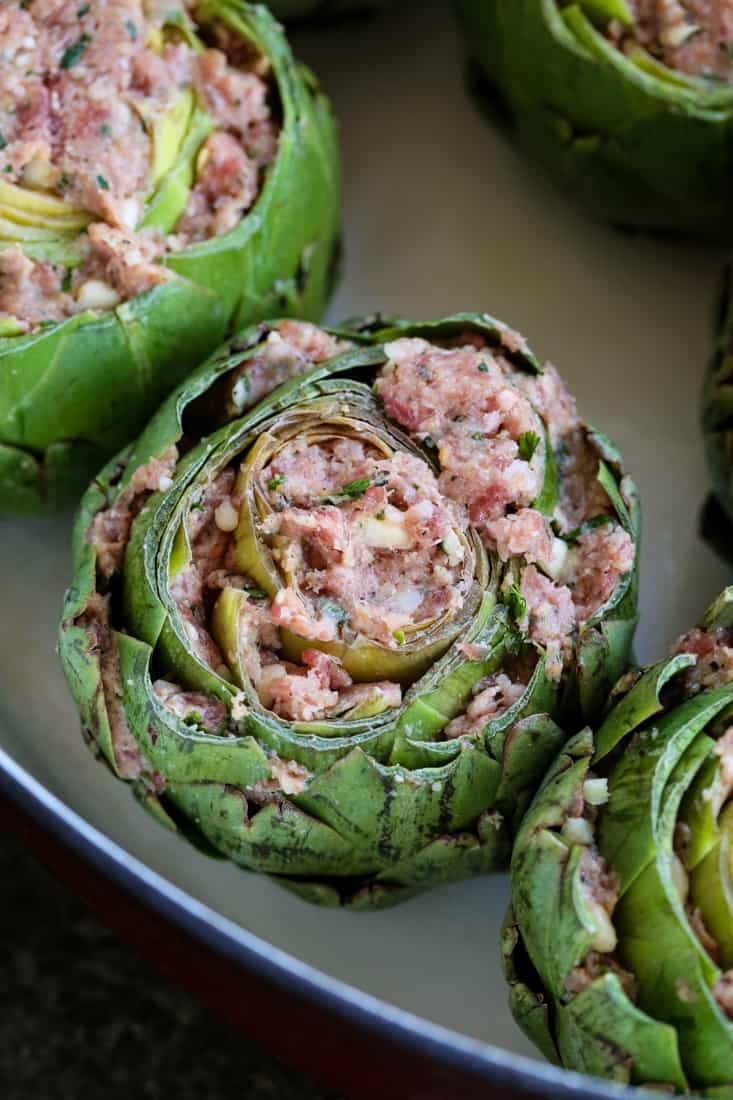 How Do You Cook Artichokes?

There’s a few different ways to cook artichokes. You can steam them or fry them, stuff them or roast them. It really depends on which way you like to eat them, and I like them all.

Next trim the stem off the bottom, making it flat so the artichoke can stand up straight in the pan.

If you’re not ready to stuff these artichokes and cook them, you can let them soak in lemon water so the cut parts don’t turn brown on you. Otherwise if you’re ready, you can start stuffing!

Once the artichokes are stuffed, place them in a covered dutch oven or roasting pan. The amount of water and wine you use will depend on the size and depth of your roasting pan, but you need one part white wine to 3 parts water.

The liquid should only come about halfway up the artichokes so they steam properly in the oven. Drizzle the tops with olive oil, season with salt and pepper, throw in a couple bay leaves and off to the oven they go. 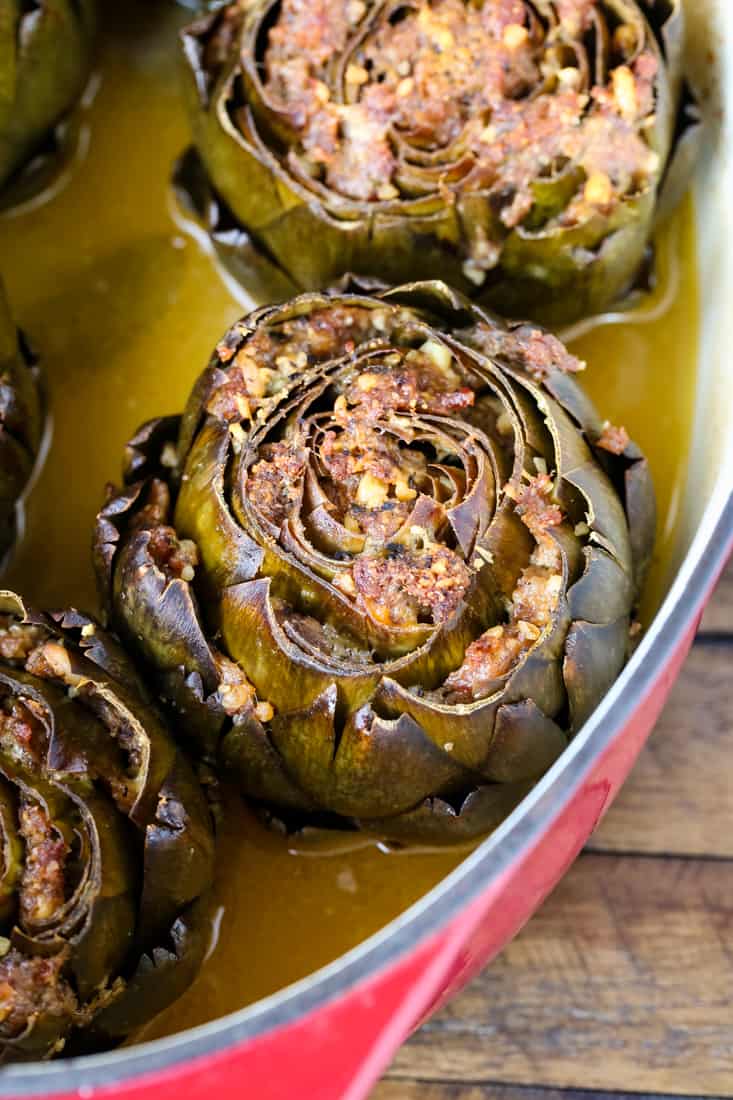 After about 1 hour you can check the artichokes by pulling out a leaf to see if it comes out easily and if the end of the leaf is tender. You’ll probably need at least another 30 minutes but I like to check them after an hour to see how they’re coming along.

Cooking artichokes also comes down to your preference. Like cooking pasta, an artichoke leaf can be too firm, al dente, or too mushy. Shoot for an al dente leaf, tender but still with a bite to it.

Mushy artichokes aren’t really good eating to me. Some do prefer them this way, but also some people just over cook them and that’s the way they come out.

So do check them after about an hour to see how much longer these stuffed artichokes need to go! 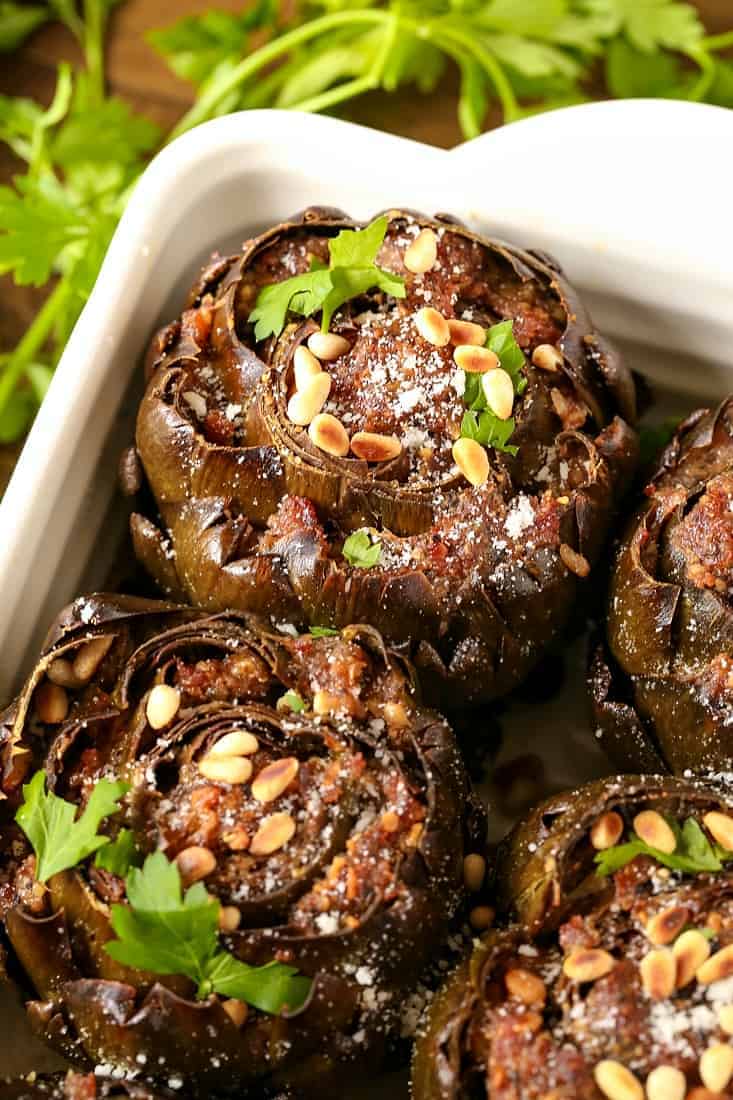 How Do You Eat Artichokes?

This might sound like a dumb question if you’re an artichoke fan and you eat them often but I promise you, there are people that have NO idea how to eat these things.

What you do is pull the leaves off the artichoke, get a leaf in your mouth and scrape the end of the artichoke off with your teeth. AND REPEAT.

For these sausage stuffed artichokes you’re also going to need a fork so that you can get all the stuffing up with each leaf, or just on its own. When all the leaves are gone it’s time to tackle the artichoke heart. 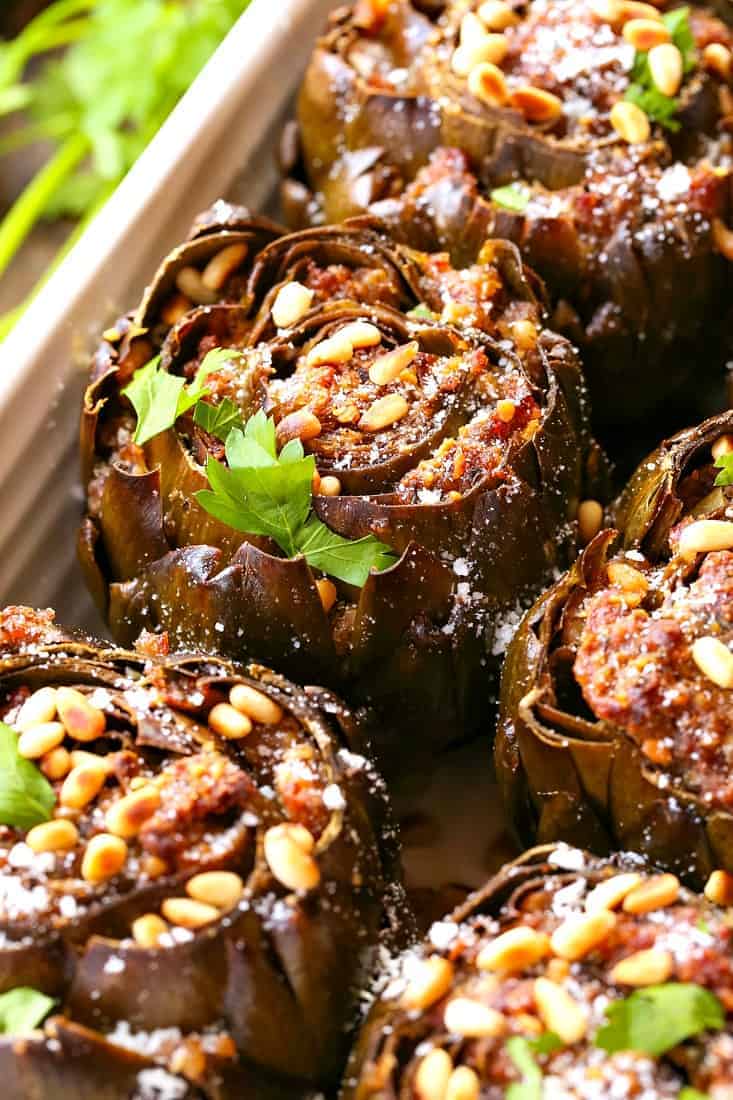 Cut off any of the “choke” that’s on the top of the heart. That’s the furry stuff that you don’t want to eat.

You can remove the choke before cooking, but it’s really a pain to do and it’s so much easier to scrape it off once the artichoke is cooked. Once you get through all the delicious sausage and cheese filling, you can either be done or get down to the delicious artichoke heart.

The easiest way to get to the heart (assuming you’ve already eaten all the leaves now, too) is to turn the bottom of the artichoke on its side and cut off the choke.

The super tender part on the bottom is the artichoke heart.

These Grandma’s Best Stuffed Artichokes are just like how Christie’s grandma used to make them, or her version of those. I always thought I was more of a basic garlic and cheese artichoke guy but I have to admit… 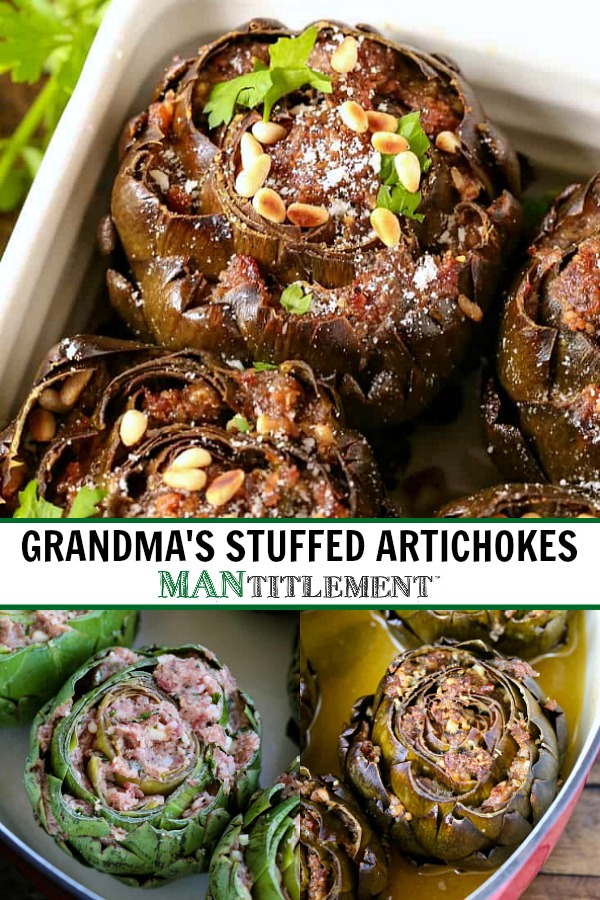 * Toast the pignoli nuts in a dry pan, moving around often until they turn slightly browned and fragrant.

* You can also cook these artichokes on your stove top. Bring to a boil then turn the heat down to a simmer over medium heat with the lid on but slightly ajar for some steam to release. The cooking time should be about the same.