This slow cooker stew doesn’t need anything on the side to make a complete meal, but try serving with buttery Garlic Bread to soak up every last bite! 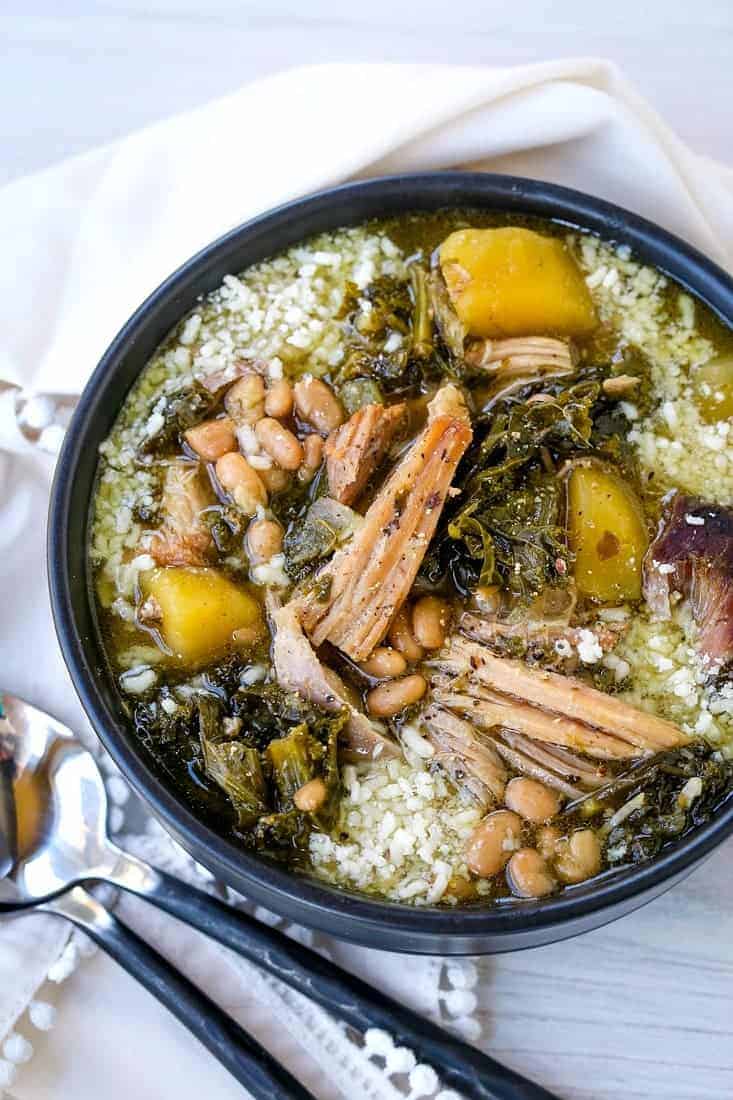 A Slow Cooker Pork Dinner The Whole Family Will Love!

I was actually surprised at how good this stew recipe came out when I first started looking at the ingredients. We found the inspiration for this recipe in a slow cooker magazine at the grocery store and we were kind of flipping through the recipes, doubting that a lot of them would turn out good since they were such simple recipes.

Well, don’t let a simple recipe fool you because this pork stew is so comforting and delicious we’ll be making it a lot. The pork comes out so tender, perfectly seasoned and perfectly shreddable without falling apart. Honestly you won’t be able to stop eating it while you’re shredding it for the stew.

A few potatoes, beans and kale add to the flavors of this slow cooker dinner, and if you think you don’t like kale, try it in this recipe because it turns out super tender, not tough at all.

Our boys love this stew with big hunks of crusty bread or garlic bread for sopping up all the broth or making shredded pork and bean sandwiches to shove in their mouths. This Slow Cooker Italian Pork Stew has definitely become a family favorite! 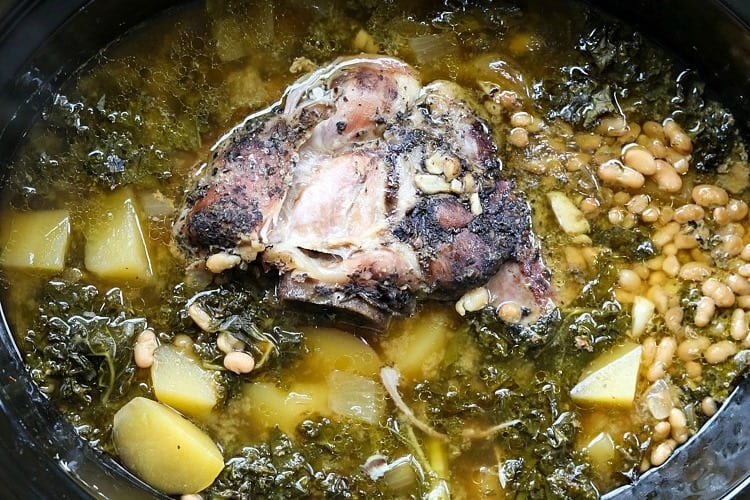 What Kind Of Pork Do You Use For This Slow Cooker Recipe?

Pork butt or pork shoulder works best in this stew, and I prefer a bone in pork shoulder. A boneless pork shoulder does tend to dry out, even in a slow cooker recipe so go for the cut with the bone in. The bone will add a little weight to the pork shoulder so you’ll want to grab about a 4 pound piece.

After the stew cooks for 8 hours on low, remove the pork from the slow cooker and let it cool slightly. Then shred the pork into large pieces, removing the bone, and add it right back to the stew.

Stew recipes usually have a thicker base to them, or a creamier broth but this recipe is so hearty and loaded with ingredients that calling it a soup doesn’t do it justice. One bowl of this stew and you’ll be satisfied for hours. 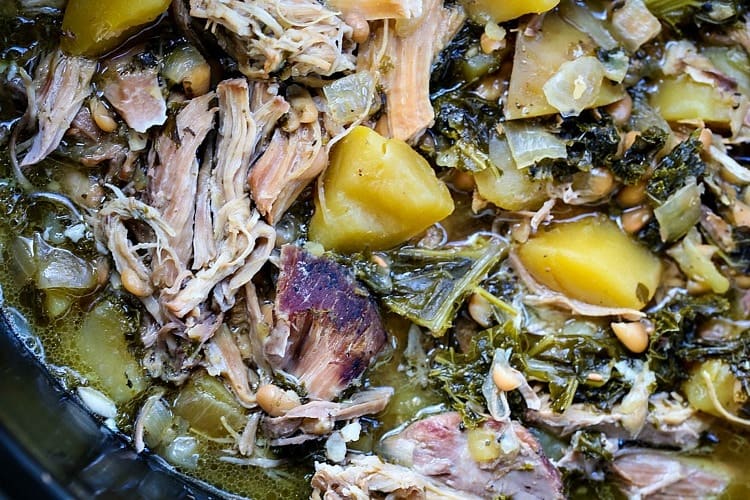 Can I Substitute Spinach For Kale?

If you really don’t like kale, you can use fresh spinach instead, just don’t add it in until the last hour of cooking. Spinach is much more tender than kale so it doesn’t need to break down in the slow cooker for 8 hours.

Just an hour at the end of the cooking time will do to get the spinach wilted into the broth. You can even use a couple of boxes of chopped frozen spinach if that’s what you have on hand. 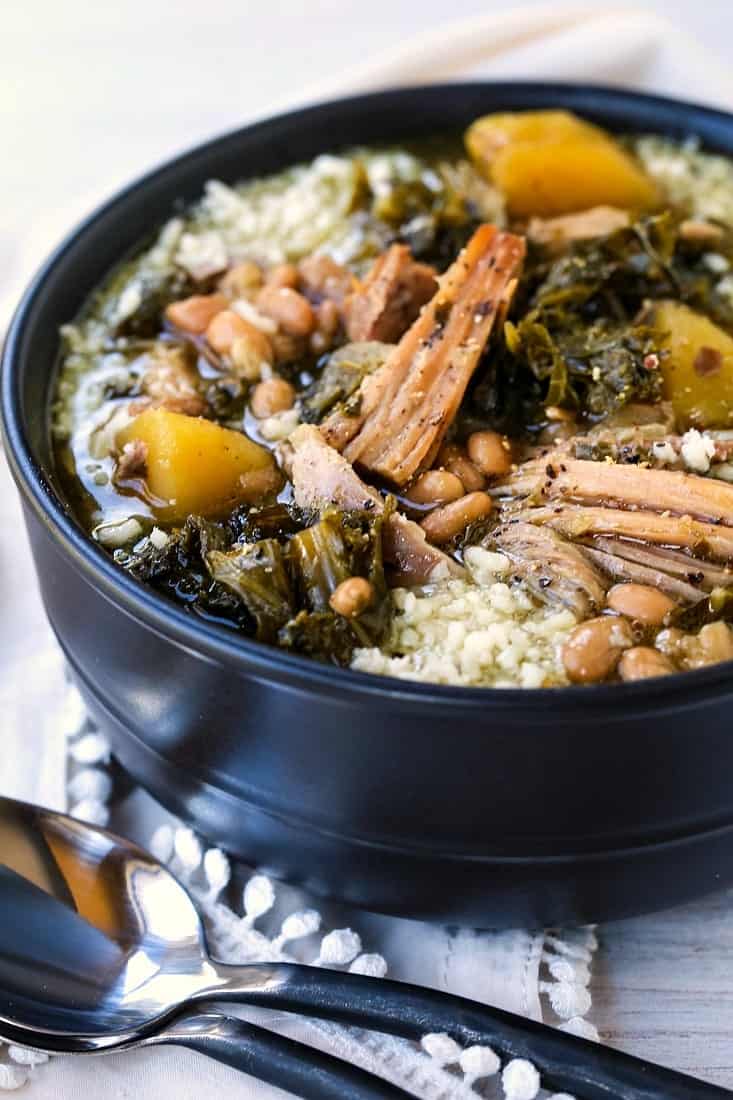 But do try the kale if you can. Kale adds so much flavor to this recipe, let alone the health benefits. Honestly, it’s not usually a favorite ingredient of mine but I really do love it in this stew.

Top this Slow Cooker Italian Pork Stew with fresh grated black pepper and lots of good parmesan cheese and you’ll have a dinner to remember!

This comforting shredded pork stew is broth based like soup, but so hearty with potatoes, beans and kale we had to call it a stew!

Combine all ingredients in a slow cooker and set on low for 8 hours.

Remove the pork from the slow cooker and set on a board to cool. Using a ladle, skim off any fat that’s sitting on top of the broth.

Shred the pork into large pieces (discarding the bone) and return it back to the slow cooker.

Taste the broth for seasonings and adjust if needed. Serve with grated parmesan cheese if desired.