These Mini Potato Skins with Pimento Cheese are a perfect appetizer recipe for parties! Were using a homemade pimento cheese to stuff these potato skins!

We love making epic party appetizers like these potato skins! Also check out this Garlic Butter Shrimp and these classic Bacon Wrapped Scallops! 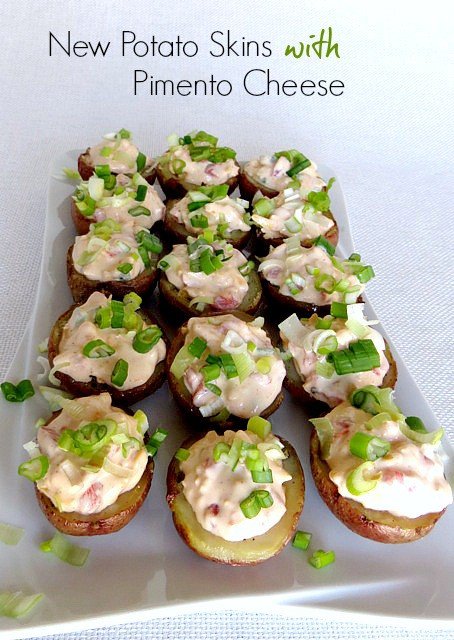 What Is Pimento Cheese?

I had first heard of pimento cheese when we had family visiting from Virginia. Pimento cheese, as you probably know originated in the South, maybe that’s why I hadn’t heard of it..

But if you’re from the South, apparently it’s one of those recipes that every family has their own version of.

The base recipe is usually the same, shredded cheddar cheese, mayonnaise, garlic and onion powder and of course pimentos. I used Cento® pimentos, they come in a small 4 ounce jar, all chopped up for you.

You can use pimento cheese as a spread to go alongside your cheese platter with some crackers or even in a grilled cheese sandwich. Pimento cheese is also often made with bacon. I left the bacon out of this pimento cheese recipe only because I wanted to do something close to the original recipe, but you could totally add it if you want.

In fact I think it would be awesome in these potato skins. You could crumble up some bacon and just sprinkle it on top when they come out of the oven. As they say, everything is better with bacon…

How Do You Make These Mini Potatoes with Pimento Cheese?

So you’re going to get a bunch of these small red or “new” potatoes, salt pepper and olive oil them up and throw them in the oven for about 1/2 hour.

While your potatoes are roasting, stir up the ingredients for the pimento cheese and put it in the fridge and chill. Some recipes say to beat the pimento cheese in a mixer with the paddle attachment, this makes for a smoother texture, but I thought stirring it well was just fine.

I used an extra sharp cheddar cheese because I like the sharpest cheese that I can find for this recipe. It seems to be the tanginess that sets this apart from other cheese spreads. This is the reason why I was told to use the juice from the pimentos also, you can use the juice from both jars if you want, it will just be slightly looser when it comes together. 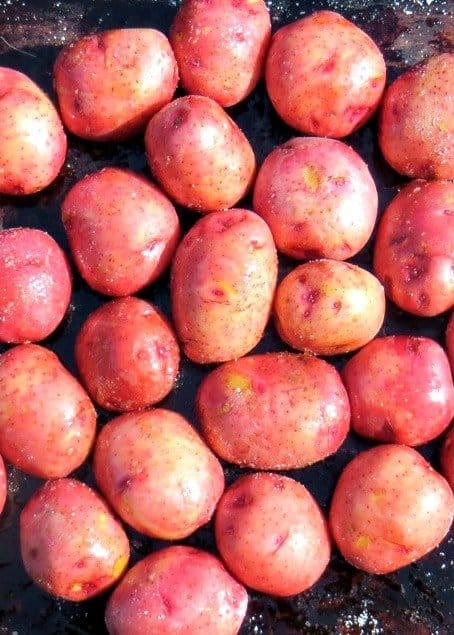 When they come out, split them in half lengthwise and scoop out a small center of the potato leaving a hole for the cheese.

You can save the leftover potatoes and mash them up later on for dinner. 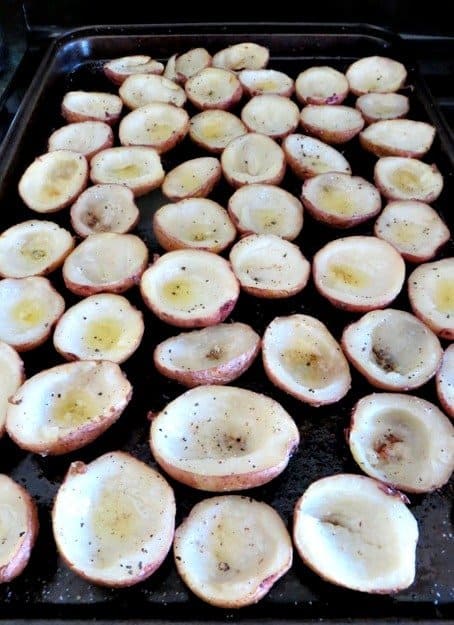 Then you brush the skins with some melted butter, put some salt and pepper on them and put them back in the oven to crisp up.

After they come out of the oven, let them cool and then fill the skins with a spoonful of your pimento cheese. 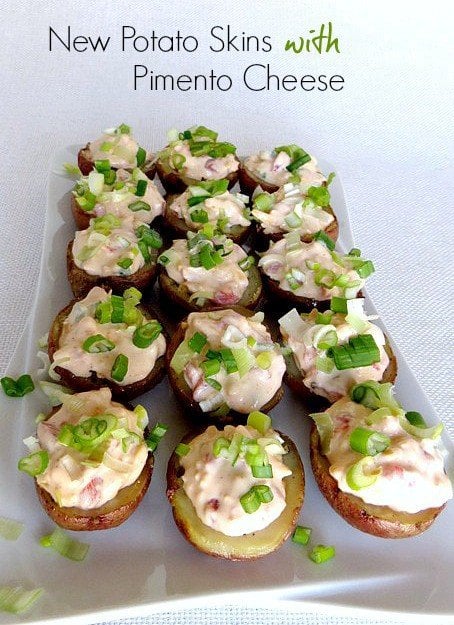 Put some scallions on top (and some crumbled bacon if you’d like) and dig in. These New Potato Skins are best served when the potato is still slightly warm and the cheese is nice and cold, but they are also great at room temperature so don’t worry about having them out at a party for a while- they won’t last long anyway!

These mini potato skins are stuffed with a homemade pimento cheese!

As an alternative, you can assemble these potato skins and put them under the broiler for 5 minutes. You can make the potato skins ahead of time and let them cool. stuff with cold pimento cheese and serve.