I’m getting ready for Mardi Gras this week with these Hurricane Jello Shots made with both light & dark rum! There’s nothing better than a boozy dessert! 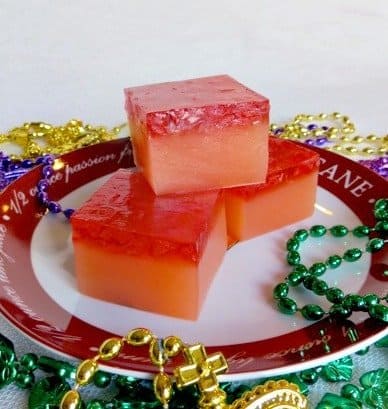 I’ve never been to New Orleans for Mardi Gras but the people I know who have been there say it is every bit as crazy as it’s hyped up to be. I’m not sure if Mardi Gras is something that I need to experience first hand, but I’d love to spend some time in New Orleans during the off-season.

Just walking down Bourbon St. must be an experience in itself. I was just reading about a bar called Laftitte’s Balcksmith Shop that is lit only by candlelight and fire. It was built in 1772, and is apparently haunted from what the locals say, but there’s a beer garden out back if it gets too spooky for you.

Then there’s Pat O’Brien’s. Famous for it’s Hurricanes but also Pat O’Brien’s has the best piano bar in New Orleans, or anywhere. I’d really love to go there someday just to drink a few Hurricanes and listen to the pianos play.

After a long night out you can head on over to Cafe Du Monde and get some strong chicory coffee and beignets -sounds pretty good to me.

One day I’ll try and get there, but for now I’m going to bring New Orleans to me with these Hurricane Jello Shots.

I have to warn you, these are no ordinary jello shots, they’re super strong. There’s 2 1/2 cups of Bacardi light and dark rum in one little 9×9″ pan.

They also taste exactly like a hurricane- fruity but not too sweet- and did I mention strong?

There’s a layer of chopped cherries on top infused with a cup of dark rum and the bottom layer has mango nectar mixed with pineapple-coconut nectar, orange juice and some lime juice to balance out the sweetness.

And also another cup and a half of rum.

I think these would be great set out on a tray at a party, or served with coffee and dessert. 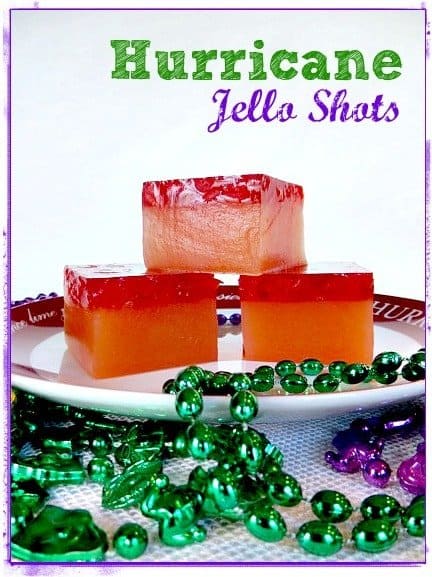 So try these Hurricane jello shots for your next get together and bring some Mardi Gras into your home.

I’m getting ready for Mardi Gras this week with these Hurricane Jello Shots made with both light & dark rum!

For the first layer

For the second layer