I had these Fried Oysters with Bacon-Horseradish Hollandaise at the NYY Steakhouse and I fell in love with them! Here’s my version of this epic appetizer! 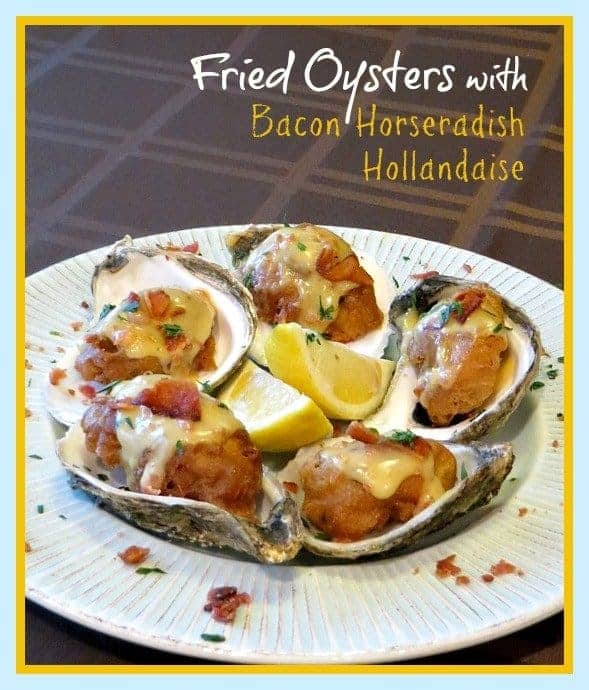 Oysters are always something that I have when I’m out at a restaurant but I never seem to make them at home. So today I thought I’d change that and make myself some fried oysters.

I say “myself” because no one else in the house will eat them. Strange, but true.

I drove to a seafood market about a half an hour from my house to get fresh oysters. I was pretty surprised to find out that oysters really aren’t all that expensive. They were about a buck an oyster. Not bad I thought, especially since I only need a dozen.

Then onto the grocery store for the rest of the ingredients. I wanted to do a bacon-horseradish hollandaise sauce like they have at Yankee Stadium because the spicy horseradish goes so well with the deep fried oyster. And bacon is just good with anything.

Do I really want to make the hollandaise from scratch? I know it’s not too hard but I’m standing right in front of the Hollandaise sauce packets…so in the basket they go.

Grab some bacon, horseradish, and lemons and I’m done.

Please feel free to make your own hollandaise sauce but I’ll tell you, using a packet and fixing it up a bit tastes just as good. I actually think it tasted better than the sauce I had at Yankee Stadium and I’m pretty sure theirs was from scratch.

How Do You Make This Fried Oyster Recipe?

Make up the hollandaise sauce in a small pan. Then fry up a few slices of bacon, chop them up finely and add to the pan.

Add horseradish, or more if you like it really spicy, a tablespoon of fresh lemon juice and your sauce is done.

Next I threw together a quick beer batter, dip the oysters in and start frying. 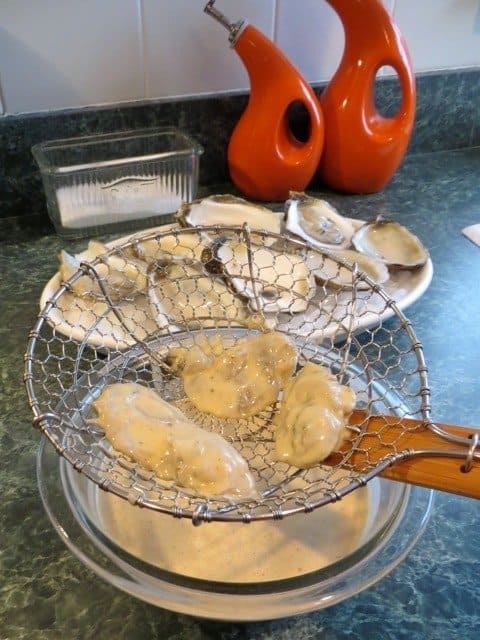 The oysters only take about 3 minutes to fry, this is where you have to make sure that your oil is at the right temperature so that you don’t overcook the oysters.

Once you have fried all the oysters, serve them with a spoonful of the bacon-horseradsih hollandaise on top and some more bacon and parsley.

All you need now is a squeeze of lemon and a cold beer. Or two.

For the Beer Batter

The beer batter in this recipe will coat at least 2 dozen oysters, so you can easily double or even triple the amount of oysters that you need.