This Pear Vanilla Martini is a sweet martini with pear infused flavors. Shake this fancy martini up at home and you won’t have to spend the money out! 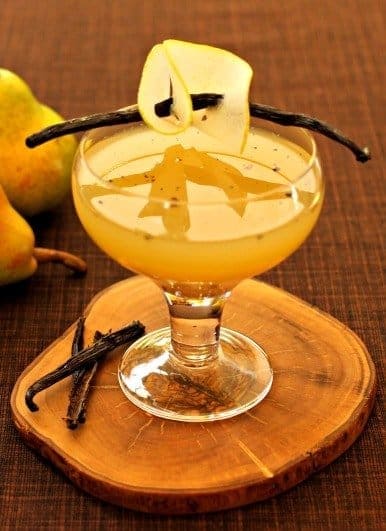 Not that I mind going out and spending money on a good meal and drinks every now and then. But sometimes you just want to stay home and relax.

Not worry about a sitter or what dress shirt you have clean…just make up a few martinis and watch the game. Or whatever movie the wife ordered up on Netflix.

I’ve never bought an actual vanilla bean before – and good thing I haven’t need to before because these things are expensive!

Really, it’s like 13 dollars for 3 vanilla beans. But still, that will make 6 of these pear martinis…still cheaper than paying for one at a restaurant.

We don’t get into NYC too often, but when we do we do it right, Eataly, Del Posto, Delfrisco’s. All expensive places – but all worth it once in a while. When I say once in a while, I mean like once a year, or two. With the exception of Eataly…I try to get there as often as I can!

But when it came time to do another cocktail for Food Fanatic, I thought of our recent trip to the city, and all the pricey cocktails. So with this Pear Vanilla Martini recipe you can make up a batch right in your own kitchen. For half of what you would have to pay ordering it out.

Click over to Food Fanatic for the full post and recipe, and check out some of their other food and drink recipes too…like how about these Baked Chili Cheese Fries?

Now everyone’s happy. My wife can have her fancy martini’s – and I can have some beer and a platter of those chili cheese fries.

This delicious pear martini is one of our favorite martini recipes to serve at parties!